Correlation found between evolution of higher brain center, behavior in hymenopteran insects Did diversification of nerve cells in insect brain give rise to behavioral evolution? 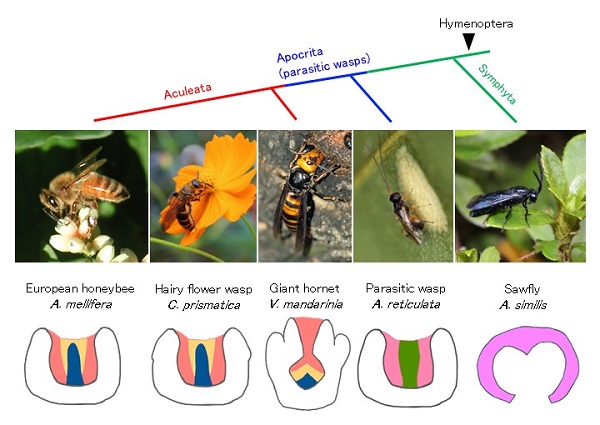 Researchers at the University of Tokyo and their collaborators have demonstrated that the number of subtypes of neurons called Kenyon cells that constitute the higher center of the insect brain, known as mushroom bodies, has increased according to the behavioral evolution in the hymenopteran order of insects, which includes bees, wasps, ants, and sawflies.

The order Hymenoptera comprises many insect species exhibiting various behavioral traits. The most primitive of these insects, such as the sawflies belonging to the suborder Symphyta, are solitary and feed on plants. The more evolutionarily advanced parasitic wasps are also solitary, whereas the highest lineages belonging to the Aculeata group, including hornets, scoliid wasps, ants, and honeybees, which exhibit nesting behavior, are both solitary and social. The evolution of the higher brain center that underlies the behavioral evolution of such hymenopteran insects is largely unknown to scientists.

In insect brains, the mushroom bodies are a higher-order center for sensory integration and memory. In the present study, graduate students Satoyo Oya and Hiroki Kohno and Professor Takeo Kubo of the Graduate School of Science at the University of Tokyo demonstrated that the number of Class I Kenyon cell subtypes that make up the mushroom bodies increases from one to two to three, in correlation with the behavioral evolution from phytophagous (plant-eating) to parasitic to nidificating (nest-building) in hymenopteran insects. This finding suggests for the first time that an increase in the number of Kenyon cell subtypes underlies the behavioral evolution in hymenopteran insects; it further provides insights into the mechanisms of behavioral evolution of animals in general. The acquisition of nesting behavior, in particular, is of great interest as it has been observed in various higher animal species, and it could be a prerequisite for the subsequent evolution of social behavior. Further elucidation of the function of each Kenyon cell subtype promises to help unveil the mystery of the behavioral evolution of hymenopteran insects.

The current findings are the result of a research collaboration with Professor Yooichi Kainoh at the University of Tsukuba and Professor Masato Ono at Tamagawa University.