The most important events among the series of official activities conducted during the Nobel Week, the Nobel Prize Award Ceremony and the Nobel Banquet, are held every year on the anniversary of Alfred Nobel's death, December 10th. Professor Kajita and the other Nobel Prize recipients took part in rehearsals for the Ceremony at the Stockholm Concert Hall this morning, which is where the actual Ceremony would take place later in the day. 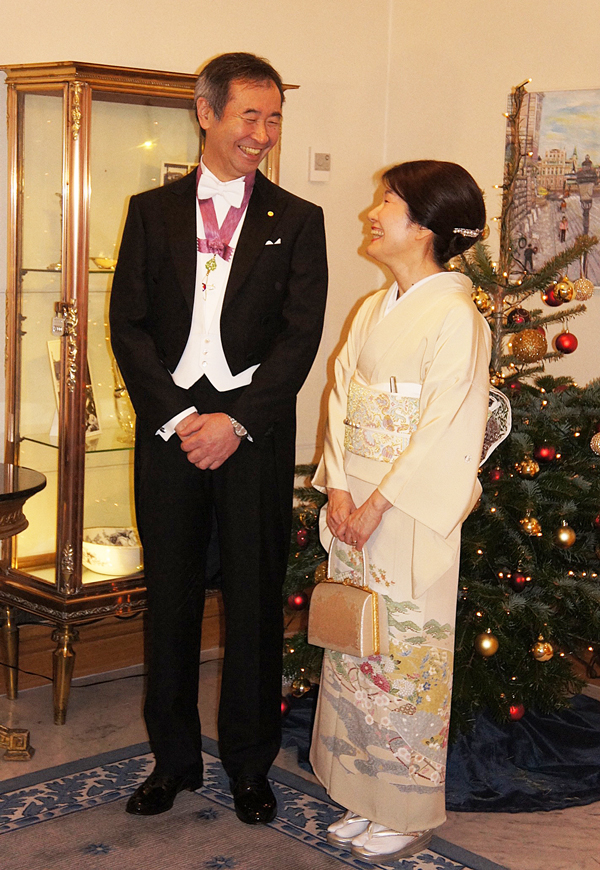 Professor Kajita and his wife before attending the Nobel Prize Award Ceremony and Banquet, posing for photographs for the media

The Nobel Prize Award Ceremony was held from 4:30 PM at the Stockholm Concert Hall. The Ceremony commenced with the Royal Stockholm Philharmonic Orchestra performing Sweden's national anthem. The orchestra then played a waltz as Professor Kajita and the other Nobel Prize recipients made their entrance from the center of the stage. Uppsala University Professor Olga Botner, member of the Nobel Committee for Physics, commended Professor Kajita and co-winner Professor Emeritus Arthur B. McDonald for their achievements, stating that they "have been awarded the Nobel Prize in Physics for their discovery of neutrino oscillations, which shows that neutrinos have mass." Next, Professor Kajita received his Nobel Medal and Diploma from His Majesty King Carl XVI Gustav of Sweden and shook hands with the King. The professor then turned to bow to the audience, which responded with a large round of applause.

After the Ceremony, Professor Kajita and his guests headed to the Stockholm City Hall to attend the Nobel Banquet held there. As they entered the Blue Hall for the Banquet, Professor Kajita escorted Princess Sofia, while Mrs. Kajita was escorted by King Gustaf. The Banquet began with a toast proposed by Uppsala University Professor Carl-Henrik Heldin, chairman of the Nobel Foundation, followed by a toast proposed by King Gustaf.
The Banquet lasted for about four hours with a variety of Swedish music being performed at intervals throughout.

*【Nobel Week】 is a special series of reports given during the Nobel Week.
*You can read articles about the other Nobel Week activites here: http://www.u-tokyo.ac.jp/en/general/nobel_index.html