Diving into Marine Science at the 8th UTokyo Research, On Site Event

The eighth UTokyo Research, on site event* took place at the Graduate School of Frontier Sciences (GSFS) and the Atmosphere and Ocean Research Institute (AORI) on UTokyo's Kashiwa Campus on Thursday, March 9th, 2017. Fifteen guests (eight journalists, two press officers and five science attachés from foreign embassies) attended this event, which highlighted marine science research conducted at the University. Following opening remarks from Professor Shinji Suzuki, director of the Public Relations Office, presentations were given by Professor Hiroyasu Hasumi of AORI and Associate Professor Hiroyasu Satoh of the GSFS on their respective organizations. Then, after conversing with professors and fellow participants during a coffee break, the attendees went on guided tours of three laboratories. 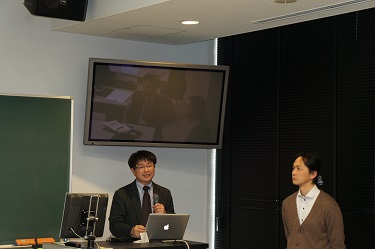 
The migration of Japanese eels was the subject of the tour led by GSFS Professor Shingo Kimura. While the spawning ground of American and European eels had been known since the early 1920s, that of the Japanese eel remained a mystery until 1991, when a group of researchers at UTokyo that included Professor Kimura discovered the location. After talking about this research, as well as studies he currently conducts relating to eels, Professor Kimura took the attendees to his laboratory aquarium to see—and touch—live Japanese eels.

Professor Katsufumi Sato of AORI and two of his lab members introduced bio-logging research in their tour. “Bio-logging” refers to a method of research in which miniaturized cameras and video recorders are attached to animals to log data about their movements, physiology, behavior and surrounding environment. The tour focused on his laboratory’s efforts to monitor marine life, particularly their work on whales and sea turtles. They demonstrated how they use a long pole to put recording devices on sperm whales, and they also showed video footage taken by devices attached to sea turtles which gave insight into the turtles’ feeding habits. 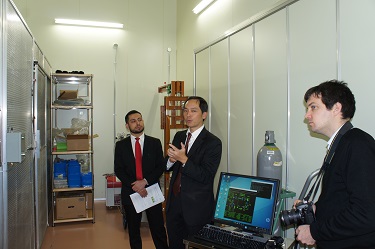 
The third tour, led by AORI Professor Yusuke Yokoyama, was about radiocarbon analysis of marine organisms. By using the Single Stage Accelerator Mass Spectrometer installed at AORI’s Analytical Center for Environmental Study, researchers can uncover the “fingerprints” left by organisms on coral and other such materials. Analyzing these “fingerprints” enables them to determine with high precision when ecological and climatological phenomena occurred in the past. For instance, by analyzing samples of coral, Professor Yokoyama and his colleagues were able to discover several theretofore unknown tsunamis. After explaining the sample analysis process from the control room and the laboratory, Professor Yokoyama took attendees to see the massive spectrometer itself, the only one of its kind in Japan.

This event presented a unique opportunity for attendees to visit the Kashiwa Campus, one of UTokyo’s three main campuses and a hub for cutting-edge research. In addition to having the chance to see some of the University’s laboratories, the on site event also provided a fruitful forum for discussion between attendees and researchers, facilitating collaboration and the communication of scientific research.


* UTokyo Research, on site is an event organized by the University of Tokyo's Division for Strategic Public Relations with the aim of introducing the University's research in English to Japan-based international journalists, foreign embassy science attachés and other such individuals.