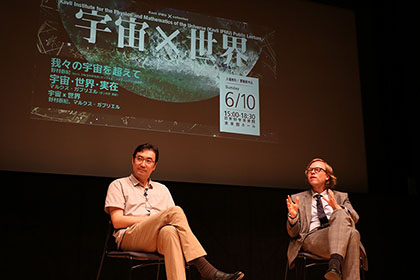 The Kavli Institute for the Physics and Mathematics of the Universe (Kavli IPMU) hosted such a public lecture, titled "Universe X World" at Tokyo's Miraikan science museum on June 10, featuring the talk "Beyond the Universe" by theoretical physicist and Kavli IPMU Principal Investigator / UC Berkeley Professor Yasunori Nomura, and the talk "Universe. World. Reality." by philosopher and University of Bonn Professor Markus Gabriel.

Despite an oncoming typhoon, 900 people braved the weather or watched from home as the two academics talked about their fields and their own research, before having a face to face discussion which explored the similarities between science and philosophy.

Nomura's lecture challenged the audience's understanding about what science is. He started by explaining how reductionism has helped uncover the very details of our Universe, which have been confirmed by various observations. Based on these observations, it is usually assumed that on average, the Universe is homogeneous everywhere . However, the multiverse theory provides quite a different view. This view is suggested by modern physics theories. For example, it turns out that the existence of extra dimensions in superstring theory, and the eternal nature of inflation - both of which had been viewed as nuisances - are in fact important elements leading to the multiverse.. The multiverse theory picture also gives an answer to the problem of dark energy, explaining its size in the present Universe.

The multiverse predicts that the spatial curvature of our Universe is negative, though it does not tell us how negative it is. The precision of observing the spatial curvature of our Universe is expected to improve significantly in the next decade or two. If a future observation found that the curvature is positive, then the multiverse theory, as described here, would be falsified. The fact that it could be falsified provides strong support for the claim that the multiverse theory is science.

Nomura continued to talk about his work on the quantum multiverse, and the implications of the late Stephen Hawking's black hole information paradox for cosmology. He introduced his more recent attempt to redefine our concept of space and time, and also discussed the future of our Universe. He concluded by saying that human history had multiple moments in which our basic concepts were revised.

Gabriel first commented that it is no coincidence that Nomura’s depiction of the “multiverse” and his idea of the philosophical logical space have a similar form. The main part of the talk consisted of a negative and a positive proposal.

The negative proposal was that the world does not exist. Three conceptions of the world were considered:
(1) The world is the totality of objects. This idea is rejected on the grounds that there is no theory-independent way of individuating objects.
(2) The world is everything that is the case; it is the totality of facts, not of objects. But a totality of facts would look like a set of all sets, which mathematical logic has shown does not exist.
(3) The world is a domain of all domains. Each domain of objects is governed by its own rules, which is called “sense.” What then is the sense of the domain of all domains? One possible answer is existence. But since this does not solve the problem at all, this too is rejected.

According to his positive proposal, reality is a meshwork of locally overlapping fields of sense without a global context of all contexts. One implication of this is that all we can study is the locally overlapping structures. Another implication is that the 3000-year-old Aristotelian logic, which is at the root of the idea that a totality exists, must be rejected.

The dialogue mainly focused on reductionism and determinism regarding physical laws and human interactions.

After the event, the audience was invited to join Nomura and Gabriel for tea time, where the two speakers found themselves surrounded by members of the public eager to have their own questions answered by the two researchers.

Comments from participants included the following.

"It was interesting to see the similarities unfold between the universe and philosophy. The content itself was difficult at times, but was very enlightening. It was also enjoyable to be so close to the speakers."
"A greatly satisfying discussion."

Inquiries about the content of this page: Kavli Institute for the Physics and Mathematics of the Universe