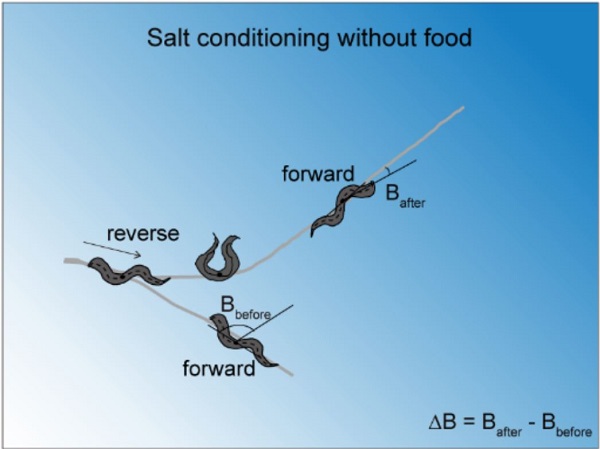 As you enjoy this article, you may be using your sense of vision or hearing to understand the words, your sense of touch to scroll down the page and your sense of balance to not fall over. Integrating multiple sources of sensory information is essential for all living things to successfully interact with their environment. Even humble nematode worms use multiple sensory inputs to detect and steer away from environments where they were starved previously.

Experts at the University of Tokyo who use genetic techniques to understand animal behavior study nematode worms called C. elegans because each of the 959 cells in the animals' transparent, 1 millimeter-long bodies has been identified and mapped. All throughout their two-week life span, the animals can learn to avoid or pursue different cues in their environment to find food more quickly.

"The phenomenon of memory controlling behavior is common in animals, including humans," said Professor Yuichi Iino from the Department of Biological Sciences at the University of Tokyo.

C. elegans wriggle to move forward, reverse directions, or turn randomly. When the worms notice an especially attractive taste or smell, they will change direction to pursue it. The worms' unique dance moves for changing direction are called the pirouette and weather-vane behavioral strategies.

The pirouette behavior is an abrupt stop-and-spin sequence of movements such as forward-reversal-turning-forward. In the more gradual weather-vane behavior, the worm curves toward what is attracting it while still moving forward.


Researchers can train groups of C. elegans to associate different amounts of salt with starvation. In an unfamiliar environment, worms quickly pirouette or weather vane away from that familiar, starvation-associated amount of salt because the salt lying in that direction reminds them of hunger.

The C. elegans brain has 302 nerve cells and multiple sensory neurons that sense the environment. The neuron primarily responsible for detecting salt is called ASER. A second neuron, ASG, senses direction and is active when worms pirouette, but does not detect salt itself.

Worms that are genetically modified so that ASER is the only active sensory neuron can still follow a trail of salt to food, if that's what they've learned. However, the same worms cannot learn the opposite lesson; they cannot learn to turn away from salt when it leads to starvation.

In other experiments, worms' ASG neurons were left intact, but the research team used a technique called optogenetics to express a light-gated ion channel in ASER neuron so that the ASER neuron could be turned active or inactive with a literal flip of a light switch. Worms that had learned to associate salt with starvation would pirouette whenever ASER was reactivated, mimicking the salt avoidance behavior. 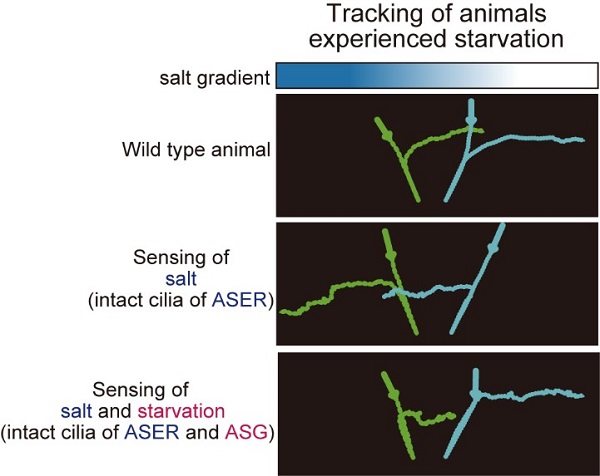 "Both salt and direction-sensing neurons must integrate different sensory information so that worms can learn to avoid the amount of salt experienced during starvation," said Project Researcher Moon Sun Jang, first author of the recent research publication and a member of the Iino laboratory.

Projects like this help researchers begin to understand how individual nerves connect together and integrate different sensory information to allow memory, learning and complex behaviors.

"We hope to pursue the path of sensory integration to other neurons and understand how the nerves communicate in C. elegans," said Jang.