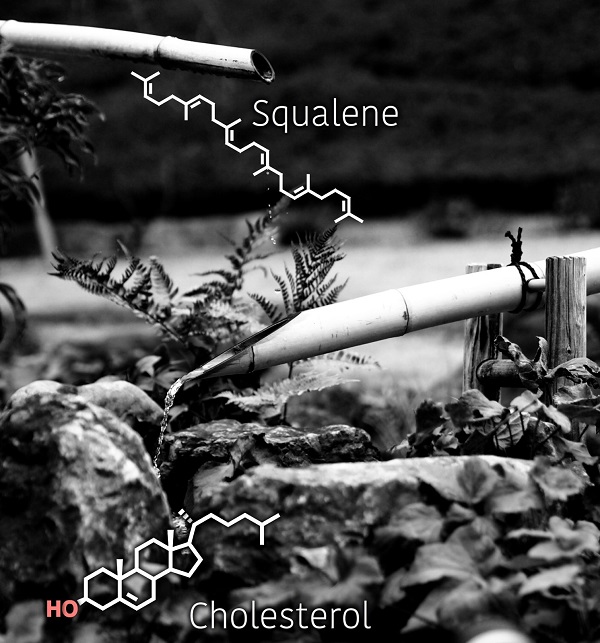 A shishi-odoshi is a traditional device often found in Japanese gardens, made of a bamboo tube that slowly fills with trickling water and then pours the water out via a seesaw movement and makes a clanking sound upon returning to the initial position. Researchers say that the shishi-odoshi reminds them of the accumulation of squalene protecting its metabolic enzyme from degradation to increase the capacity of cholesterol biosynthesis. © Kenji Ohgane, CC BY 4.0

Researchers based at UTokyo and RIKEN in Japan, and the University of New South Wales in Australia have uncovered a new aspect of one of the molecules involved in cells' production line to build cholesterol. This understanding could provide a new target for high-cholesterol medications and other drugs that kill pests like athlete's foot fungus or agricultural weeds.

The molecule at the focus of the study is the essential unsaturated fat squalene, a precursor of complete cholesterol molecules. About 100 years ago, the Japanese scientist Mitsumaru Tsujimoto first identified squalene in liver oil from dogfish sharks, scientifically known as Squalidae.

"Cholesterol synthesis is expensive for cells, meaning it requires a large number of molecules of oxygen and the energy currency of cells called adenosine triphosphate (ATP)," said Assistant Professor Kenji Ohgane from the Institute for Quantitative Biosciences.

Ohgane says that this large expense has given cells a strong reason to create layers of control to regulate cholesterol synthesis. The best-understood control mechanism is regulating transcription of the DNA code when cholesterol levels are high in cells.

However, recent research efforts led by Professor Andrew Brown at the University of New South Wales, a co-last author on the recent research paper, identified another control method that involves cholesterol directly degrading one of the molecules that help build it. Specifically, high levels of cholesterol will degrade the enzyme squalene monooxygenase, which is responsible for attaching an oxygen to squalene as part of cells' cholesterol production line.

Failures of any of these layers of regulation can mean that cholesterol levels become abnormally high, regardless of a person's diet.

Since the 1990s, the drug terbinafine and others have killed fungi by attacking a specific part of squalene monooxygenase called the catalytic site, essentially blocking the cells' cholesterol synthesis pathway.

Ohgane and his colleagues have now described a new part of squalene monooxygenase to attack – an area that recognizes squalene.

"At the start of our research project, we actually thought our initial results that squalene stabilizes and increases amounts of squalene monooxygenase were not very interesting, because it is well-known that inhibitor molecules stabilize their target enzymes," explained Ohgane. 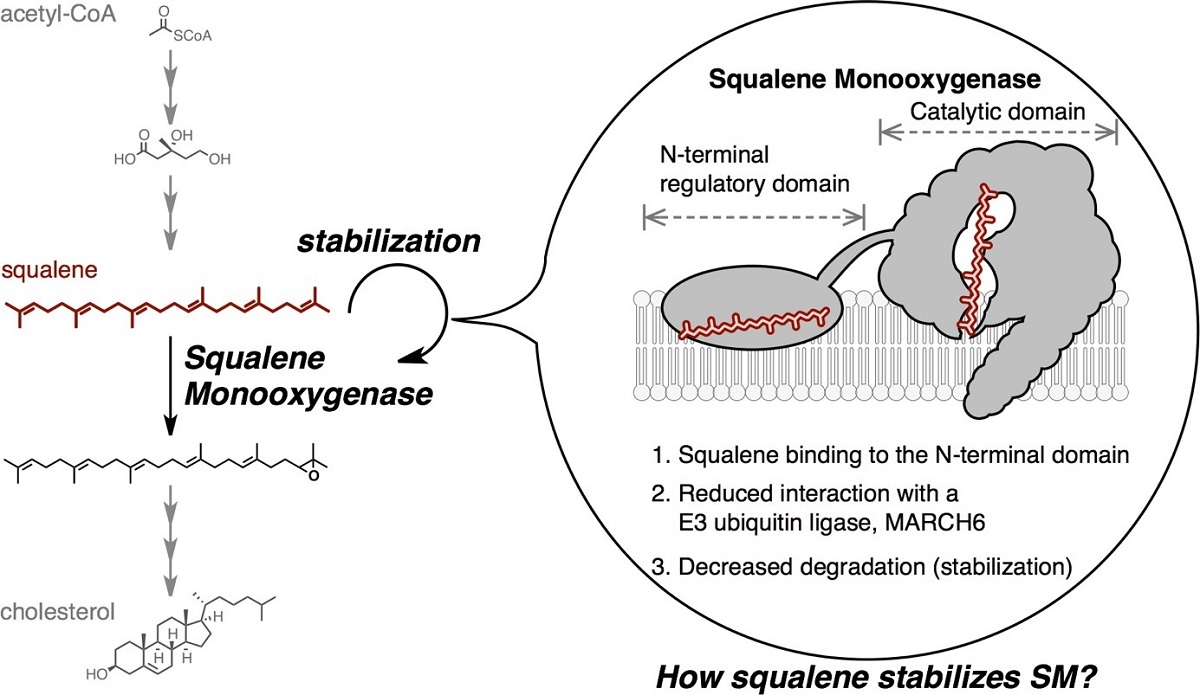 However, Ohgane explains that an essential element of scientific thinking is doubt and the need to recheck results.

"If we had not felt that slightest doubt on the result, the project would have been thrown away at that point," he continued. "We were just casually performing one experiment to verify those initial results, and it was then that we realized our observation was actually a new phenomenon."

Researchers identified this squalene recognition area by searching through a chemical library of molecules that interact with squalene monooxygenase and alter its stability. Other experiments included direct biological manipulation using photo cross-linking, which suddenly locks together any molecules that happen to be interacting when researchers deliver a flash of light.

"We found the recognition region to be essential and adequate for stabilizing normal squalene monooxygenase. Our results offer an alternative strategy for cholesterol synthesis inhibition by targeting the squalene recognition region, a noncatalytic site," said Ohgane.

Additional projects will be needed to understand potential utility of the squalene recognition area of squalene monooxygenease as a drug target for manipulating cholesterol synthesis for human health or pest control.

"We feel intrigued by all of the unknowns that still exist especially within the well-known biosynthetic pathway of cholesterol," said Ohgane.