Identification of an existing Japanese pancreatitis drug, Nafamostat, which is expected to prevent the transmission of new coronavirus infection (COVID-19) 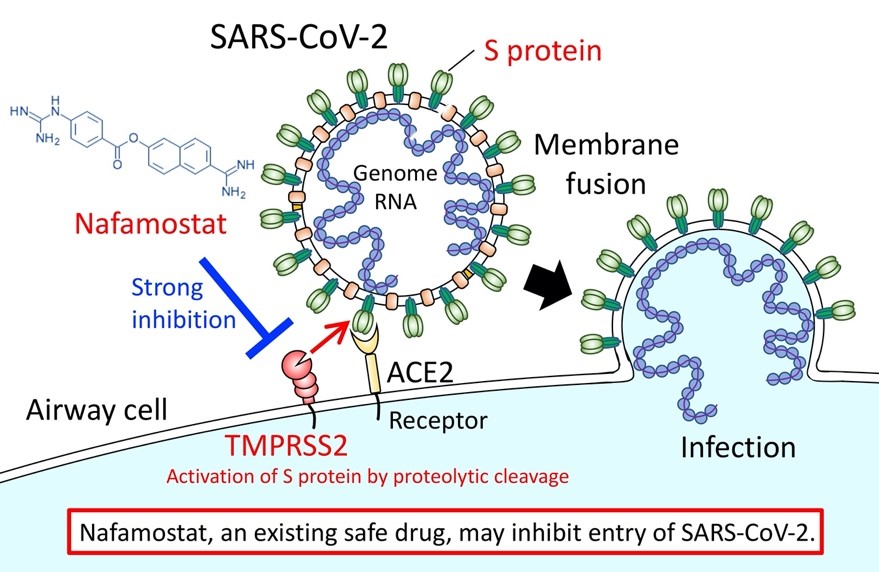 Nafamostat, an existing safe drug, may inhibit entry of SARS-CoV-2. Image: 2020 The University of Tokyo.

Nafamostat mesylate (brand name: Fusan), which is the drug used to treat acute pancreatitis, may effectively block the requisite viral entry process the new coronavirus (SARS-CoV-2) uses to spread and cause disease (COVID-19). The University of Tokyo announced these new findings on March 18, 2020.

According to the new research, Nafamostat can prevent the fusion of the envelope of the virus with host cell surface membranes, the first step in infection with the causative virus SARS-CoV-2. Nafamostat can inhibit the membrane fusion at a concentration less than one-tenth that of Camostat mesylate (brand name: Foypan), which was recently identified by a German group as an inhibitor of SARS-CoV-2 infection (Reference 1).

Both Nafamostat and Camostat were developed in Japan as treatments for pancreatitis and some other diseases. These drugs have been prescribed in Japan for many years and have adequate clinical data with regard to safety.

The University of Tokyo plans to launch clinical trials in April 2020 in order to evaluate the effectiveness of these two drugs for treating COVID-19.

Professor Jun-ichiro Inoue and Assistant Professor Mizuki Yamamoto of the Research Center for Asian Infectious Diseases of the Institute of Medical Science, the University of Tokyo, have identified Nafamostat as a strong candidate to fight COVID-19.

Even after the World Health Organization’s declaration of a pandemic, no drug has yet been shown to be effective for treating COVID-19 caused by the new coronavirus (SARS-CoV-2). The development of effective drugs is an urgent issue.

The genomic RNA of coronaviruses such as SARS-CoV-2 is surrounded by an envelope composed of a lipid bilayer and envelope proteins. SARS-CoV-2 initiates human cell entry after the Spike protein (S protein) present on the envelope binds to a cell membrane receptor ACE2 (*2). The S protein is cleaved into S1 and S2 by a human cell-derived protease (proteolytic enzyme) that is assumed to be Furin. S1 then binds to its receptor, ACE2. The other fragment, S2, is cleaved by TMPRSS2 (*3), a human cell surface serine protease, resulting in membrane fusion. According to Hoffmann et al., ACE2 and TMPRSS2 are essential in airway cells for SARS-CoV-2 infection (Reference 1).

The research group already reported in 2016 that Nafamostat effectively inhibits MERS-CoV S protein-initiated membrane fusion. The researchers did this using the Dual Split Protein (DSP) reporter fusion assay (*4) to screen a library consisting of 1,017 FDA-approved drugs. This screening result, together with experimental data from MERS-CoV infection of cultured airway epithelial cell-derived Calu-3 cells (*5), led them to propose that Nafamostat could be effective at inhibiting MERS-CoV infection (Reference 2).

In the present study, they newly established a SARS-CoV-2 S protein-initiated fusion assay and found that in the concentration range from 10 to 1000 nM, Nafamostat suppressed SARS-CoV-2 S protein-initiated fusion utilizing 293FT cells (derived from human fetal kidney) (*6) ectopically expressing ACE2 and TMPRSS2. Then, a similar experiment was performed using Calu-3 cells, which are considered an appropriate model for the cells SARS-CoV infects in humans. Low concentrations in the 1-10 nM range of Nafamostat significantly suppressed membrane fusion. This is almost the same as the concentration range for inhibition of membrane fusion by the MERS-CoV S protein.

The research group also compared the effects of Nafamostat and Camostat. They found that Nafamostat inhibited SARS-CoV-2 S protein-initiated fusion at a concentration less than one-tenth that needed for Camostat. Based on the above explanation, they concluded that Nafamostat is the most effective drug against SARS-CoV-2 S protein-initiated fusion among the protease inhibitors used in clinical practice and tested so far.

Future potential of Nafamostat and Camostat

Nafamostat is administered clinically by intravenous infusion. The research group speculated that the blood concentration of Nafamostat after administration would exceed the concentration needed experimentally to inhibit membrane fusion via the SARS-CoV-2 S protein. Therefore, it is expected that Nafamostat will prevent SARS-CoV-2 from entering human cells. Camostat is an oral drug. Blood levels after oral administration may be inferior to Nafamostat.

“Both drugs could be used alone, or in combination with other antiviral drugs that target separate processes needed for virus production, such as RNA replication or viral protein processing,” said Inoue.

Research Notes
(*1) drug repurposing: An attempt to find new effective uses for existing drugs whose safety in humans has already been adequately established in clinical practice.

(*2) ACE2: Angiotensin converting enzyme 2, which catalyzes the conversion of angiotensin II to angiotensin 1-7. ACE2 acts as a receptor for both SARS-CoV and SARS-CoV-2.

(*4) fusion assay system: A DSP (Dual Split Protein) reporter is used to detect fusion. DSP is a chimeric protein of split Renilla luciferase and split GFP (DSP1-7, DSP8-11), which has neither activity by itself, but can regain both GFP and luciferase activity upon self-association via its split GFP domain to a partner protein. By expressing these two proteins in separate cells, fusion between the cells can be quantified based on restored GFP and luciferase activity.

(*5) Calu-3 cells: Human bronchial epithelial cell-derived immortalized cells established from human lung cancer. It is used for functional analysis of respiratory cells. These cells are our appropriate model for the lung epithelial cells that SARS-CoV2 and MERS-CoV actually infect.