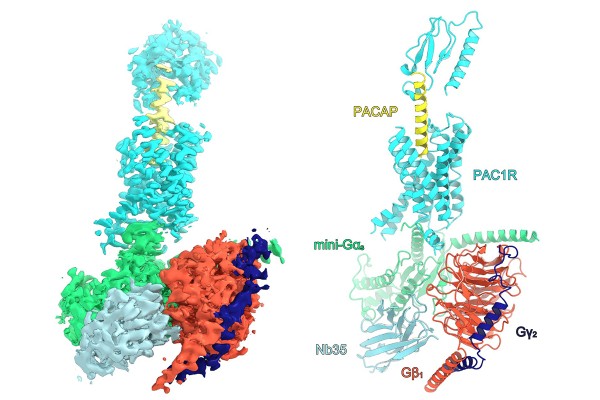 Overall structure of the human PAC1R in complex with PACAP and mini-Gsβ1γ2, the G-protein molecule that sends signals from PAC1R to other areas inside the cell. © Kazuhiro Kobayashi et al., 2020 CC BY 4.0

Researchers have captured an atomic-level high-definition image of a protein and the small molecule that binds to it. Both have been implicated in conditions including dry eye and post- traumatic stress disorder (PTSD). Full understanding of their structures will hopefully lead to development of an effective drug to regulate the protein's function.

The research team wanted to understand PAC1R's structure specifically when it is bound to PACAP. Advanced microscopy allowed researchers to visualize the two bound together in a test tube rather than inside a cell.

Researchers used a Titan Krios cryo-electron microscope, which freezes small samples of proteins using liquid nitrogen and then takes pictures using electrons, which have much shorter wavelengths than light, meaning the images are much higher resolution. The technique of cryo-electron microscopy (cryo-EM) won the 2017 Nobel Prize in chemistry for its ability to show molecules in 3D with atomic-level resolution.

"After three years of trying to crystalize PAC1R unsuccessfully, we changed strategies and launched a new sample preparation system and developed our cryo-EM method," explained Professor Osamu Nureki, leader of the research project and last author on the paper published in Nature Structural & Molecular Biology. Nureki's group in the Department of Biological Sciences are experts at finding ways to photograph proteins, including previously capturing the CRISPR gene editing protein Cas9 as it cut DNA.

Nureki's research group believes it is the first team in Japan to use cryo-EM to determine the structure of a G protein-coupled receptor and G protein, the type of proteins that includes PAC1R and PACAP. A G protein is a subunit that can be released from host proteins like PAC1R to send signals to other portions of the cell.

Researchers determined the structure of the PAC1R-PACAP signaling complex at 3.9 angstrom resolution. One angstrom is equivalent to 0.1 nanometer, or one hundred-millionth of a centimeter.

"Our functional analysis showed that the extracellular portion of PAC1R is merely an affinity trap to ensure high levels of binding and is not required for activation of PAC1R normal receptor function," said Nureki.

Researchers hope that their results will lead to the development of an artificial replacement of PACAP to manipulate PAC1R activity for better health.

"By solving the PAC1R structure when bound to PACAP, we make possible the future structure- guided design of an artificial small molecular compound to bind PAC1R for clinical use to treat PAC1R-associated diseases," said Nureki.

Collaborators at Tohoku University also contributed to this research.