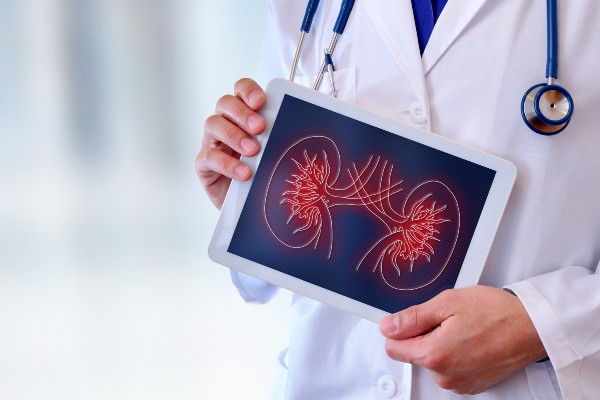 Researchers have discovered how cancer of the kidneys, or renal cancer, causes inflammation throughout the whole body. Stopping this inflammation might lead to effective treatments for patients whose renal cancer has spread, or metastasized.

The American Cancer Society estimates that renal cancer will kill 9,860 men and 4,970 women in 2020. In Japan, renal cancer affected 32 men and 14.4 women per 100,000 people in 2016. There are multiple subtypes of renal cancer, but the most common type is called clear cell renal cell carcinoma.

Medical experts know that inflammation throughout the whole body is frequently seen in patients with advanced-stage renal cancer. Inflammation is such a major part of the disease that doctors can sometimes predict how severe a patient’s illness will become based on an increase of white blood cells in laboratory examinations as well as clinical symptoms, including persistent fever.

Using experiments in mice and human renal cancer cells, researchers identified the genetic changes that cause the inflammation associated with renal cancer. The research effort was led by Project Researcher Jun Nishida, Associate Professor Shogo Ehata, and Professor Kohei Miyazono from the Graduate School of Medicine at the University of Tokyo.

To perform their experiments, researchers transplanted cells of human renal cancers into mouse kidneys. Those transplants caused disease in mice that mirrored the progression of renal cancer in humans: Cancer started in the kidneys and metastasized to the lungs.

Genetic analysis of the cancer cells revealed that genes related to inflammation were altered to increase activity levels. Specifically, in renal cancer cells, the DNA of certain inflammation genes had been activated through a process called DNA demethylation. Demethylation is part of the cell’s epigenetic regulation toolbox to regulate the activity of genes without directly altering the DNA sequence.

Researchers also tested a drug called JQ1, which is an effective treatment for leukemia (blood cancer) in animal experiments. JQ1 and drugs like it are known as bromodomain and extra-terminal motif inhibitors (BETi). JQ1 works by blocking the activity of other molecules that abnormally increase the expression of certain genes.

Treating renal cancer cells cultured in a dish with JQ1 did decrease the expression of inflammation-related genes, as well as the activity of neutrophils (white blood cells). In mice, JQ1 also decreased renal cancer cells metastasizing to the lungs.

Researchers state that they were surprised to see the drug suppressing the activity of so many inflammation-related molecules simultaneously within the cancer cells.

Researchers say that JQ1 and other BETi drugs could still prove useful for renal cancer treatment. Perhaps these drugs need more time to work or could be effectively combined with other immune-based cancer treatments.

The UTokyo research team hopes its research gives patients with renal cancer more treatment choices than ever before.

This research is a peer-reviewed experimental study using male mice and human cells.