Heavy metals and microbial genes hidden in coral skeletons can reveal the connection between human activity and coral reefs and changes in coral reef ecosystems over past decades.

The samples of coral skeletons used in the research came from Fongafale Island in Tuvalu, an island nation in the Pacific Ocean midway between Hawaii and Australia built on coral reefs. The highest elevation in Tuvalu is about 5 meters (15 feet) above sea level. The nation is threatened by sea level rise caused by global climate change.

Although global satellite data can track widespread environmental changes, understanding long-term changes at specific locations is difficult due to incomplete or nonexistent historical records. The timing and process of ecosystem deterioration around Tuvalu is unknown because of the shortage of water quality data from before 2009.

Certain species of coral have annual growth cycles that leave patterns in their skeletons, similar to growth rings in tree trunks. Researchers examined two coral samples collected from shallow water, one from a healthy area about 18 kilometers (11 miles) off the coast of Fongafale Island and one sample from a polluted area near the shore.

Researchers can determine the age of each annual growth layer and even specify the season when the coral grew by using radiocarbon and stable isotopic oxygen dating techniques. The coral samples from Fongafale Island had annual growth bands from 1940 until about 1972, and then appeared to stop growing. The coral started growing again in 1991 until 2009, when the samples were collected. Most notably, the coral had concentrated bands of black color within their growth layers starting in 1991.

“When we found the annual black bands in Tuvalu coral, we were so shocked. We couldn’t believe that the black bands in coral reflect local environmental conditions,” said Nobuko Nakamura, first author on the research paper published in Scientific Reports.

Chemical analysis revealed that the black bands included heavy metals, mostly iron, and organic material. DNA analysis of some of the black bands identified the remains of bacteria that thrive in low-oxygen conditions and use sulfur for energy. 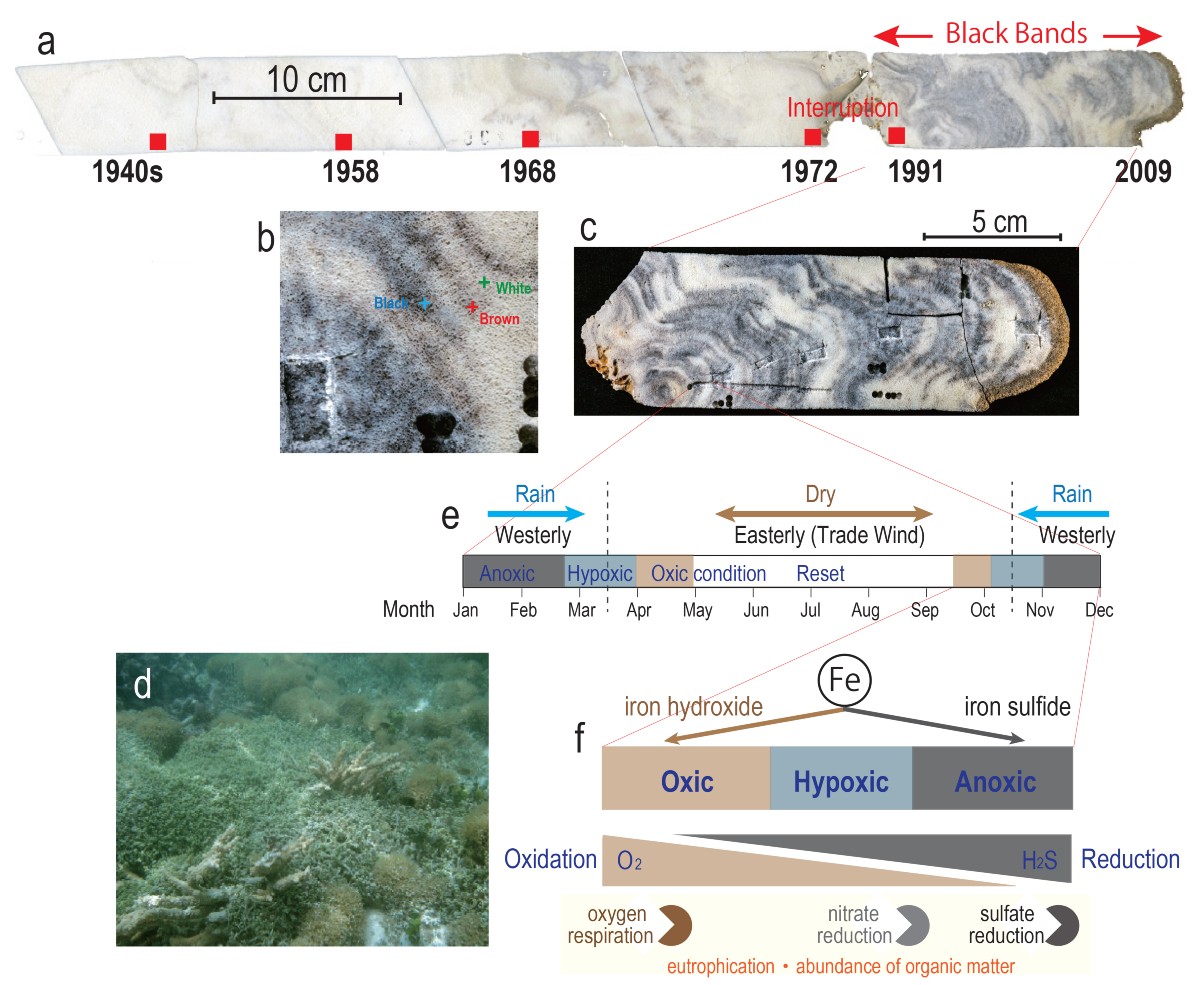 (a) A massive Porites coral core from Fongafale Island. After not growing from 1972-1991, the coral started growing again and was contaminated with yearly black bands. (b, c) Enlargement of black bands. Photos by Nobuko Nakamura. (d) Dead branching corals in the Fongafale lagoon. Photo by Hajime Kayanne. (e) Researchers can estimate the season when the black bands grew based on the stable isotopic oxygen within coral growth layers. Black bands correspond to the November-March rainy season, which brings westerly winds that lead to lower oxygen levels. (f) Schematic of the variations in color caused by iron interacting with different levels of oxygen and sulfur.

The research team determined that the variations in the colored bands were created by other elements interacting with iron. Iron is black in conditions without oxygen, but rusts, or oxidizes, to become reddish when oxygen levels rise. Bacteria that use sulfur to grow without oxygen leave behind their DNA in the coral skeleton, as well as crystals of pyrite, a mineral formed by combining iron and sulfide.

Researchers state that the black bands record the human impact on Tuvalu’s coral reef ecosystem since the 1990s. Domestic waste running into the oceans increases the amount of nutrients in the water, which then leads to out-of-control growth of algae. Sudden blooms of algae decrease the oxygen levels in the water.

"Healthy coral ecosystems play a pivotal role in island resilience against sea level rise. The ecosystem shift from coral to algal overgrowth due to pollution greatly reduces the potential of island formation. The restoration of healthy coral reef ecosystems is strongly recommended for increasing island resilience against sea level rise," said Professor Hajime Kayanne from the UTokyo Graduate School of Science, a co-author of the research publication.

Collaborators at the Sasakawa Peace Foundation and Dentsu Inc. in Tokyo, and the National Institute for Environmental Studies in Tsukuba contributed to this research.