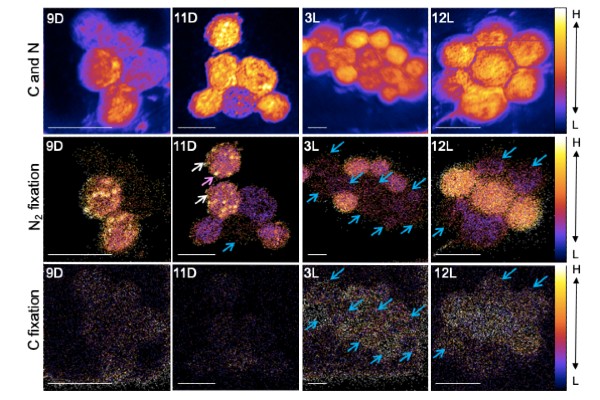 Nanoscale secondary ion mass spectrometry image showing changes in nitrogen fixation and photosynthesis by diazotrophs over time. The type of diazotroph pictured, Crocosphaera watsonii, fix nitrogen in the dark (1-12D) and perform photosynthesis to fix carbon in the light (1-12L). Cells actively fixing nitrogen (white arrows) and less active cells (blue arrows) were observed after 11 hours in the dark (11D). Nitrogen storages (pink arrows) were observed in cells actively fixing nitrogen. Active photosynthesis was observed not only from nitrogen fixing-cells but also from cells which did not fix nitrogen cells during the light phase (3L and 12L). © Takako Masuda, The Czech Academy of Sciences

Throughout the world’s oceans, single-celled organisms likely cooperate through division of labor for a life-sustaining process of metabolism. This division of labor becomes more common under conditions of scarcity and likely helps the population survive difficult conditions.

Life on Earth is built using carbon and nitrogen, elements abundant in the atmosphere. However, not all organisms can take those elements out of the environment as gases and turn them into forms that cells can use as sugar or proteins. Researchers refer to the process of transforming an element from a gas into a biologically useful form as fixation.

Plants and some other organisms fix carbon through photosynthesis. The oxygen present during photosynthesis irreversibly destroys the enzymes needed to fix nitrogen. Thus, cells fix nitrogen through processes that evolved to remain separate from photosynthesis, either physically or by being performed at different times.

Diazotrophs are one type of organism that are vital in ecosystems worldwide as a primary source of fixed nitrogen for the organisms that consume them.

“Initially, I was intrigued by the fact that organisms of microscopic size govern the global flows of carbon and nitrogen, and I continue to be surprised by these organisms’ unexpected metabolic strategy,” said Takako Masuda, Ph.D., who was a doctoral student at the University of Tokyo Graduate School of Agricultural and Life Sciences at the time of the research and continued the research at the Czech Academy of Sciences.

During the experiment, carbon or nitrogen available to the cells was labeled with stable isotopes. These labels allowed researchers to distinguish freshly incorporated carbon and nitrogen from intercellular carbon and nitrogen. Researchers then examined up to 220 cells using a chemical analysis technique called nanoscale secondary ion mass spectrometry, which enables researchers to visualize the allocation of elements of interest.

The results revealed that some cells stopped nitrogen fixation, but they remained alive; carbon fixation was active.

Researchers also developed computer simulations of hypothetical populations of diazotrophs under different environmental conditions to understand why populations contain cells with such different metabolic activity. Cells that fix both nitrogen and carbon can produce more nitrogen than they need, which they then might transfer to cells that only fix carbon. If some cells avoid the extra energy costs of needing to fix their own nitrogen, the entire population can survive with lower energy costs. Researchers do not yet know for certain how individual diazotrophs physically transfer their excess nitrogen to other cells in their population.

The computer simulations also estimated that the benefits of not all cells fixing their own nitrogen were greatest when the diazotroph population grew slowly.

Researchers estimate that populations of diazotrophs with division of nitrogen fixation labor may be able to survive approximately 25 meters deeper than populations where all cells must fix their own nitrogen. The possibility of an extended habitat would benefit the diazotrophs.

“Accurate estimation of global carbon and nitrogen flux is important to understand the present environment and predict the future environment,” said Masuda.

Collaborators at the University of Washington, U.S.A., and the Czech Academy of Sciences, Czech Republic, contributed to this research.