Scientists working to map the inner cores of atoms confirmed unexpected stabilization in very heavy isotopes of the metals titanium, scandium and vanadium.

The tiny electrons spinning around the outer edges of atoms have been extensively modeled. However, the organization of the much larger protons and neutrons at atoms’ centers is less understood. These new results allow physicists to understand more about the structure of neutrons and protons within nuclei.

“The atomic nucleus is the essence of the materials constructing our world and the features of nuclei affect the evolution of the universe. I would like to know why our material world exists as such,” said Assistant Professor Shin’ichiro Michimasa, first author of the research paper recently published in Physical Review Letters. Michimasa helped lead the project at the University of Tokyo while working with collaborators at other universities in Japan and the U.S.

Researchers measured the heavy isotopes of titanium (Ti), scandium (Sc) and vanadium (V). The heaviness, or extra mass, of the isotopes comes from these atoms having more neutrons than the average atom found in nature. For example, 48Ti is the most abundant natural form of titanium, but researchers worked with titanium isotopes 60Ti, 61Ti, and 62Ti which possess 12, 13 and 14 additional neutrons, respectively.

In addition to the titanium isotopes that contain approximately 40 neutrons and 22 protons, researchers also determined the atomic masses of 58-60Sc and 62-64V, which have similar proton and neutron numbers to 62Ti. After producing the heavy isotopes, researchers determined their mass by reconstructing the flight trajectories of each atom as they traveled through BigRIPS and other linked machines at the facility.

“Our technique to measure the atomic masses is very simple. We observe the atom traveling along a magnetic beam line and measure its speed, direction and electrical charge. Our systems are designed to measure these values very precisely using sophisticated detectors,” said Michimasa.

Researchers calculated the two-neutron separation energies from the measured atomic masses. The two-neutron separation energy is the energy required to separate two neutrons from the atoms and indicates how strongly the neutrons bind inside the nuclei. These indicative values in heavy isotopes are essential to know how many atomic nuclei exist and to map the boundary of existence for nuclei.

“The emergence of stability in 62Ti is out of theoretical predictions, and the microscopic mechanism of the stability is not understood yet. This stability will be a new question in nuclear physics,” said Michimasa. 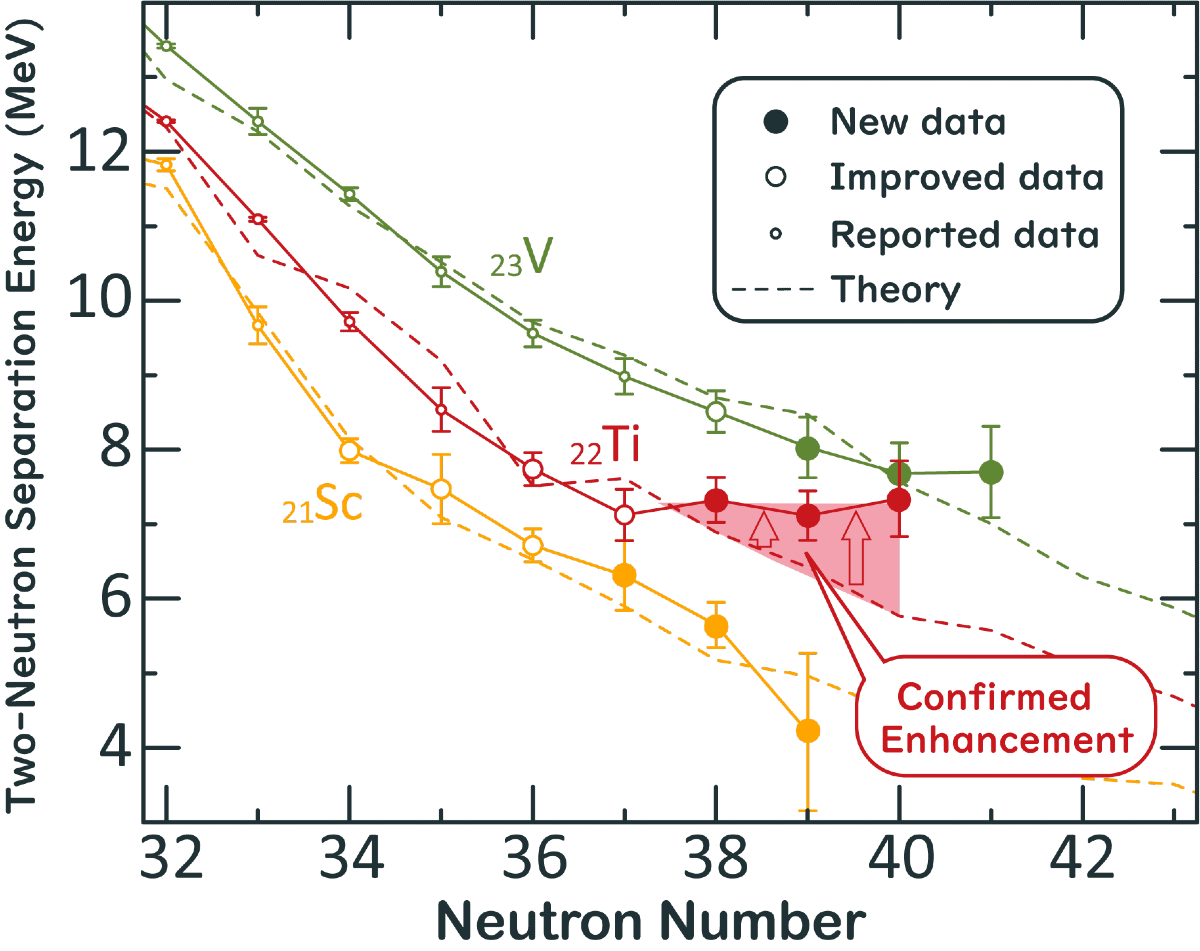 Two-neutron separation energy of neutron-rich scandium, titanium and vanadium isotopes around the neutron number 40. Two-neutron separation energy (S2n) is an essential indicator to display the binding strength of neutrons in nuclei. In general, S2n decreases as the number of neutrons in nuclei increases and S2n becomes zero at the boundary of existence of the isotopes. Solid lines in the graph show experimental data and dotted lines are state-of-the-art theoretical calculations. Recent research revealed unexpected nuclear stabilization in titanium isotopes around the neutron number 40. © 2020 Shin’ichiro Michimasa, all rights reserved