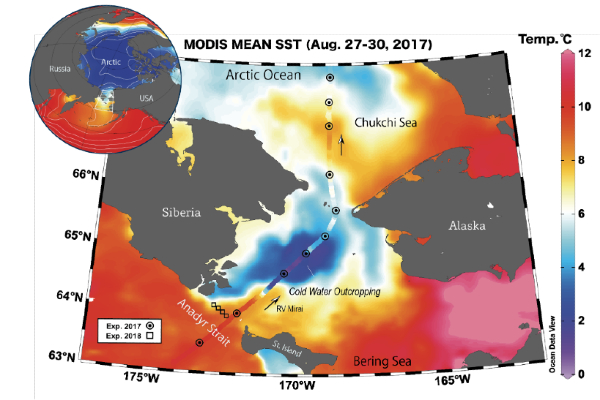 Cold water upwells near the Siberian continent, and spreads to the Chukchi Sea and downstream regions. Cold water at the sea surface greatly impacts the heat balance in the Pacific side of the Arctic Ocean. Black bull’s eye circles mark the locations where sea surface temperature was directly measured by the research vessel Mirai in the 2017 survey. © Yusuke Kawaguchi, originally published in Journal of Geophysical Research: Oceans

Researchers in Japan have studied a cold ocean current that likely contributes to ice formation in the Arctic. This is the first time that researchers have made measurements directly in an area known as the Anadyr Strait, rather than relying on satellite data.

“It is well known that sea ice in the Arctic diminishes more rapidly than expected by a variety of numerical simulations. The uncertainty is fundamentally attributed to the absolute lack of direct surveys at waters near the Arctic. Our new finding is very important because it allows us to predict spatial variation of sea ice more accurately by improving calculations of heat budgets and oceanic circulation,” said Research Associate Yusuke Kawaguchi from the University of Tokyo, first author of the research published in the Journal of Geophysical Research: Oceans.

North of the Pacific Ocean, water from the Bering Sea slips around either side of St. Lawrence Island, then on through the Bering Strait between Russia and Alaska, flowing northward into the Arctic Ocean. Water taking the western route around St. Lawrence Island moves through the Anadyr Strait, a channel formed between the Russian east coast and the island, propelled by the Siberian Coastal Current.

Previously, the eastern route around St. Lawrence Island has been more extensively studied and experts have thought that warm water current was the main contributor to variations in sea ice in the Pacific side of the Arctic Ocean.

“For a long time, we wanted to know if there are any other factors which could impact heat balance for the Arctic Ocean,” said Kawaguchi.

Researchers traveled on the Japanese research ship Mirai for three days in August of 2017, cruising with the Siberian Coastal Current for over 550 kilometers (342 miles) from the Bering Sea through to the Chukchi Sea while recording the temperature, salinity, current, turbulent kinetic energy and velocity of the water along the way. One year later, they returned on the Russian research ship Professor Multanovskiy and traveled about 58 kilometers (36 miles) across the current between the Russian coast and St. Lawrence Island. Researchers then recorded similar types of data along the Russian coastal area while anchored for 12 hours at a time to observe differences with the tide.

“We found, for the first time, cold water upwelling right at the narrow channel of Anadyr Strait, near the entrance of the Arctic Ocean,” said Kawaguchi.

The cold water originates from the Gulf of Anadyr, a shallow gulf in the northwestern Bering Sea that normally freezes for 10 months a year. As the fast Siberian Coastal Current creates turbulence with the seafloor, cold water that would typically remain below the more buoyant warm surface water is pushed upwards.

“Diminishing sea ice in the Arctic could affect the global climate, especially in the Northern Hemisphere. Our data would make climate models more accurate in the future,” said Kawaguchi.

Collaborators at the Institute of Low Temperature Science at Hokkaido University, and the Institute of Arctic Climate and Environmental Research at the Japan Agency for Marine-Earth Science and Technology also contributed to this research.