Mapping connections between liver, muscle and metabolism in obesity Mouse study finds obesity disrupts metabolism both within and between organs 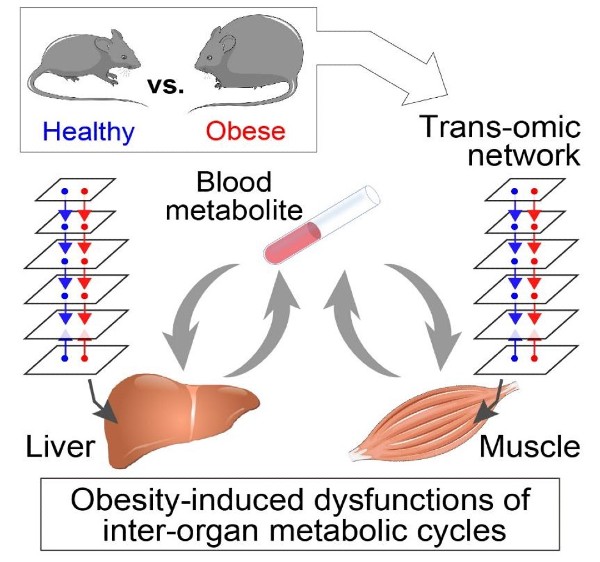 Researchers have identified changes in the metabolism of liver and skeletal muscle cells in live mice that are likely connected to obesity-associated metabolic disorders. This study was led by Professor Shinya Kuroda, head of the Systems Biology Lab at the University of Tokyo and an expert in trans-omics research, which combines the different "omics" scientific specialties — transcriptomics (gene activity), proteomics (proteins), and metabolomics (metabolites) — to map the molecular interactions inside cells in a highly detailed way.

“We are interested in elucidating the whole picture of how obesity disrupts healthy control of metabolic processes in our body through an unbiased and comprehensive analysis of metabolic molecules,” said Kuroda.

Metabolism is regulated both within individual organs and by interactions between organs through the blood. According to current scientific understanding, obesity is linked to Type 2 diabetes because obesity disrupts the healthy metabolic cycle between organs.

“The inter-organ metabolic cycles are large and complex. To reveal the dysfunction of regulatory mechanisms associated with obesity, we constructed large-scale regulatory networks of the differences in liver and muscle metabolism between healthy and obese mice,” Kuroda explained.

Researchers collected blood, muscle and liver samples from adult (10-week-old) mice that had fasted for 16 hours. Researchers tested both healthy (wild-type) mice and mice genetically predisposed to obesity. The samples were put through a range of different analyses to identify and quantify genetic material, proteins and substances produced by metabolism called metabolites.

“It was surprising to discover that enhanced glucose production in the liver and reduced glucose utilization in muscles may lead to high fasting blood sugar levels in obese mice [blood sugar measured after 16 hours of not eating]. It was also an impressive experience to clarify the potential mechanisms of those dysfunctions in each organ,” Kuroda commented.