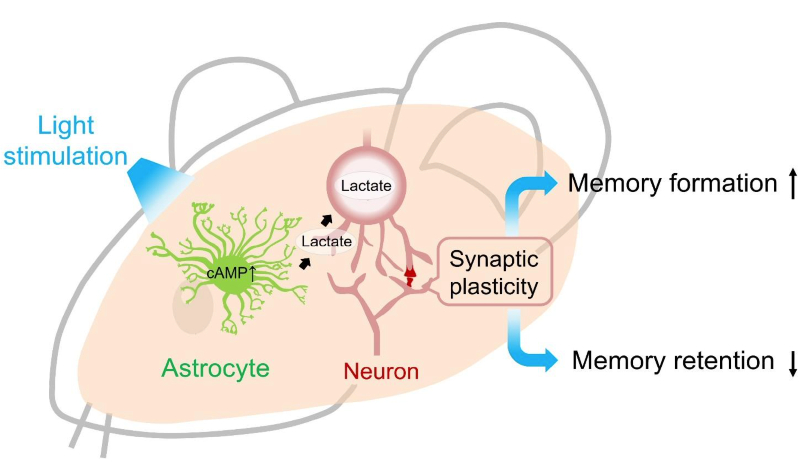 Researchers were able to enhance memory formation in mice by increasing a specific signal between astrocytes, one of the most numerous types of cell in the brain that occupy more space in the brain than nerve cells. Experts have long known that astrocytes affect memory, but the signal molecules responsible for controlling the process were not previously understood.

“Manipulation of astrocytes provides unlimited possibilities for improvement of brain functions and treatment of brain diseases,” said Zhiwen Zhou, a postdoctoral researcher at the University of Tokyo and first author of the research published in Proceedings of the National Academy of Sciences of the United States of America (PNAS).

The research team led by Associate Professor Ryuta Koyama and Professor Yuji Ikegaya first had to develop a new type of genetically modified mouse whose astrocytes could express a light-sensitive protein. By shining a blue light probe directly into the mice’s brains, researchers could activate that light-sensitive protein and cause the astrocytes to produce extra cyclic adenosine monophosphate (cAMP). cAMP is a signaling molecule used by many cells, including astrocytes.

Researchers used two types of memory tests with adult mice: one involved recognizing an object and the other required the mice to find a raised platform in a swimming maze. Mice received blue light to stimulate extra cAMP production by their astrocytes either before, during, or after their training sessions. Their performance on the same memory tests was then reassessed several days later.

Researchers began by shining blue light for one hour, but saw similar results when they reduced the light stimulation to just 10 minutes.

“It was a surprise that relatively short stimulation to astrocytes was sufficient to modulate memory,” Zhou remarked.

Additional cellular experiments allowed researchers to measure the activity and chemical signals between cells after blue light stimulated astrocytes to release additional cAMP. Results revealed increased signal transmission efficiency between neurons, specifically by increasing the astrocyte-neuron lactate shuttle, the cellular pathway for astrocytes to supply lactate to neurons so that the neurons have extra energy when they need it. This released lactate is taken up by nerve cells and leads to synaptic plasticity, the flexibility of connections between nerve cells important for learning and forming memories.

“We have shown that manipulating the non-neuronal cells has a strong impact on memory. We hope this finding can lead to more research on non-neuronal brain cells to understand basic brain functions and find treatments for brain diseases,” said Zhou.