The University of Tokyo held an award ceremony and symposium on March 17, 2021, for a competition to design a new public restroom near a university landmark.

The university announced the design competition, provisionally titled “Public Restroom Near the Akamon,” on November 13, 2020, calling for ideas from UTokyo students and researchers. The contest was an attempt to think about the university’s campus from the point of a small facility — a restroom that will be built near the iconic Akamon Gate. It asked applicants to come up with a design that represents an inclusive society and also something suitable for a future campus. Despite the challenging assignment, 63 design proposals were submitted. After two selection stages, eight judges selected the First Prize and three Award for Excellence winners.

At the award ceremony held online due to the ongoing coronavirus pandemic, University Professor Kengo Kuma, who served as the chief judge of the competition, congratulated the students, saying their high-quality design proposals exceeded the judges’ expectations. “This was such a unique idea. I’ve never heard of a student competition like this in the world — and with a restroom as its theme,” Kuma said. “The judges were a bit worried at first whether we would receive any proposals that struck the right balance among the elements, including design, function, inclusiveness and historical context. But the winning design beautifully presented the answers and addressed these issues.” 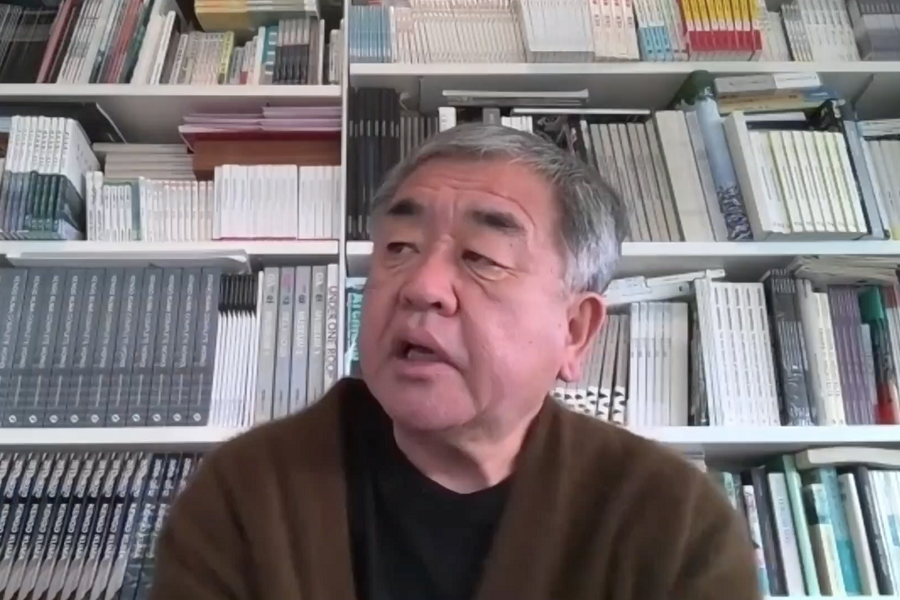 University Professor Kengo Kuma served as the chief judge of the competition. He said the design competition served as a great opportunity for him to gain many different perspectives.

The First Prize went to a group of three students from different departments: Nairu Kimura, a first-year master’s degree student from the Graduate School of Frontier Sciences; Kosuke Saito, a fourth-year undergraduate student from the Faculty of Law; and Ryo Kawamoto, a fourth-year undergraduate student from the Faculty of Medicine. Their proposal — which Kuma complimented as a well-thought-out design — combined three toilet compartments that vary in function and form. “We disassembled the conventional multipurpose restroom model first,” Kimura explained. “And thought over things like what kind of space would be easy to use for people with different needs, and what would be nice to have.” Kimura and his teammates will take part in creating the detailed design for the restroom, which the university aims to complete in the coming academic year beginning in April 2021.

At the symposium, which was held following the award ceremony, five judges exchanged their views on the design competition, the things restrooms represent, and the state of the university campus in the post-COVID-19 era. Professor Atsushi Deguchi of the Graduate School of Frontier Sciences and director of the Campus Planning Office, who also served as deputy chief judge of the competition, moderated the event.

“The themes the students came up with for their designs were quite distinctive. Many of the design proposals opened my eyes to new possibilities and ways to comprehend the campus,” said Professor Manabu Chiba of the Graduate School of Engineering.

Professor Koichi Kato, also of the Graduate School of Engineering, pointed out that many of the submitted ideas addressed ways to express the historical elements of the Hongo Campus. Kato said thinking about the campus could also heighten students’ sense of belonging to the campus.

Shinichiro Kumagaya, associate professor at the Research Center for Advanced Science and Technology and director of the Disability Services Office, spoke from the standpoint of a person who uses an electric wheelchair. He explained that a toilet is a special place for people with disabilities that affects all aspects of their daily lives. “When I’m eating, studying or doing research, having a restroom close by where I can feel safe — that sole fact makes me eat well and allows me to concentrate on my studies and my work. On the other hand, when I know there isn’t a restroom nearby where I can feel at ease, more than half my mind is occupied with thoughts of what I should do if I need to go to a bathroom, and my energy is spent on such endless worries,” Kumagaya explained. “At a time when the university is trying to create an inclusive campus, shining a spotlight on the toilet, which tends to be overlooked, and using our wisdom to step up to this challenge is a wonderful thing.”

Meanwhile, Kuma said the competition gave him clues for contemplating the post-coronavirus campus. “I feel there is a need to reconstruct the university once the pandemic is over,” Kuma noted. “When I think about the things that can’t be done online, I believe the actual physical spaces on campus play very important roles. This project has given me a great opportunity to think about the campus besides its architecture, such as what kind of communication would be created and how the university’s history would be felt.” 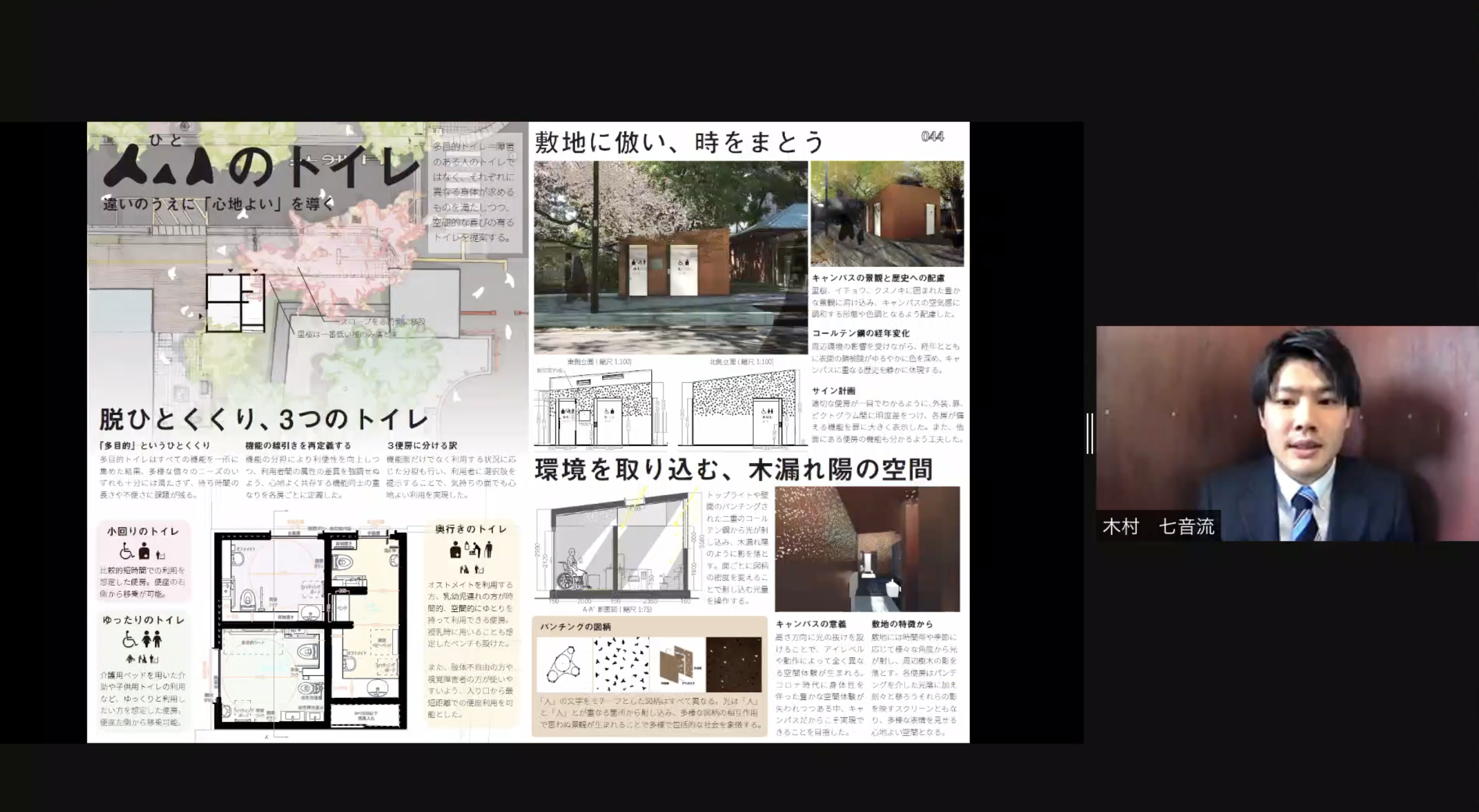 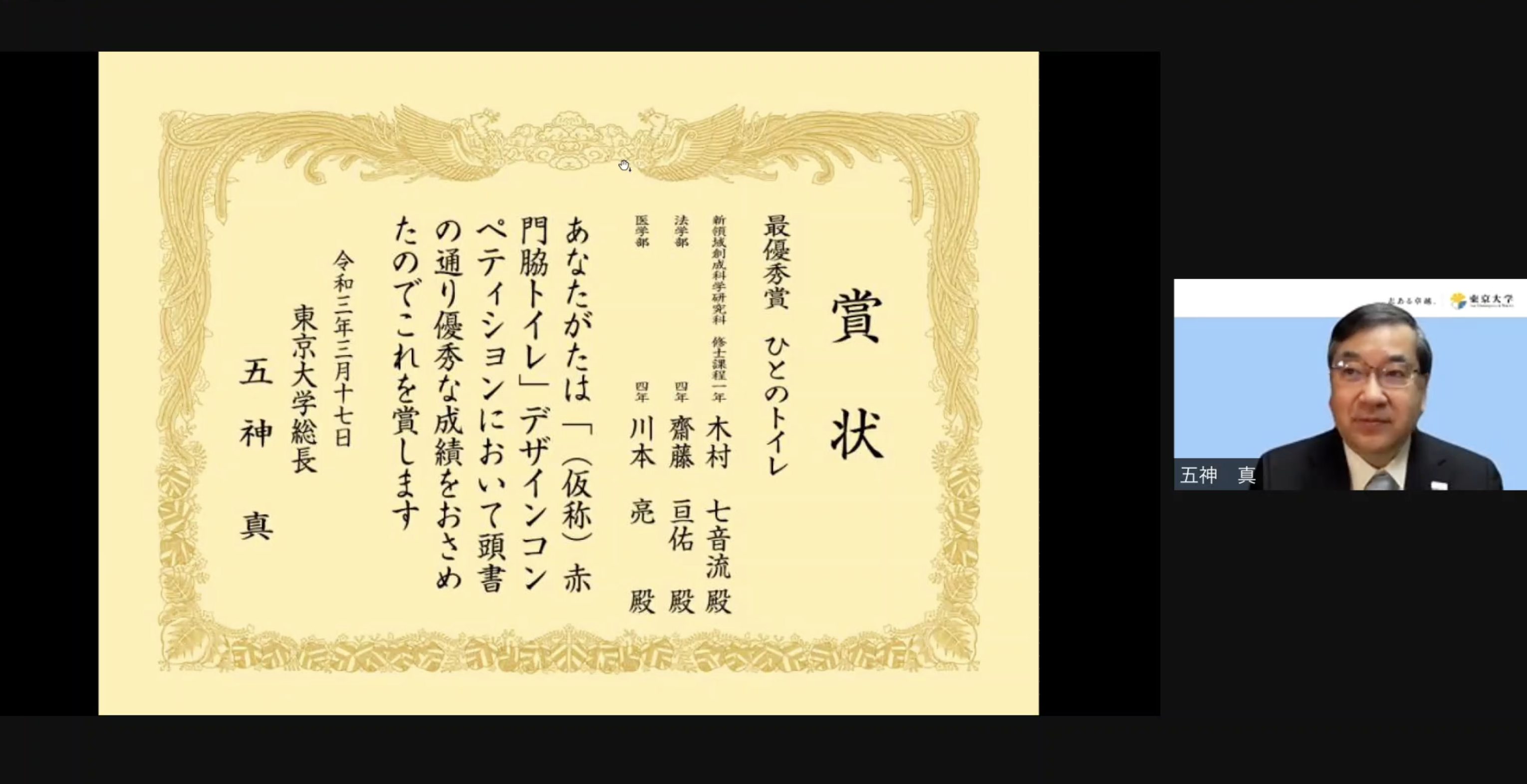 President Makoto Gonokami praised the four groups, which won the First Prize and the three Awards of Excellence. (The award certificates will be sent to the recipients later.) Explaining that the number of design proposals the university received exceeded its initial expectations, Gonokami said: “Once again, I realized the power of youth, which is the greatest asset of UTokyo.”