Iris are known for their flowers and chives might be common kitchen staples, but experts are interested in these plants for the unusual structure of their leaves. Researchers have uncovered some of the genetic controls that create flat leaves without distinct top and bottom faces.

For their recent experiments, the researchers used a species not commonly found in research labs called Juncus prismatocarpus, sometimes known as branching rush. The plant is usually 30 centimeters to 60 cm tall, grows in damp ground and is native to Japan, China, most of Southeast Asia, as well as Australia and New Zealand.

“This species is usually not familiar to many plant scientists, but it has some advantages, such as small stature and fast growth. Although we had to establish many experimental systems for this new material, we could reveal several new findings,” said Tsukaya.

To uncover the axis around which flat, unifacial leaves grow, researchers traced the location of a nearly universal plant growth hormone called auxin. In many well-studied plant species, gradients of high to low concentrations of auxin define the axis around which cells and tissues organize themselves into specialized structures early in development.

Instead of trying to visualize auxin hormone gradients directly, researchers used auxin-sensitive genes as indicators to track the detailed location of normal auxin activity in both plant species. Researchers then used drugs to disrupt normal auxin activity and observed how the leaves responded. They also looked for changes in the DROOPING LEAF gene they had identified in previous research.

“Our discoveries on a novel system for the flattening growth of unifacial leaves might be applied for artificial design of flower forms,” said Tsukaya. 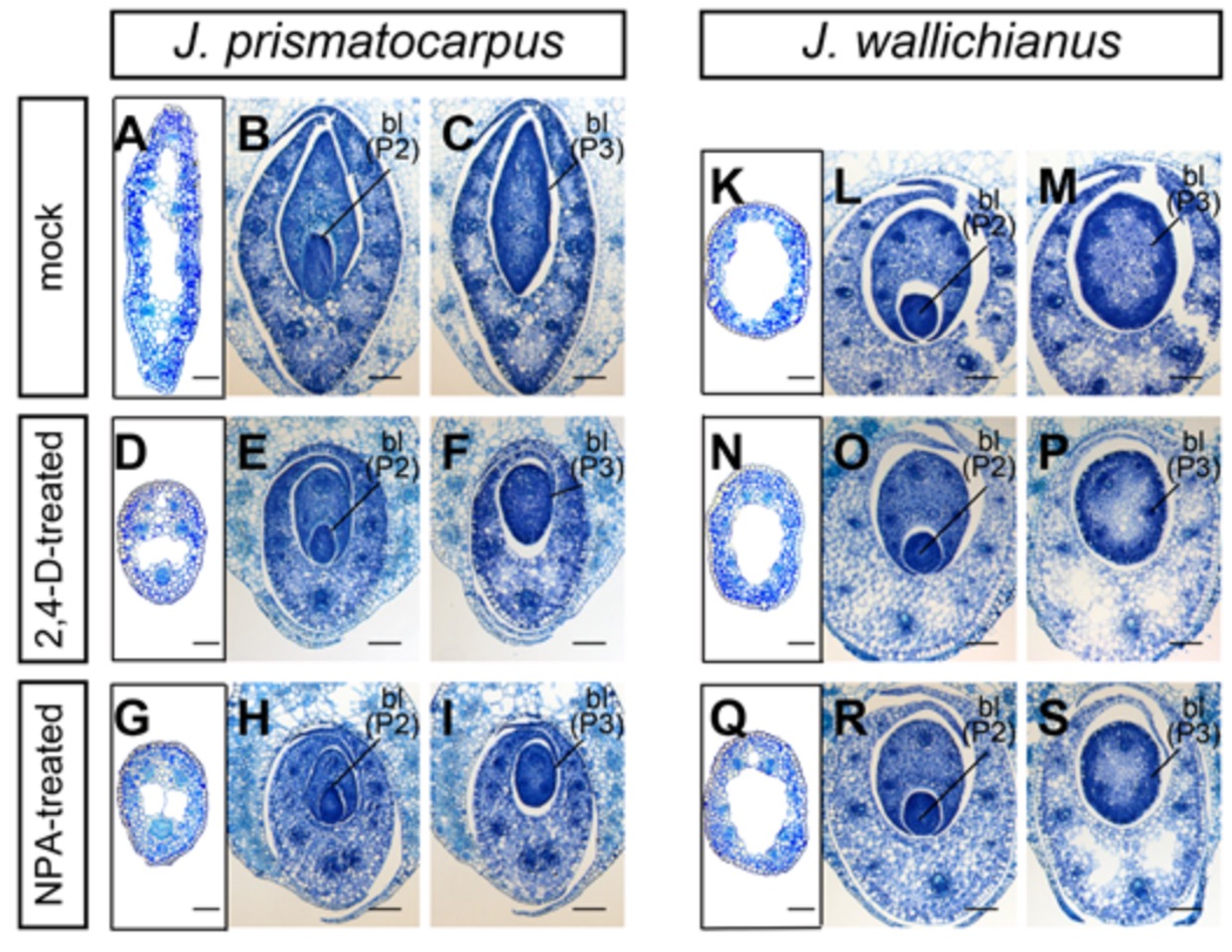 Normal leaf shape in the top row (mock treatment) of the flat unifacial leaves of J. prismatocarpus (left) and the cylindrical unifacial leaves of its evolutionary cousin, J. wallichianus (right). Leaves are seen at both immature (P2, B and L center columns) and mature (P3, C and M right columns) stages of development. Drugs that inhibit the plant hormone auxin (2,4-D middle rows and NPA bottom rows) cause J. prismatocarpus leaves to have a round shape (D through I), but do not affect J. wallichianus (N through S). © Photo by Akira Nukazuka, first published in Plant Physiology, DOI: 10.1093/plphys/kiab087