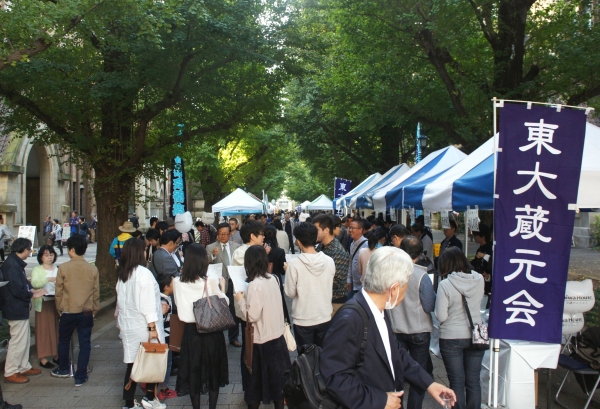 The University of Tokyo welcomed back the alumni community for its annual Homecoming Day on October 20th, 2018. The Hongo and Yayoi campuses were filled with alumni retracing the steps of their student days with friends and family as well as the locals.

Events and activities were held throughout the day, including special talks and lectures, musical performances and entertainment, a stockholder’s meeting, and various other workshops. Food and beverage stalls were set up along the avenue of ginkgo trees, adding a festive atmosphere to the event.

This year was a particular success, with an estimated turnout of over 5,000 people. Blessed with good weather, there was a bustling energy all over the campuses with the sounds of conversations and music.

The health check section was the most popular, where alumni compared their current health to when they were in the first year of university (limited to those who enrolled between 1961 and 2015). Naturally, some mixed reactions were seen on site.

Another major attraction was the Kaitokukan – Homecoming Day is the only day in the year that this guesthouse and garden, which is listed as one of the national scenic spots (名勝) as of 2015, is open to the public. Tea ceremonies, held throughout the day, were fully booked by 10am.

Held every year on the third week of October, Homecoming Day has been running since 2002 with the amalgamation of the university alumni communities, and has since become a household event.