Tweet
What is the structure of reality? What is knowledge, and by extension, scientific knowledge?

Noted German philosopher Dr. Markus Gabriel discussed these topics in the talk “Science and Metaphysics.” This is a joint seminar put on by the Kavli Institute for the Physics and Mathematics of the Universe (Kavli IPMU) and the International Research Center for Neurointelligence (IRCN). Kavli IPMU is a cross-disciplinary research center for addressing the origin and evolution of the Universe, and IRCN is tackling the ultimate question – “How does human intelligence arise?” Both of them are basic science institutions seeking new possibilities in other basic disciplines such as philosophy. This talk, in which a scientific institution invited a philosopher to speak, was quite a unique endeavor. 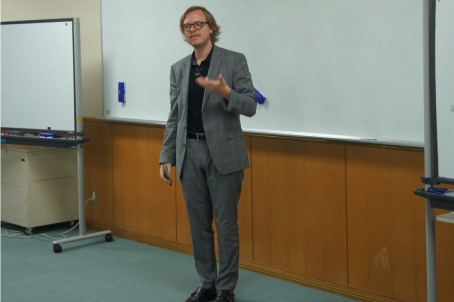 Reality, Dr. Gabriel argued, is not “one”—in other words, it is not a unified concept. Since the 3,000-year history of western philosophy has been predicated on the existence of a unified reality, some may equate reality with the universe. Dr. Gabriel cautioned against doing so, however, saying that would rule out, for instance, the multiverse hypothesis.

Segueing into a discussion about truth and falsifiability with regards to science, he rejected the notion held by famous philosopher Karl Popper that one cannot really attain truth through science. He claimed that science is not only science to the extent to which it is falsifiable; science can know the truth. Thus, Dr. Gabriel concluded, a different approach is required: an emphasis on both sides of the reality of empirical knowledge acquisition: optimization and falsification. To wrap up, he extended this discussion to philosophical knowledge.

After Dr. Gabriel’s talk, a panel discussion took place with Executive Director Yokoyama and Professor Nomura offering comments on the nature of truth and knowledge. Dr. Yokoyama touched upon the challenges of veracity and falsifiability in neuroscience, while Dr. Nomura examined how we determine whether certain things exist. The three professors then took questions from the audience on topics such as theories of truth, chaos and order, different interpretations of the term “knowledge,” empiricism, and how probability thresholds affect belief.

About 60 people sat in the audience, with attendees ranging from UTokyo students and researchers to individuals from outside the University. One attendee, a Master’s degree student at UTokyo’s Graduate School of Arts and Sciences, called the seminar “stimulating,” adding that he appreciated the opportunity to hear a world-famous philosopher discuss topics relevant to both science and philosophy.

Dr. Gabriel also offered his thoughts on the seminar, saying: “I thoroughly enjoyed this actual, content-full exchange between philosophy, physics and neuroscience today, and I thought it was very successful in that we actually talked about shared topics. We actually did something together, and it was remarkable.”

Inquiries about the content of this page: Kavli Institute for the Physics and Mathematics of the Universe