Tweet
The 3rd JIEPP Symposium was held online on Friday, March 5, 2021 from 13:30. The purpose of this symposium was to further evolve the discussions on Japan-India exchange and industry-university collaboration by utilizing the lessons learned from the first and second symposiums. By sharing the diverse and cutting-edge good practices in the industry-academia collaborations, the participants were able to exchange opinions on the role that the platform required to expand and deepen the industry-academia collaboration based on Japan-India exchange on a global scale.

​     The online symposium was viewed by 115 people, who were mainly from universities and companies. Professor Satoshi Watanabe of the Graduate School of Engineering served as the general moderator.

​     In the keynote speech titled “The University of Tokyo Future Society Initiatives” by Professor Teruo Fujii, Executive Vice President of the University of Tokyo, he introduced the UTokyo Future Society Innovation (UTokyo FSI), which was established in July 2017 at the University of Tokyo with the aim of contributing to the creation of a better future society toward the realization of Society 5.0, the OMNI initiative that is being implemented as one of the related projects, as well as examples of industry-university co-creation, in which the future vision is shared with companies and examined together from the stage of questions to be solved.

​     As an important example of industry-academia co-creation, the "UTokyo Gateways" project was introduced, in which the university bridges the gap between domestic industry and top overseas centers for semiconductor and quantum technology strategies. In addition, as an example of industry-academia co-creation, the collaboration with Tata Consultancy Services, which aims to solve social issues through the use of digital technology, was discussed in detail.

​     In the panel discussion which followed, Professor Masahide Horita of the Graduate School of Frontier Sciences of UTokyo acted as moderator, and was joined by Ms. Norie Kobayashi, Coordinator of the IITM-NUT Office at Nagaoka University of Technology, Professor Hiroyuki Koyama, Associate Director of Organization for Promotion of Glocalization and Head of Glocalization Promotion Division at Gifu University, and Mr. Tetsuya Nakamura, Chief Digital Innovation Officer & Vice President of Tata Consultancy Services Japan, as panelists.
The panelists first introduced case studies of their own organizations' initiatives, followed by a discussion.

​     Prof. Koyama introduced the joint degree program between Gifu University and the Indian Institute of Technology Guwahati (IITG), which is based on the close relationship between the universities of Japan and India and the collaboration with the local economy.

​     Mr. Otani introduced the project to accept foreign students from Kerala, which started because Dr. Hajime Nakamura (Professor Emeritus of the University of Tokyo, Indian philosophy) is from Matsue City. He explained that this project was implemented jointly by several cities with geographical ties across the border of the prefecture, in cooperation with local companies and Shimane University.

​     Mr. Nakamura gave an introduction about TCS, to which he belongs, and the strategic collaboration between TCS and UTokyo. He then explained that India is the best partner to lead Japan to growth, and that it is necessary for Japan to "engage" with India based on accurate knowledge about India.

​     In the discussion that followed, Professor Horita raised the question of how to build a framework that would enable collaboration among the various Japan-India exchange initiatives. Mr. Koyama then asked how and in what direction the various initiatives could be connected. In response, Mr. Nakamura pointed out the importance of concentrating on specific areas to effectively deepen exchanges and the importance of speed. Ms. Kobayashi also explained the difference in the sense of speed between India and Japan. She also explained the importance of mutual understanding between India and Japan, and the effectiveness of studying in Japan as an initiative to let Indian students know about Japan. Mr. Otani pointed out the need for changes on the part of Japanese companies in terms of English language skills and speed in accepting Indian students who came to Japan for internships.

​     At the end of the discussion, Professor Horita asked about ways to make collaboration easier, to which the panelists responded as follows.

​     Ms. Kobayashi mentioned that this symposium was meaningful for her and emphasized the importance of increasing opportunities for information exchange. Prof. Koyama pointed out that it is necessary to create a framework for cooperation, not only with large corporations but also with people in the family businesses in the future, and in addition, it is important to increase opportunities for information exchange such as symposiums. Mr. Otani expressed his hope that Indian students who had come to Japan for internships and students of Shimane University would contribute in promoting the Japan-India exchange by acting as a bridge. Finally, Mr. Nakamura expressed his recognition of the current situation that we are in the phase of accelerating Japan-India exchange, and pointed out the importance of deepening mutual understanding and continuing exchange between Japan and India.

​     Prof. Naoto Sekimura, Vice President of UTokyo, summarized things at the end of the symposium. Prof. Sekimura explained that the key points for building a platform gained since the first symposium held in 2018 were (1) linking university initiatives, (2) linking the regions of Japan and India, and (3) cooperating with industry, and that this symposium provided good practices and prospects for each of these points. He explained that this symposium was to show the good practices and prospects for each of these points. He also pointed out that while industry and universities do not necessarily place the emphasis on the same things, it is important to build a cooperative relationship. He said that it is important for universities to find universality in diversity and to develop Japan-India exchange based on intellectual exchange.

​     He also appreciated the fact that the symposium was able to connect networks of networks by getting people who already have networks to interact online in the face of the COVID-19 calamity. He concluded by expressing his hopes for the development of a platform based on such activities, which will become extremely important in the post- COVID-19 era. 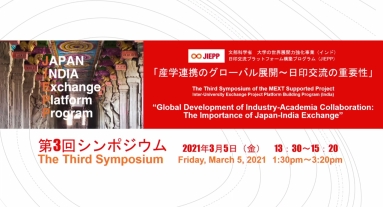 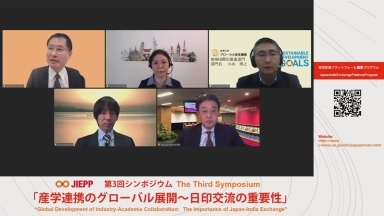