Special Lecture “The State of the Universe” by Prof. Brian Schmidt, the 2011 Nobel Prize Laureate in Physics

Special Lecture “The State of the Universe” by Prof. Brian Schmidt, 2011 Nobel Laureate in Physics and Vice-Chancellor of the Australian National University, will be held as follows. We look forward to your participation!

The State of the Universe

Our Universe was created in 'The Big Bang' and has been expanding ever since. Professor Brian Schmidt will describe the vital statistics of the Universe, including its size, weight, shape, age, and composition and explain how astronomers have used observations to trace our universe's history back more than 13 billion years, leading them to ponder the ultimate fate of the cosmos.

Professor Schmidt will also try to make sense of the Universe's past, present, and future - and describe what we know and what we do not yet know about the Cosmos.

Professor Brian P. Schmidt AC FAA FRS was appointed Vice-Chancellor of the ANU in January 2016. Winner of the 2011 Nobel Prize in Physics for his discovery that the expansion rate of the Universe is accelerating, Professor Schmidt was an astrophysicist at the ANU Mount Stromlo Observatory and Research School of Astronomy and Astrophysics before becoming Vice-Chancellor. Fellow of the Australian Academy of Science, The United States Academy of Science, and the Royal Society, he was made a Companion of the Order of Australia in 2013. Professor Schmidt completed his Astronomy Master's degree (1992) and PhD (1993) at Harvard University.

Moderator: Professor Ken'ichi Nomoto, Kavli Institute for the Physics and Mathematics of the Universe, UTokyo 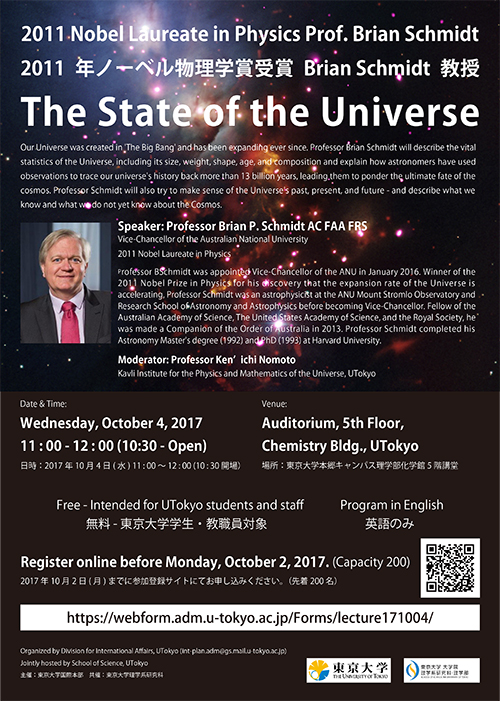