Engineer ReyesTatsuru Shiroku became interested in robots as a junior high school student, around 2005. Fifteen years later, he harnessed his expertise in robotics hardware and software to establish a startup, ARAV Co., Ltd., and, as CEO, is focused on sparking a digital transformation that will make construction sites safer.

Shiroku’s passion for robotics has never dimmed, but his career path has taken several twists and turns. His research pivoted from bipedal and marine robots to autonomous driving. In fact, Shiroku’s extensive experience in robotics was integral to his success in developing a device that can be mounted on construction machines and is capable of controlling them remotely from a computer, tablet or smartphone.

“My immediate goal is to complete the development of autonomous driving technology for construction machines, such as a hydraulic excavator, to enable convenient and safe daily operations at construction sites,” Shiroku said. His sights also are set on bringing the construction sector up to speed in digitalization.

ARAV’s enterprises have attracted considerable attention from the construction sector as remedies to address a severe labor shortage and to reduce deaths at construction sites, which account for one-third of fatal industrial accidents in Japan.

Immersed in mechanical robotics as a youth

Shiroku hails from the island prefecture of Okinawa in southern Japan. When he was a junior high school student, he was fascinated by a TV program about a robot contest among technical college students. Keen to participate in the annual competition, Shiroku entered the National Institute of Technology, Okinawa College after junior high school. He won the competition when he was a fourth-year student at the technical college — the contest’s theme that year was bipedal/multipedal robots.

After immersing himself in the research of marine robots, which Shiroku began during the college’s two-year advanced course, he decided to go on to graduate school. His choice was a master’s program at the University of Tokyo’s Graduate School of Frontier Sciences. “I joined the laboratory of Associate Professor Toshihiro Maki because it was the only university laboratory I could find that offered deep-sea research,” Shiroku said. His research aimed to gauge natural resource deposits under the seabed by sending a robot to the bottom of the ocean to take photographs and gather samples.

In parallel with this research, Shiroku pursued a hobby that later became a business: making exoskeleton robot suits. These robots, which are up to 3 meters tall, augment human mobility when a person gets inside the suit and moves. In October 2013, when Shiroku was a second-year student in the master’s program, he set up a company, called Skeletonics, with some colleagues from his technical college days.

But before long, Shiroku and his colleagues formed different views about where Skeletonics should be headed, and he left the startup in the spring of 2016 to work at a major Japanese automaker. The company, impressed by his research on marine robots, deployed him to a section developing autonomous driving technologies. There, he first became aware of Mobileye, an Israeli startup that later became a subsidiary of major U.S. chipmaker and technology company Intel Corp. “It was a startup that could stand on an equal footing with a mega company,” Shiroku said. “I gradually developed the urge to launch another startup.” He quit the auto company after 17 months to go to Silicon Valley in the U.S. state of California to learn from the startup culture there. He established a company in the United States, too.

In Silicon Valley, Shiroku started developing autonomous driving technologies for trucks, which lag behind those for passenger cars. “It was extremely challenging to develop all the technologies required, from gathering information through a camera to moving a truck, all by myself,” he said. He bought a used car with hydraulic power steering like that found in trucks, on which he mounted an autonomous driving device and conducted experiments on the driverless vehicle as it traveled at 90 kilometers per hour. However, commercializing this device seemed to be difficult, if not impossible.

But as doubts began creeping into his mind, Shiroku unexpectedly received a text message from someone working in the Japanese construction sector who had seen his social media posts and wanted some advice. As Shiroku participated in online conferences spanning the Pacific with various parties in the industry, it dawned on him that demand for the technologies he developed could grow if they were applied to construction machines. That stands to reason. He would more easily be able to develop the required autonomous driving technologies for construction machines, which are allowed to operate only on private land, than trucks, which travel on public roads and are subject to different kinds of regulations. Shiroku cut short his planned two-year stay in the United States by six months and returned to Japan.

Assistance to set up a startup

Shiroku established ARAV in April 2020 with generous assistance from the University of Tokyo ecosystem for startups. He regretted launching Skeletonics as a small business with the founding members’ own money, even though he received tips from the university’s Division of University Corporate Relations on how to launch a startup by raising outside funds. This time, following advice from his mentor at the division, he enrolled in the FoundX program, which provides know-how on launching and operating a startup to graduates and researchers of the university. He also got help in raising capital and approval to house his company at the Entrepreneur Lab in a research building on the university’s Hongo Campus.

Since then, ARAV has succeeded in moving a crawler and hydraulic excavator in real time from 1,000 kilometers away in a joint research project with construction companies and machinery makers. In November 2020, the Ministry of Land, Infrastructure, Transport and Tourism acknowledged ARAV’s remote-control technology for a grass cutter as an innovative technology to enhance productivity at construction sites.

ARAV is researching and developing autonomous driving technologies with more than 10 companies, including Itochu TC Construction Machinery Co., Ltd., a machinery supplier. Shiroku said he has received inquiries from various companies, but plans to prioritize development of autonomous driving technologies for hydraulic excavators, which are commonly used at construction sites in Japan.

“We handle our work in a matter-of-fact manner because we know exactly what we have to do,” Shiroku said. “Clearly, many companies have problems that must be tackled. It will take time, but we want to make devices that can help them solve their problems.” Now, Shiroku has no doubt about his company’s direction: He is diligently following his passion to make digital transformation at construction sites a reality. 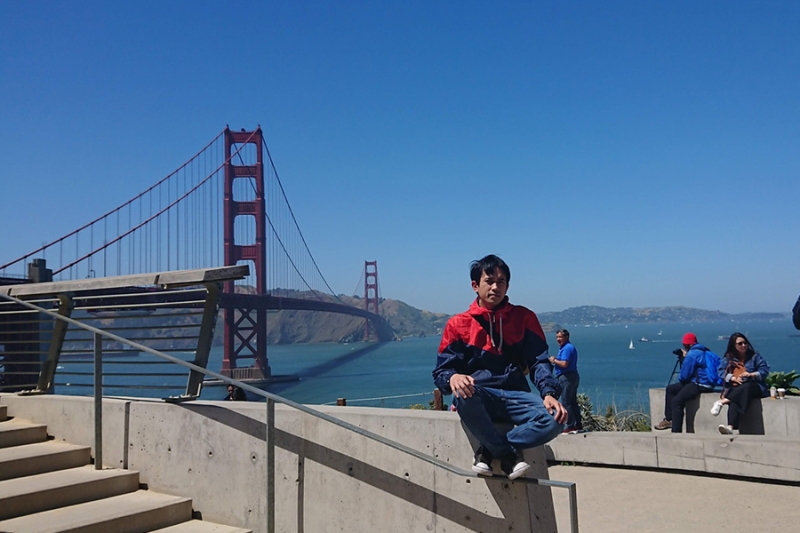 ARAV is the third company CEO ReyesTatsuru Shiroku established. Set up in April 2020, the company researches and develops devices to remotely control construction machines and enable autonomous driving. The name stands for Architectural Robust Autonomous Vehicles. ARAV was accepted for the 1st Round program offered by UTokyo Innovation Platform (IPC), which offered help in hiring personnel and finding business partners. In 2021, ARAV received 63 million yen in capital from UTokyo IPC. The company has more than a dozen engineers conducting research and development, but plans to recruit more to prepare for the mass production of devices to accelerate the digital transformation revolution. (Shiroku is pictured visiting the Golden Gate Bridge during his stay in California's Silicon Valley.) (Photo courtesy of ReyesTatsuru Shiroku)