Same time, same place, on the night of the new moon Univ. of Tokyo Researchers Locate the Spawning Area of the Japanese Eel

The life of eels and their spawning in particular had long been shrouded in mystery, a mystery that a University of Tokyo team set out to solve through an ambitious ocean research project starting in 1973. After sampling for eel larvae during multiple expeditions in the western North Pacific over almost 40 years, the first collections of Japanese eel eggs were made in May and June of 2009 and 2011, allowing the team to successfully determine the exact location of spawning sites of this important species.

A Date on the High Seas: Finding When and Where Japanese Eels Spawn 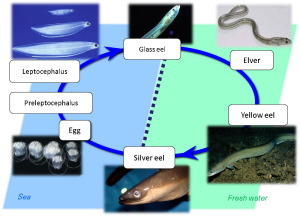 The life cycle of the eel

The eel is a familiar and much-loved fish in Japan, but it was not widely known that Japanese eels (Anguilla japonica) migrate across the western North Pacific Ocean to reproduce, in some cases over distances of more than 3,000 kilometers, because until recently when and where they spawn had remained a mystery.

This mystery of their lives has fascinated people for more than 2,000 years ? the Ancient Greek philosopher Aristotle said of eels that they are born from the “earth’s guts, that grow spontaneously in mud and in humid ground”.

In 1973, researchers from the University of Tokyo’s Ocean Research Institute (currently, the Atmosphere and Ocean Research Institute) embarked on a survey vessel, the R/V Hakuho Maru, on the first high-profile research expedition to study the Japanese eel. Their primary aim was to discover the spawning area of the Japanese eel. Professor Katsumi Tsukamoto, who is now at the forefront of eel research, took part in the project as a graduate student of the University of Tokyo.

After being spawned in the ocean, Japanese eels, in the form of flat, leaf-like larvae called leptocephali, were thought to be swept by the Kuroshio Current to recruit to rivers in East Asia, but where they had originated was a mystery. Assuming that examining the collection locations and size of leptocephali would give a clue to where they spawn, the team began sampling and examining the larvae.

A Great Voyage of Hypothesis and Demonstration 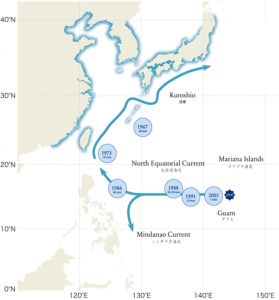 Research expeditions in the Pacific Ocean

To sample leptocephali, the team repeatedly towed a plankton net 15 meters long and 3 meters across in prospective Pacific waters. Starting in a region south of Okinawa of southwestern Japan in 1967, the team then moved to areas east of Taiwan in 1973 and Luzon (the largest island of the Philippines) in 1986, and then to the west of the Mariana Islands starting in 1991.

Locating an eel spawning area in a great ocean is not easy task and most sites are unknown for the 19 freshwater eel species or subspecies around the world. Such sites are elusive because they may not exceed a volume of about 1000 cubic meters for a single instance in which many eels release their eggs at the same time. The task becomes all the more difficult because the eggs hatch quickly ? in about a day and a half. To overcome these constraints of time and space, Tsukamoto and his colleagues advanced, and ultimately proved, a number of bold hypotheses.

The first was the New Moon Hypothesis. Examining the otolith (ear stone) of a leptocephalus reveals the number of days that have passed since hatching and after being spawned. From this, Tsukamoto found that leptocephali sampled in July had hatched in the preceding months of May and June, each on a night near a new moon, a finding that prompted him to hypothesize that synchronized spawning happens on a large scale on new-moon nights during the spring and summer.

The second was the Seamount Hypothesis. From data on leptocephalus distribution and ocean currents obtained from many survey cruises, the team determined that the eels spawned in a region near 15°N and between 142° to 143°E, where a ridge of seamounts, some as high as Mount Fuji (3,776 m), rises from the ocean floor 4,000 meters below. Tsukamoto argued that male and female eels may be able to detect special odors, water turbulence, upwelling, local magnetic fields or other characteristics associated with the seamounts that would help them to gather together to mate near the ridge.

The third concept was the Salinity Front Hypothesis. Seawater masses of slightly higher and lower salinity meet and cross the seamount region. As the data indicated that leptocephali are found just south of this front, Tsukamoto and his colleagues theorized that eels use this salinity front to identify the latitude at which they should spawn.

The Scientific Method: A Deductive Approach in Action 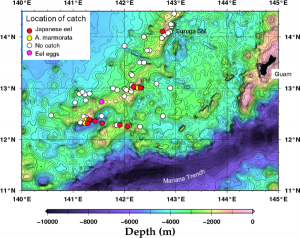 Collections of small larvae over the years during their surveys showed that the Japanese eel spawned far offshore in a band of westward current called the North Equatorial Current, but exactly where spawning events were taking place was still difficult to determine.

However, in May of 2009, at last, Tsukamoto’s team successfully collected 31 Japanese eel eggs at a depth of 150-200 meters in the open ocean, near the southern tip of the West Mariana Ridge and just north of the Mariana Trench, the deepest place in the world’s oceans. This collection of eggs, the first ever for any species of anguillid eel, was made in the deep of the night at the ridge’s intersection with the salinity front, just two days before a new moon. All at once, all three of Tsukamoto’s hypotheses gained significant supporting evidence.

In the recent sampling expedition of 2011, the team set itself the goal of pinpointing eggs fresh from fertilization, resulting in successful collections of 147 eggs in several net deployments in June, which again were first caught during the darkness of a new moon night and south of the salinity front along the seamount ridge, further validating the three hypotheses.

Elaborately designed “grid surveys” also contributed to these successes. First employed in the fourth Hakuho Maru expedition (1986), the grid survey is a method for systematizing the sampling process. A chart is divided into square sections like a grid, each section containing a certain area by latitude and longitude. Sampling is made at each intersection of latitudinal and longitudinal lines on the grid, as a way of surveying the entire target region at a predetermined level of resolution.

Of this, Professor Tsukamoto said, “I’m from the lab-research side of fish physiology, not from the field-study side. This may have helped me turn to various hypotheses and the idea of a grid survey.” His experimentally-oriented deductive approach has been a key to the success of his fieldwork. By collecting data, examining them and formulating hypotheses, and then testing the hypotheses, Tsukamoto and his team have now gained a greater understanding of when and where the Japanese eel spawns than any other species of eel in the world. 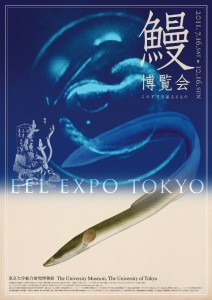 Poster for Eel Expo at the University Museum

Tsukamoto’s team collaborated with the University Museum of the University of Tokyo to present an exhibition, EEL EXPO TOKYO 2011, which introduced these research frontiers and other aspects of eel biology including their evolutionary origins, migratory behavior, endocrinology, and development. This EEL EXPO overviewed not only scientific research but also the connections of eels and humans, such as cultural aspects, history, legends and socioeconomics surrounding these mysterious and important fishes.

Eels have long been a favorite delicacy in Japan, and today, Tokyo has some 950 restaurants that specialize in eels cooked in the traditional way. More than 99.5% of these eels are farmed, raised from wild juveniles called glass eels that normally accumulate in estuary regions as they prepare to enter freshwater. The implementation of “full farming” for production of glass eels from artificial spawning and hatching may protect wild eel stocks from further decreasing worldwide. This burgeoning technology has a “fair chance of success” according to Tsukamoto, and this is another area of research where he is now taking an active role.

Other than locating the spawning areas and researching issues related to eel aquaculture, Tsukamoto’s team has produced a huge volume of scientific research on eels in hundreds of research papers, which have often pushed forward the frontiers of understanding of these remarkable fishes. Over the years they have discovered a new species of eel, traced the origin and evolution of the freshwater eels through molecular genetic analysis, discovered that many eels never actually swim up into rivers as they were thought to, analyzed various behavioral aspects of eel migration, elucidated the reproductive physiology of eels, tracked eel migration with satellite-aided monitoring systems, and studied the legendary delicious “blue-green eel”, in addition to a full range of studies on the biology of eels. Tsukamoto’s laboratory has also been studying the life history and ecology of the species of tropical freshwater eels that live in equatorial regions of the Indo-Pacific, which have never been investigated in detail.

Tsukamoto emphasized that the team’s success was due to three factors. “The University of Tokyo has the excellent research vessel Hakuho Maru, and we could use the Atmosphere and Ocean Research Institute’s overall superb capabilities as a center of ocean research that synthesizes various fields of science, such as physical, chemical, biological oceanography, earth science, fisheries science and climatology” and further, he added, “The most important was, being surrounded by excellent colleagues and first-rate young scholars”.

The three-month eel exhibition held at the University Museum from July to October 2011 showcased images of what Tsukamoto’s team has accomplished in eel research, with displays of wild eel eggs collected in their spawning area offshore, live leptocephali elegantly swimming in a specially designed circulating tank, and a migratory silver eel with a leisurely tailbeat in a swim tunnel. Many visitors came to the exhibition and were impressed with this “Eel World” that they had never before experienced. The exhibition will travel to European and other Asian cities after Tokyo.

A Long-term Relationship, and an Essential Resource

The eel is important to cultures from the Maori in New Zealand to the first nations in the Americas. It is also central to various South Pacific myths and legends and appears in the earliest Japanese literature. Over the millennia it has provided the Japanese with the stamina to survive the heat of summer, and the first nations with the energy to survive the cold of the North American winter.? Throughout much of the world, humankind lived with, and on, the eel.

But Atlantic eels have almost disappeared from some parts of Europe and North America, and the Japanese eel is falling in numbers. The discovery of the Japanese eel’s Pacific spawning area offers us a new view of this mysterious fish as a living creature in its natural habitat, and may provide the key to preventing the further decline of this essential creature. 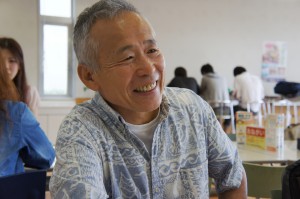 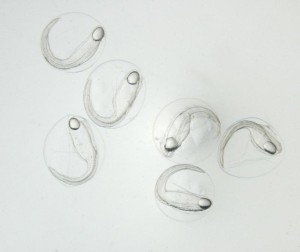 The first Japanese eel eggs ever to be discovered in the wild. ©Katsumi Tsukamoto, The University of Tokyo Atmosphere and Ocean Research Institute 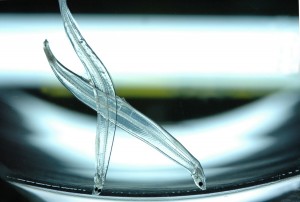 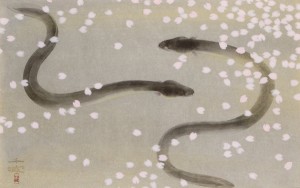