The Itokawa asteroid is disappearing, little by little, and will not outlast the solar system. 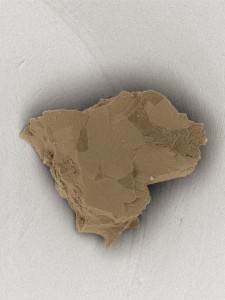 25143 Itokawa was discovered in 1997 and named for Hideo Itokawa, the father of Japanese rocketry. Resembling nothing so much as a pile of rubble, it is just 535m long and 209m to 294m wide. Itokawa orbits the sun between the Earth and Mars, making it an ideal target for a visit by a spacecraft. In November 2005 Japan’s Hayabusa spacecraft did just that.

In space, asteroids and other bodies experience a variety of types of radiation, the three main sources of which are solar wind, solar cosmic rays, and galactic cosmic rays. Each type of radiation has a different energy and leaves a different trace and penetrates to a different depth in the material through which it passes. Reading these traces can provide scientists with clues about the irradiation history of the material, and by inference about the history of the sources of that radiation. The problem is that meteorites on Earth all have one thing in common: they have been heated immensely during their entry into the Earth’s atmosphere. This extreme heating causes the meteorites to lose those traces retained in their surface layer.

Hayabusa gathered over 1,500 grains of material from Itokawa asteroid, and for the first time in history safely returned them to Earth in a sealed capsule, protected from the heat of atmospheric reentry.

The capsule containing the samples was opened and handled at the Japan Aerospace Exploration Agency (JAXA) clean facility under vacuum or nitrogen gas. By progressively heating each of three grains, measuring 40 to 60 micrometers in size, noble gases of solar origin or created within the particles at varying depths by the impact of cosmic rays were extracted.

The data gleaned from just these three particles enabled the researchers to determine the structure and history of Itokawa. Being such a small asteroid, it lacks sufficient gravity to compact into a solid body. Material is worn away from the surface by meteorite impacts and other means, causing the asteroid to shrink at a rate of tens of centimeters each million years. Itokawa will disappear within the next billion years, well within the 4.6 billion-year lifetime of the solar system.

This historic trip to Itokawa marks the start of a new era of exploration, going to satellite bodies further than the moon and returning with material for analysis at home on Earth. This research and that of researchers at other Japanese institutions analyzing the Hayabusa samples was highlighted in Science.