Further details on the LHC announcement 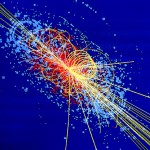 Computer simulation of decay of a Higgs boson. ©CERN

In a seminar held at the European Organization for Nuclear Research (CERN) on 13 December 2011, the ATLAS and CMS experiments at the Large Hadron Collider (LHC) presented an update on their searches for the Standard Model Higgs boson.

According to the CERN announcement, if the Standard Model Higgs boson exists, it is likely to have a mass in the range of 116GeV to 130GeV (ATLAS experimental data) or 115GeV to 127GeV (CMS experimental data). Both of the major LHC experiments, ATLAS and CMS, have found “tantalising hints” of the Higgs’ existence in this region.

The Higgs’ existence or non-existence will only be confirmed when further data is gathered and analyzed, which is not likely until later in 2012.