The European Organization for Nuclear Research (CERN), Geneva, announced last December 13 it has found tantalizing hints that could lead to the discovery of the Higgs boson, a hypothetical particle predicted to give mass to all other matter. This result is presented by both the ATLAS and CMS detectors, which are constructed at the Large Hadron Collider (LHC), the giant particle accelerator at CERN1. As part of an international collaborative effort, the University of Tokyo (Todai) has three research teams in the ATLAS group assigned to the project to help analyze ATLAS data, each team competing with other international teams to make history by being the first to raise to 99.9999% the probability of the Higgs existing.

In the LHC, two beams of protons are accelerated in opposite directions up to a level approaching the speed of light, and are then smashed into each other. A collision of the proton’s component gluons (elementary particles) is thought to generate the Higgs boson (Fig. 1). 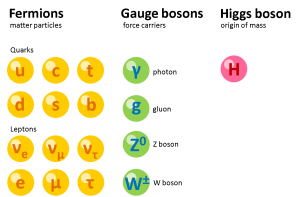 Almost immediately after the Higgs is generated, it decays into streams of other elementary particles, which then form into pairs of the same types of particles. ATLAS data teams have been working to clarify the channels of decay as the particles form into pairs of W, Z, photon (γ), tau (τ) ?or bottom (b) particles (Fig. 2). Along with other teams (some 10 teams cover each of the five particles), Todai has three groups analyzing the channels of decay, each team focusing on one of the WW, γγandττ pairs.

“It was around June last year that we noticed something puzzling,” says Shoji Asai, leader of the local teams and associate professor of the Department of Physics in Todai’s Graduate School of Science. “We saw very small excesses in signal distribution in WW-pair analysis data.”

As shown in Fig. 3, the WW pair emitted from Higgs boson decay in turn decay immediately into electron-neutrino or muon-neutrino pairs. Leading teams in WW analysis are the University of Wisconsin and the University of Michigan in the United States, Freiburg University in Germany and Todai in Japan, and they have all found small excesses in signal distribution.

In each major experiment, all competitive teams normally join hands and carry out identical work that will enable them to compile a single, coordinated report for formal presentation. Up to a month ahead of the presentation, they continue with this common approach after agreeing on the best analytical procedure to follow. Also, each team repeatedly checks the other teams’ data to minimize the chance of errors and until the same results are obtained. 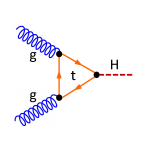 Fig.2 Higgs Boson Generation
A collision of gluons causes a pair of top quarks to exist very briefly, for 10-26 of a second, and their energy is carried on to generate the Higgs. The Higgs then decays into other particles almost immediately.

ATLAS is built to detect the wide range of energies resulting from particle collisions. Using the data, researchers can determine the direction and energy of an electron or a muon, a necessary step in determining the mass of pre-decay W particles and therefore the mass of the original Higgs.

In analyzing ATLAS data, all the research teams involved with the task face a common problem of how to interpret background phenomena following a collision. For instance, sometimes a particle may be mis-identified as an electron. Also, there are many electrons not emitted from Higgs boson decay.

“In order to accurately evaluate collected data, a good deal of attention must be paid to the background phenomena,” says Asai. “We have to understand perfectly the response of the detector for the various particles.”

Previous experiments based on the Standard Model, the dominant theory to describe all known particles, showed that the Higgs boson, if it exists, is most likely to have a mass region of between 114-160 GeV2.So when further experimental results were revealed at a European Physics Society (EPS) conference last July and showed the possibility of a mass region occurring at around 135 GeV, the announcement caused much excitement among the attendees. However, further results from the coordinated research conducted by all decay-mode teams and announced in August at an international conference in Mumbai, India, did not show anything pointing to a noticeable excess of signals in the vicinity of 135 GeV. 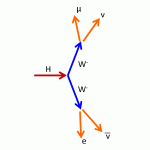 Fig.3 Higgs Boson Decay (WW pair)
The Higgs boson immediately decays into a pair of WW particles, with each of them also decaying instantly into electron-neutrino and muon-neutrino pairs.

“The possibility of the Higgs existing at 135 Gev has now been excluded, replaced by an argument that points to a range of 116-130 GeV,” Asai explains. “And this new 116-130 GeV range appears far more promising, because it’s based on additional decay-data forming into ZZ andγγ pairs, not WW pairs alone.”

According to Asai, still more data would allow researchers to narrow down the most likely mass region even further and improve the overall reliability of the data, paving the way for the “discovery” of the Standard Model Higgs boson. Given the currently dominant view that favors focusing on the region centering on around 125 Gev(Fig.4), Asai predicts confirming the reality of the Higgs, providing it exists in this region, is likely to come no later than this summer. But should the Higgs exist near the 116-Gev range of the region, Asai says its discovery will be confirmed late this year. This is because the lower the mass region, the more excessive are the background fluctuations.

What If Higgs Is Discovered? 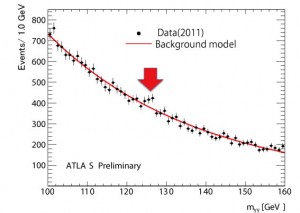 Fig4. The excess in signal distribution seen at 125 Gev is thought to indicate a Higgs particle.© ATLAS

The Higgs boson remains the only particle in the Standard Model yet to be discovered. What if it is been confirmed? How would particle physics be affected?

“It doesn’t mean an end to our research,” says Asai. “Rather, it represents the beginning of a new hunt in particle physics.”

The Standard Model describes “fermions” (matter-making particles) and “gauge bosons” that act as forces between the former. Unlike all these particles, the hypothetical Higgs fills the physical vacuum, for its existence would mean it creates a Higgs field. As particles of matter or force-carrier particles move through this field, they have mass conferred on them, analogous to the resistance we feel when walking in water. “The Higgs is a particle that makes ‘a vessel’ (field) for other particles,” says Asai. “Its discovery should lead particle physics to evolve a theory of vessels.” 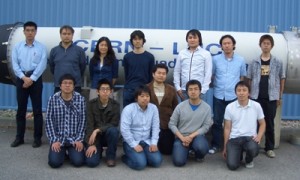 Another major vessel, along with the physical vacuum, is spacetime, described by the general theory of relativity. This theory, however, does not fit well with quantum mechanics, the basic theory of particle physics, leaving researchers without a definitive theory that explains both relativity and quantum mechanics. “The vessel concept would fill this gap,” Asai notes. “As such, particle physics would become even more intriguing.”

1 The LHC is the world’s largest particle accelerator built into a 27km-long circular tunnel outside Geneva, Switzerland. It went into full operation in the spring of 2010.

2 1 Gev=109 one billion eV or electron volts. 1 eV equals the amount of kinetic energy obtained when accelerating one electron at 1 volt. 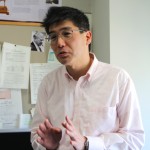 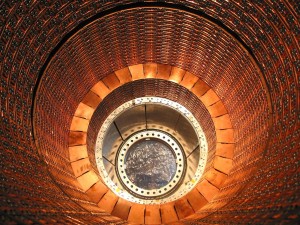 A view inside the liquid-argon calorimeter endcap. The circular inner bore of the EMEC, front and rear HEC wheels. © CERN 2011