First Todai Research, on site Introducing medical technology at the University of Tokyo

On Tuesday, 8 January 2013, the University of Tokyo (Todai) Public Relations Office organized the first in a series of “on site” events, introducing Todai’s research to members of the foreign media and science attaches at foreign embassies in Japan. The theme of this event was “Japanese medical technology R&D: from interdisciplinary cooperation to clinical application,” and took fourteen participants to see the cutting edge of Todai’s medical technology research “on site.” 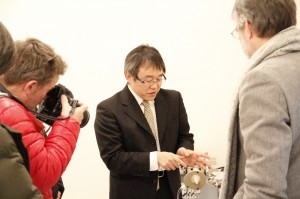 Professor Mamoru Mitsuishi and Associate Professor Naohiko Sugita’s research group develops highly-advanced systems for robot-assisted and minimally invasive surgery. The research group developed a low latency codec to reduce data-transmission time-lag, enabling the use of conventional network infrastructure for long-distance surgery. Graduate students in the group demonstrated a master-slave surgical robot that has been used to perform a remote operation on an animal in Thailand, and a bone cutting robot for orthopedic surgery, both of which minimize patient impact and promote rapid recovery.

Associate Professor Ken Masamune’s and Associate Professor Yoshikazu Nakajima’s research groups develop image-guided therapy systems. Nakajima’s group demonstrated their highly-accurate laser alignment system, which emits laser guides onto the surgical field and surgical tool, ensuring exact alignment and removing the need for the surgeon to look away from the field of operation. The system adjusts the laser guides to compensate for body movements and has been tested in over 50 clinical cases. Masamune’s group demonstrated an imaging system that provides surgeons with live information to guide surgery within an MRI environment, and a novel endoscope and laser ablator that has been developed for minimally invasive fetal surgery. This is currently undergoing further development with a view to entering clinical trials in the future. 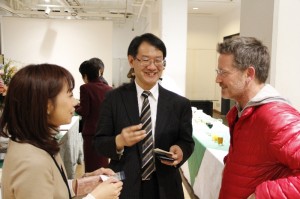