Motor proteins power the internal logistics of all cells, and affect all aspects of the organism from the cellular right up to the whole body level. It takes a variety of techniques to understand the workings of these tiny powerhouses, but Project Professor Nobutaka Hirokawa and his research group at Todai’s Graduate School of Medicine have mastered them all as they lead research into the kinesin superfamily of motor proteins.

It is easy to think of the cell as a fluid-filled balloon containing floating organelles such as the nucleus and mitochondria. But in reality microtubules are laid out regularly within each cell, and cargos such as mitochondria, membrane vesicles and the like are moved along these rails in a process called intracellular transport. Carrying these cargos are microscopic motor proteins.

Project Professor Nobutaka Hirokawa of the University of Tokyo’s Graduate School of Medicine, who has long been investigating the mechanism of intracellular transport, describes the incredible power of its tiny workers. “On a human scale, the work performed by these motor proteins is equivalent to a person running along a 5m-diameter clay pipe at a speed of more than 100 meters a second while carrying a 10-ton truck.”

Hirokawa’s research was first triggered by a desire to directly observe the mechanism behind neurotransmissions. In 1980 he developed a “quick freeze” procedure, whereby he froze cells rapidly so as to preserve their structures. This snapshot technique enabled him to fix a cell’s inner workings for subsequent examination by electron-microscope.

“I wanted to understand how motor proteins work in cells,” he says. “It took a variety of techniques, but I finally managed to catch a motor protein in action.” The photo that Hirokawa captured is the one above, showing a tiny motor protein carrying a huge cargo along a microtubule. Hirokawa’s research didn’t stop there, however. He then went on to research motor proteins at the molecular level and identify those active in the cell.

In 1985 a team of US researchers discovered kinesin, a new motor protein detected among the components that make up axons, the nerve fibers which extend out from neural cells. But their research method destroyed the cell, and so they were unable to observe the motor protein in action.

Around the same time, a separate research group in the US discovered another motor protein, dynein. While kinesin transports loads along a microtubule from the cell body to the axon terminal, dynein works similarly but in the opposite direction.

“They seemed to have been satisfied with just having discovered a motor protein moving in each direction. But through my observations under the electron microscope, I realized that there must be many varieties of motor protein,” says Hirokawa. Furthermore, rather than just investigating the axon’s constituent components, he decided to use gene sequencing to identify the different proteins. This was at a time when the human and mouse genomes were only just beginning to be described. 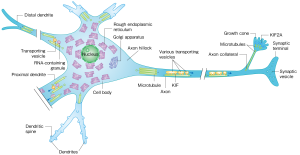 Motor proteins transporting a range of cargos in a neuron.

To search for protein genes with characteristic sequences in the genome today is the standard approach to finding specific genes. Back then, however, employing a computer for sequence analysis was rare, yet it enabled the discovery of a succession of new motor proteins which Hirokawa named the “kinesin superfamily” (KIF). In total, he identified 45 KIF genes ? all there are to be found in mammals.

Hirokawa’s research group has since elucidated the “character” of almost all these KIF proteins by determining what cargo each carries, how the protein recognizes the cargo and couples with it for transportation, and how the cargo is unloaded. This work required a number of diverse approaches, so the group applied cutting-edge technologies along with original techniques, a combination of efforts that has resulted in the publication of a huge number of influential research papers.

In 1997 the Hirokawa group detected KIF17 based on its gene sequence. Initially, the researchers noticed that there were many KIF17 molecules located in the dendrites of cortical neurons in the brain, and that they move along at a speed of 1.2 microns per second towards the dendrite terminal from the cell body. They also observed that the cargo carried was a membrane vesicle incorporating an NMDA-type glutamate receptor. 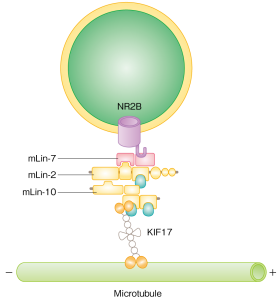 Yet, just how KIF17 proteins couple with their cargos remained unknown. Hirokawa investigated protein-protein interactions by employing a yeast two-hybrid system, an emerging research method at the time, and found that the protein mLin-10 was bound to KIF17. As mLin-10 had previously been reported as coupling with an NMDA receptor via two other proteins, he hypothesized that KIF17 may be transporting the NMDA receptor. Subsequent experiments on mice proved his hypothesis correct.

The next question to answer was how does KIF17 unload its cargo when it reaches its destination? Hirokawa noticed a readily-phosphorylated amino acid at the cargo-binding site of the KIF17 molecule. He also discovered that calmodulin kinase, an enzyme that phosphorylates proteins in the presence of calcium ions, was coupled with KIF17 in dendrites. In a follow-up experiment using fluorescent proteins to see if the linkup of KIF17 and mLin-10 shows any change, he confirmed that when KIF17 is phosphorylated by calmodulin kinase the two proteins separate and the cargo is released.

As the mechanisms of cargo loading and unloading become clear, Hirokawa’s research advanced to the next stage. “I wanted to know how this mechanism was related to organism-level function,” he explains.

The NMDA receptor transported by KIF17 plays the essential role of receiving neurotransmitters on the surface of a synapse, and as such is a vital location at which communication between neurons takes place.

Elaborating, Hirokawa says, “Supposing that an NMDA receptor from the cell body couples with KIF17 and then moves to the dendrite terminal, where it then decouples from KIF17, I concluded KIF17 should also be involved in higher brain functions such as memory and learning.” To test this theory, he created a mouse that had elevated levels of KIF17 and compared its learning and memory performance with a wild-type mouse.

KIF17 cargo unloading mechanism. Vesicle-carrying KIF17 couples with calmodulin. When a calcium ion is introduced, calmodulin phosphorylates one of the KIF17 amino acids, causing the protein to release its cargo.

As expected, the KIF17-rich mice showed better working and spatial memory than wild type mice. But surprisingly the number of NMDA receptor cargos had also increased. The more NMDA receptors that KIF17 transported, the more NMDA receptors and KIF17 proteins the neurons produced in a clear example of positive feedback. The exact opposite was also shown in mice unable to produce KIF17. It is often said that “the more you study, the brighter you get.” The truth of this saying was proven in mice.

As a consequence, Hirokawa says emphatically, “In research on memory and learning, attention had been overly focused on cell surface components, such as potential-shaping ion channels and synaptic receptors. We have shown that intracellular transport is also an important factor.”

Hirokawa’s research has produced many other important discoveries, among them the surprising finding that KIF3 plays a vital role in determining the development of sidedness, that KIF13A is involved in anxiety, while KIF19A has been confirmed to control the lengths of cilia growing on the cell surface. These examples each show the important role the intracellular transport system plays in determining whole organism-level characteristics.

All experiments conducted in one laboratory

Our understanding of the intracellular transport system, which started with images obtained by electron microscope, has made major advances thanks to these Todai researchers’ willingness to employ any new approach needed to overcome the challenges of their research. There is no other research group in the world that has employed such a wide range of techniques in-house: observation by electron-microscope, gene sequencing and protein interaction analyses, mouse-gene manipulation, mouse behavioral experiments, X-ray crystal structure analysis, and more. Yet Hirokawa’s team has employed them all. Behind this ambitious effort is his firm belief that excellent results can only be expected if well-motivated researchers master the techniques needed for their own research.

Motor proteins also include dynein and myosin, but thanks to the efforts of the Hirokawa group kinesin research is the most advanced and is the role model for research into the transport mechanisms of other motor proteins. It is now understood that KIF proteins are deeply involved with practically all vital phenomena. As such, KIF research has become a global concern. “Researchers nurtured in this laboratory continue to apply the research style learned here in other fields,” says Hirokawa. His all-embracing approach to research and his enthusiasm, along with the expertise obtained through past projects, will continue to make an impact both within Todai and abroad.