Second Todai Research, on site Introducing disaster mitigation and prevention research at the University of Tokyo

On Friday, 5 July 2013, the University of Tokyo (Todai) Public Relations Office organized the second in a series of “on site” events, introducing Todai’s research to members of the foreign media and science attaches at foreign embassies in Japan. The theme of this event was “Saving tomorrow by preparing Today: Todai’s approach to total disaster management,” and took twenty-two participants to see the cutting edge of Todai’s disaster mitigation and prevention research “on site.” 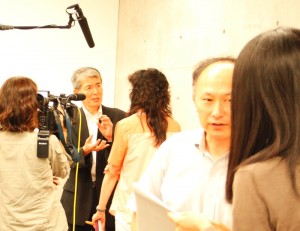 A pre-tour briefing by Professor Atsushi Tanaka of the Center for Integrated Disaster Information Research (CIDIR) outlined disaster mitigation and prevention research at Todai, after which Professor Teruyuki Kato of the Earthquake Research Institute described joint efforts between Japan and Indonesia to reduce the hazards from earthquakes and volcanoes and Professor Yasushi Asami of the Center of Spatial Information Science (CIS) explained how the CIS contributed to understanding the 2011 Great East Japan Earthquake.

The Ansei Earthquake Image and the namazu-e 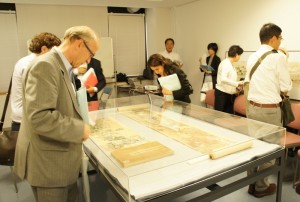 The Historiographical Institute deals with historical documents that pertain to Japanese history from ancient times until the Meiji Restoration. Its goal is to contribute widely to Japanese historical studies by collecting and analyzing a variety of historical documents in Japan and from overseas, and compiling and publishing historical document collections. On display were the Ansei Earthquake Image, a national treasure from the Shimazu family archives and a color woodblock print namazu-e or catfish. Based on the two images, Professor Hirofumi Yamamoto described the state of Edo before and after the Ansei earthquake that devastated Edo on 11 November 1855. These images are a means to understand past earthquakes in times when observation equipment was not available. 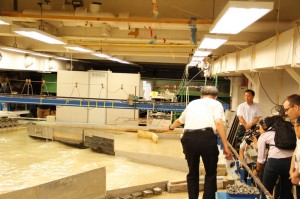 The Graduate School of Engineering launched a new interdisciplinary graduate program which focuses on disaster mitigation strategies for catastrophic flooding events. This innovative program integrates multiple disciplines for comprehensive and more appropriate evaluations of damage due to inundation and aims to develop practical and effective disaster mitigation strategies. A member of this program, Associate Professor Yoshimitsu Tajima described the findings of intensive field surveys just after the 2011 tsunami event and the various physical mechanisms of observed hydrodynamic characteristics, based on collected quantitative data, numerical analysis and laboratory experiments. A demonstration of the tsunami laboratory experiment showed how the tsunami propagates and behaves in the nearshore region and how it flows over the coastal structures and collapses these structures. 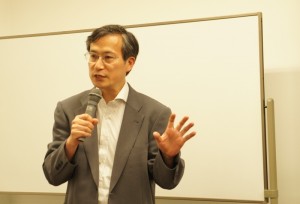 CIS Professor Yasushi Asami described how his group contributed in several ways to understanding the situation of the Great East Japan Earthquake, which hit on March 11, 2011. The measurements of the morphology of a coastal valley that was inundated by tsunami waves using TLS (Terrestrial Laser Scanning) and numerical simulation revealed erosional features caused by repeated tsunami waves since the mid-Holocene (a period from about 7,000 years ago till now). By visualizing GPS data of mobile phones in the Tokyo area of March 11, the group found out that almost all of human activity stopped immediately after the tremor, and recovered gradually at around 23:00. As a social outreach activity, the group is strongly supporting OpenStreetMap in which maps are created on a volunteer-basis enabling the free use and rapid update of spatial information. The variety of research activities at CIS will be of help in planning future disaster mitigation and prevention strategies. 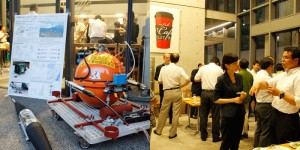 After the tour, participants continued lively discussion at an informal social event with researchers and university staff. At the venue, an ocean bottom seismograph and posters on disaster management by Assistant Professor Jun Tomio were also on display The event was attended by Senior Adviser to the Office of the President Stefan Noreen, and Public Relations Office Director Professor Shinobu Yoshimura from Todai.