Third UTokyo Research, on site Top down, Bottom up: Neuroscience at the University of Tokyo

The brain is the most complex of all organs and makes all of human science and society possible, yet it remains a mystery in many ways. Researchers in neuroscience at the University of Tokyo are tackling that mystery from the top down and the bottom up, seeking to understand how the brain works from the way we act and our psychological state, from how it malfunctions, and from the very proteins inside its cells. 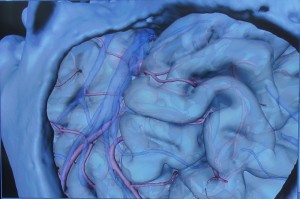 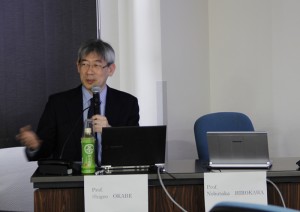 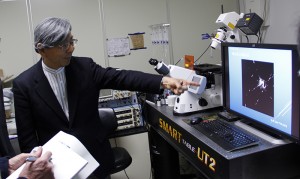 In the second part of the briefing, Project Professor Hirokawa provided an overview of his lifelong research into the kinesin superfamily of motor proteins, which are vital for intracellular transport. Much of the Hirokawa Laboratory’s research has focused on the function of KIFs in nerve cells, which provide an ideal environment for their study as proteins are built in the cell body and transported to synapses down long axons. Using a wide variety of techniques including observation by electron-microscope, gene sequencing and protein interaction analyses, mouse-gene manipulation, mouse behavioral experiments, X-ray crystal structure analysis, the laboratory has determined the mechanisms by which most of these kinesin motor proteins bind, carry and release cargoes and their functions within the organism. Some of those functions are closely tied with higher brain functions including learning and memory. On the tour, attendees saw many of the various types of equipment used in the research to establish the functions of each of the KIF proteins. 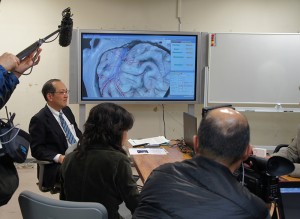 Recent advancements in medical imaging technology have allowed detailed preoperative examinations, but neurosurgeons still have to interpret large amounts of medical imaging data, and it is not uncommon for there to be several hundred to several thousand section images per case. Clinicians have to interpret and consolidate this information to form a 3-D image that can be used in preoperative planning. Professor Saito’s laboratory has developed image processing techniques and image fusion methods to construct 3D computer graphics with a high spatial resolution. On the laboratory tour Professor Saito demonstrated the system by showing how the fused 3D image information can be viewed and manipulated on computer or a specially-equipped iPad, which allows pre-operative demonstration and is particularly useful for the training of junior surgeons. 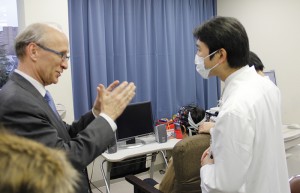 Objective biomarkers allowing accurate, early diagnosis and treatment of psychiatric and neurological disorders could help reduce the great burden they place on patients, their families and society. However, current diagnostic methods rely on doctors’ examinations and patient and family reports. Professor Kasai’s laboratory focuses on optical topography, a simple, non-invasive form of neuroimaging with minimal patient burden and suited to applications in mental illness. In conjunction with other medical and research institutions in Japan, Professor Kasai’s group is working to be the first in the world to apply this method of examination as an auxiliary means of diagnosis for mental illness. During the laboratory tour, Professor Kasai demonstrated the optical topography examination of brain function carried out as part of a major multicenter study to discover biomarkers for distinguishing psychiatric and neurological disorders.

Feedback from attendees was overwhelmingly positive, focusing on the importance of meeting the professors and hearing their research explained in their own words. One attendee commented that “I have attended all three versions and every time is more impressive and interesting,” and there were many requests to return and for private interviews with participating professors.