Straight from the pages of science fiction! Regeneration of human organs in large mammals

“Even if it’s published in Nature, I won’t believe it until I check it myself.” So says a smiling Professor Hiromitsu Nakauchi of the University of Tokyo Institute of Medical Science (also on the faculty at Stanford University), one of the leaders in the field of regenerative medicine. This attitude is perhaps indispensable when you work in research that attempts the impossible, the regeneration of human organs in large mammals such as sheep and pigs.

The regeneration of human organs 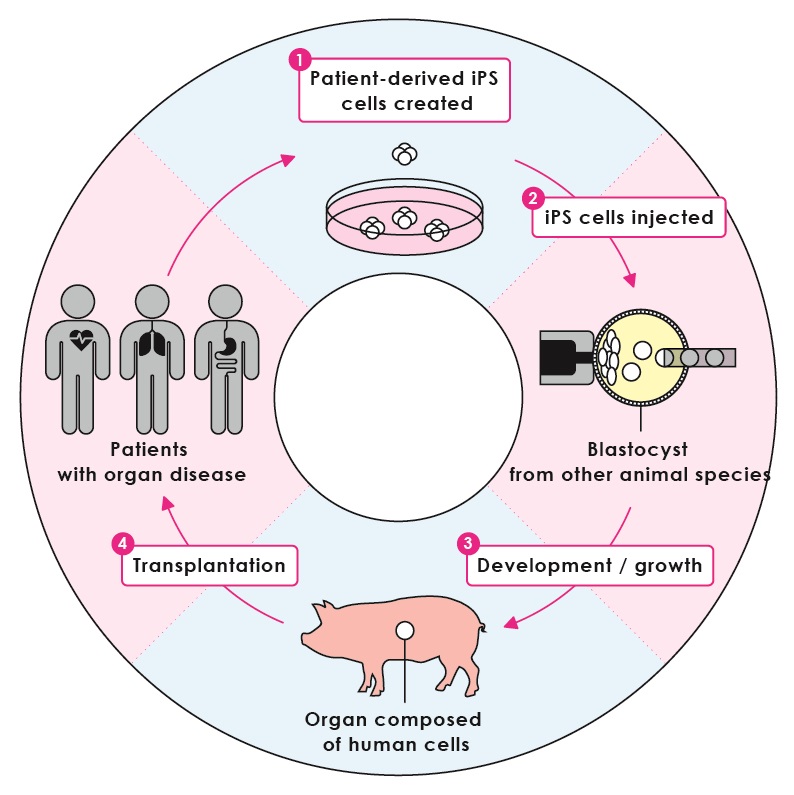 Figure 1：Regeneration of human organs
iPS cells are created from the cells of a patient with organ disease, then injected into the blastocyst of the host species that is unable to produce the target organ. This then grows into an adult organism, but with the target organ composed entirely of human cells originating from the iPS cells that were injected. This organ can then be transplanted into the patient.
© 2016 The University of Tokyo.

The scenario of regenerative medicine described by Nakauchi is as follows. First, induced pluripotent stem (iPS) cells are prepared from somatic cells extracted from a patient who is awaiting organ transplantation as a treatment for their disease. The advantage of regenerating organs from iPS cells, stem cells created from the patient’s own body, is that the problem of post-transplant rejection is completely eliminated. Next, an organ is regenerated using these iPS cells in a different animal species. An alternative proposal for regenerating organs involves creating a complex three-dimensional structure by stacking cells like building blocks in the laboratory, but this method is yet to prove successful. Therefore, encouraging the development process in another animal species is currently the most realistic approach. In the final step, the regenerated organ is transplanted into the patient.

It’s such well-depicted scenario, you might be tempted to think that there was nothing impossible about it at all. However, until his group published results suggesting that it was indeed feasible, Nakauchi said that experts were unanimous about its impossibility, going so far as to say that attempting to prove the proposition by experimentation would be pointless.

The key to the above scenario of regeneration is the concept of blastocyst complementation, described in 1993 by Dr Jianzhu Chen, Nakauchi’s former colleague, who was working in a field unrelated to regeneration. Dr Chen’s research on blastocyst complementation involved injecting embryonic stem cells from a normal mouse into a just-fertilized embryo (blastocyst) from a mouse engineered to be deficient in immune cells. This immunodeficient mouse then developed immune cells derived from the injected stem cells.

Figure 2：Blastocyst complementation
If a fertilized egg unable to produce immune cells is allowed to develop normally, the resulting individual lacking immune cells will die shortly after birth. On the other hand, if normal pluripotent stem cells are injected into the embryo shortly after fertilization (blastocyst complementation), the resulting individual will have immune cells derived only from the introduced stem cells and can survive after birth.
© 2016 The University of Tokyo.

Nakauchi wondered, “Could this technique be applied to organ regeneration? If we were to inject human iPS cells into the blastocyst of a large mammal such as a pig or sheep, genetically modified to lack an organ, would the organ be generated in the animal from the human cells?”

Nakauchi’s research now began in earnest. The first major question was whether blastocyst complementation between different species (interspecific blastocyst complementation) was actually possible. Nakauchi reminisces about the accepted wisdom at the time, “An organism in which genetically different cells are mixed is known as a chimera, and it was generally accepted that it was almost impossible to create a chimera between species. In fact, reports that chimeras of different species could not be created had been announced in prestigious scientific journals such as Nature.”

Creation of rat pancreas in a mouse body

In 2010, rat iPS cells were injected into the blastocyst of a mouse engineered to lack a pancreas, whereupon a rat pancreas was created within the mouse, a landmark feat reported by Dr. Toshihiro Kobayashi (currently at the University of Cambridge) and colleagues. This was a major announcement that actually consisted of three results, any one of which would have created a sensation: that organs with a complex three-dimensional structure could be regenerated by blastocyst complementation, that an interspecific chimera could be created, and that interspecific blastocyst complementation was indeed possible. 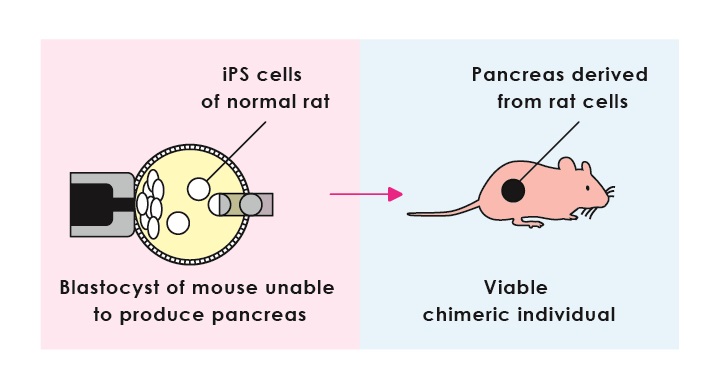 Figure 3： Interspecific blastocyst complementation
iPS cells of a normal rat are introduced into the blastocyst of a mouse that is unable to produce a pancreas. This develops into a viable chimeric individual with a pancreas derived entirely from rat cells originating in the introduced iPS cells.
© 2016 The University of Tokyo.

The key challenges remaining before the human organs could be regenerated in the manner described by Nakauchi were: (i) genetically engineering a large mammal that lacks a specific organ; (ii) achieving intraspecific blastocyst complementation using the large mammal; (iii) generating human iPS cells that are functional, even when injected into the blastocyst of the large mammal; and (iv) creating a human-animal chimera and resolving the attendant ethical concerns.

By 2013, Nakauchi had already overcome the first two challenges, and is now tackling the third, while addressing the ethical considerations. His research entails interspecific blastocyst complementation using sheep and human iPS cells. If it has a successful outcome, a magnificent story worthy of science fiction will finally come closer to reality. Realizing that dream, Nakauchi says, “Will require the support of young researchers willing to tackle risky research that may come to nothing.”

Without assuming from the outset that something is impossible, the key is to give it a try, embracing a healthy skepticism and comparing differences in current techniques and knowledge against those in place at the time of publication. Nakauchi confidently states that “Ingenuity is the courage to have a go.” This may be the secret behind Nakauchi’s ability to successively deliver new discoveries. 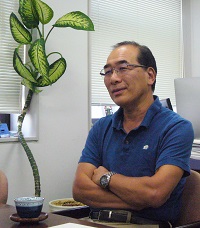 The Institute of Medical Science

Center for Stem Cell Biology and Regenerative Medicine, The Institute of Medical Science