How do medicines work? From this point of departure, University of Tokyo Professor Emeritus Masakatsu Shibasaki took up chemistry to quench his curiosity. In his quest to produce drugs in low-waste, environmentally friendly ways, Shibasaki has focused on asymmetric catalysis for many years. 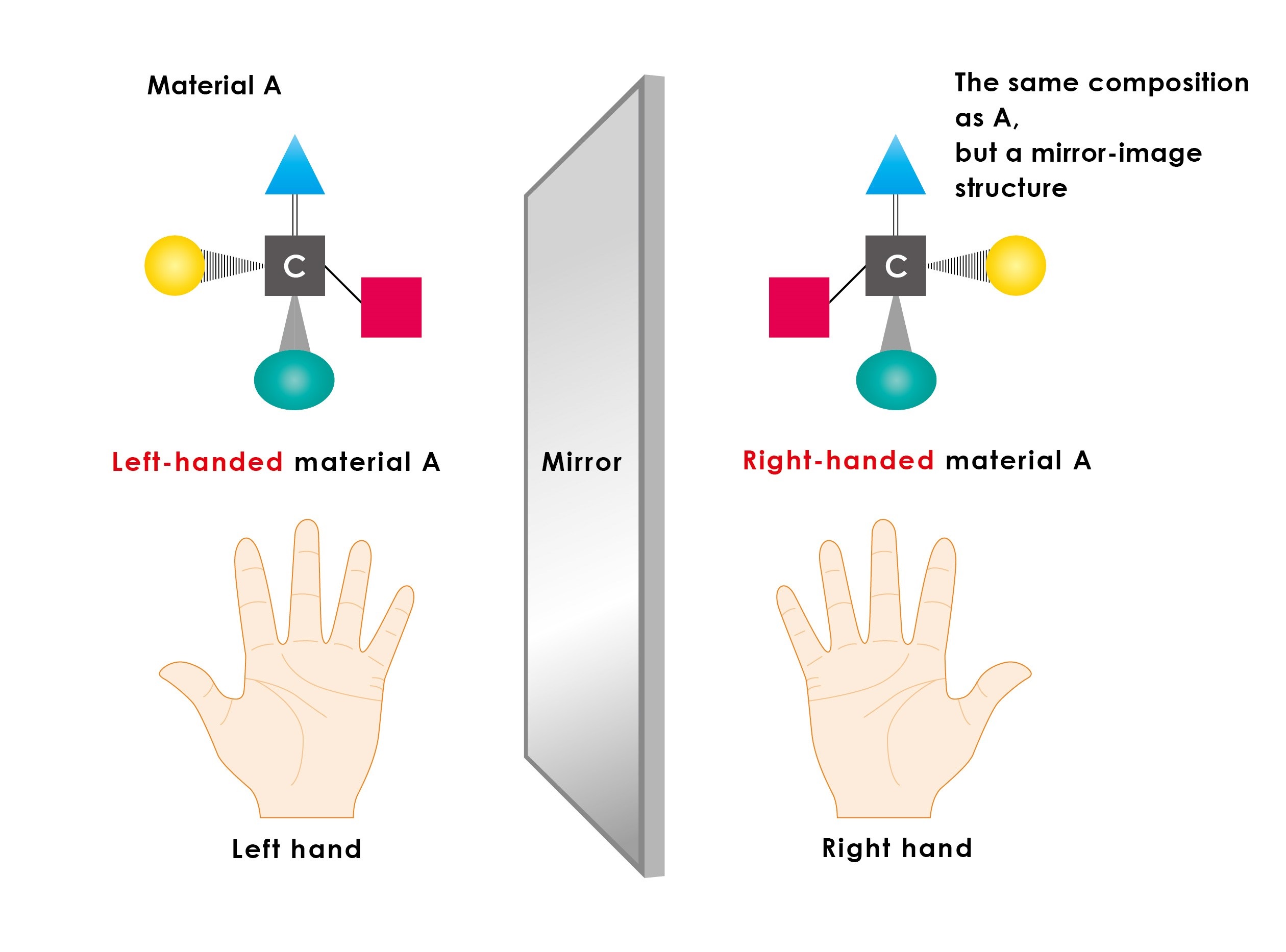 Figure 1: Left-handed and right-handed materials
Carbon atoms can be seen as having four protruding hands, and when the substituent at the end of each hand is different, multiple spatial structures are possible. The number of spatial structures grows with increasing complexity of each hand’s substituent, but the simplest structures are the right-handed and left-handed pair formed as a mirror image of each other. In pharmaceutical synthesis, if a chemical reaction is left to proceed naturally without intervention, left-handed and right-handed products are produced as a 1:1 ratio; therefore, instead of just the pure drug, the problematic material is also formed, and the product becomes contaminated. For this reason, asymmetric catalysis is needed.
© 2016 The University of Tokyo.

Asymmetric catalysts are materials that aid in the selective synthesis of “left-handed” and “right-handed” products.

Many compounds have related species constructed from the same number and types of atoms, yet have a different spatial (three-dimensional) structure, forming a mirror-image pair, or left-handed and right-handed compounds, much like our left and right hands (figure 1). All proteins in our bodies, which carry out many functions, including catalysis, are compounds constructed exclusively from left-handed amino acids. As such, just as your left foot does not fit in your right shoe, the difference between right and left can lead to major consequences for materials, such as drugs, that interact with our bodies. There are compounds in which one of the pair functions as a beneficial medicine, while its counterpart is ineffective, or in some cases even toxic. The thalidomide crisis is a sad reminder of the dangers of using a mixture of both compounds.

Consequently, right/left selectivity (separating right-handed and left-handed products) is indispensable in the synthesis of pharmaceuticals. The multi-point recognition asymmetric catalyst developed by Shibasaki has enabled selective reactions that in the 20th century were deemed close to impossible. 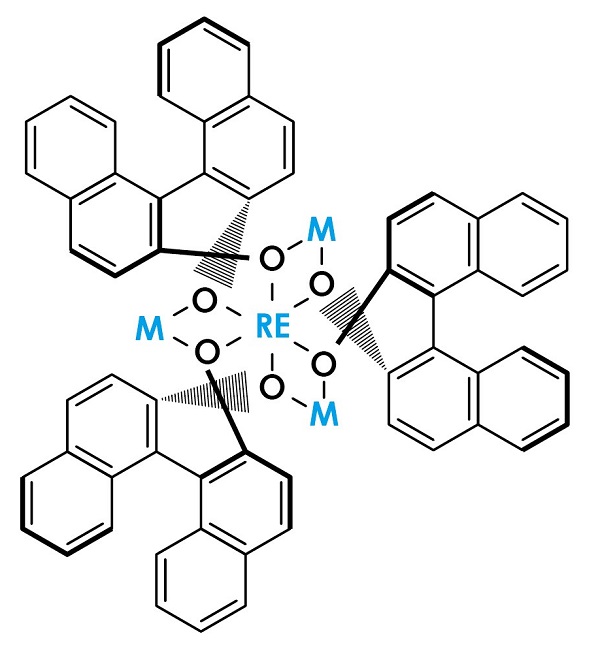 Figure 2: LLB catalyst
The LLB catalyst, one of the Shibasaki catalysts, is formed with the rare-earth metal lanthanum (La) at its center, an additional metal, lithium (Li), and the organic compound binaphthol (BINOL). Shibasaki and his collaborators, by replacing these two metals with others, created various multi-point recognition catalysts.
When enzymes and multi-point recognition catalysts fix the position of two molecules and activate them in order to promote a reaction, the exchange of electrons between the catalyst and the two reactant molecules becomes key to the reaction. The LLB catalyst contains both electron-receiving (Lewis acid) and electron-donating (Brønsted base) parts expressing reciprocal characteristics, through each of which electron exchange fixes the orientation and activates the reactants.
However, because acids and bases near each other generally react, prior to multi-point recognition catalysts, in general, only large molecule enzymes were thought to possess both characteristics.
© 2016 The University of Tokyo.

When Shibasaki was in his late thirties, to bestow small-molecule catalysts with the multi-point recognition function that only macromolecular enzymes possessed was regarded as nothing more than a pipe dream.

In our bodies, enzymes function as catalysts, and oftentimes as asymmetric catalysts, thereby promoting various selective reactions. Here, let us picture a chemical reaction of two molecules as the docking of two three-dimensional pieces. The reaction creating a connection between two carbon atoms in these two pieces to form a single product is intrinsic to pharmaceutical and other syntheses. However, depending on the position of the atoms in each piece, and their orientation in the pairings, two different composite products (left-handed and right-handed) can result. For selective formation of products, the relative position of these two pieces must be fixed simultaneously, and then the pieces docked with the correct orientation (that is, multi-point recognition). Enzymes perform this difficult function exceptionally well. Multi-point asymmetric catalysis was able to accomplish this artificially with small-molecule catalysts.

The birth and serendipity of multi-point recognition asymmetric catalysis 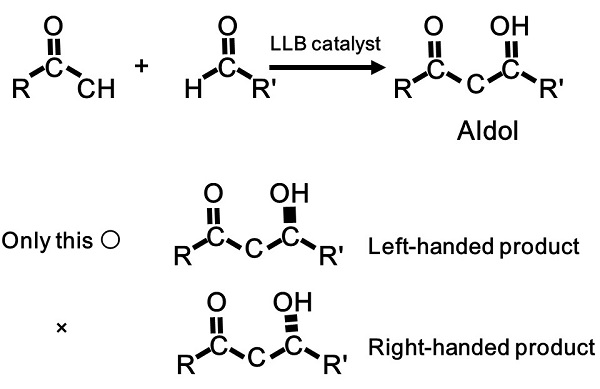 Through much trial and error, the first multi-point recognition asymmetric catalyst, the LLB catalyst (figure 2), was developed when Shibasaki was 44 years old. When dissolved in organic solvent, the LLB catalyst emerged as a wine-red solution. According to Shibasaki, “Several chance occurrences were involved [in the birth of this catalyst], such as the reagent used in the experiment turning out to be old and had taken up water, and a student in the lab used this without realizing it.”

Consequently, after studying the prepared catalyst in detail, it became clear that while retaining the originally planned structural units it possessed a structure so magnificent even the brightest minds in chemistry would have had difficulty conjuring up something like it. Furthermore, it soon became apparent that it was indeed this structure that enabled facile multi-point recognition.

Because of the structural versatility of this type of multi-point asymmetric catalyst some 40 variations, collectively known as Shibasaki catalysts, have been prepared. And unlike enzymes, which are quite selective about which compounds they react with, a single Shibasaki catalyst has the advantage of promoting the reaction of many types of compounds with each other.

“Even if I could live my life over again, I don’t think I could encounter this much serendipity,” explains Shibasaki expressing deep emotion. Serendipity, the chance discovery of something unimagined, isn’t just luck: Shibasaki’s multiple serendipities came about because he had an original concept and a rational design grounded in solid chemical knowledge and experience, and through persistent efforts. Based on his experience, Shibasaki has these words for students aspiring to become researchers: “To gain a viewpoint different from others, you should be prepared to put yourself on the line and dive into a field with a different culture.”

In 1997, the LLB catalyst facilitated the world’s first direct catalytic asymmetric aldol reaction utilizing an aldehyde and a simple ketone (figure 3). This reaction directly provides either left-handed or right-handed aldols, important structures in pharmaceutical synthesis and often obtained by the aldol reaction.

This sort of selective synthesis had previously been possible via the Mukaiyama catalytic asymmetric aldol reaction, developed by University of Tokyo Professor Emeritus Teruaki Mukaiyama. However, because the reaction is indirect involving many preparative steps, it generates twice as much waste as desired product.

By contrast, the Shibasaki catalyst by its very nature facilitates the reaction in one step, eliminating the by-products. This achievement is an important first step toward green chemistry.

Having said that, Shibasaki remains involved in ongoing research focused on large-scale, low-cost production of universally important drugs—like Tamiflu for treating influenza—using methods that leave minimal impact on the environment. 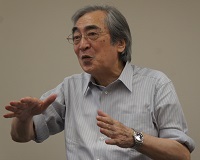