Living a long, healthy life Toward medical treatment based on individual genetic information

Thanks to advances in genomics, individualized medical treatments may soon revolutionize medicine. BioBank Japan collects the DNA samples from a huge pool of patients and shares data with other research institutions. Scientists at the Institute of Medical Science at the University of Tokyo, lead institution of BioBank Japan, are developing the infrastructure and encouraging social awareness to bring about the era of personalized medicine.

A commitment to personalized medicine

Personalized medicine is a new approach to medical care that looks at each patient’s genetic information to determine the best treatment, medication, and prevention programs. Think of it as the medical equivalent of getting clothes tailor-made to fit one’s body. What personalized medicine requires, above all, is genomic research to identify the genes associated with specific medical conditions. Assumptions must be set aside in favor of a systematic, objective analysis of genetic information gleaned from as many individuals as possible to statistically determine which genetic markers are associated with particular diseases and drug therapies.

Figure 1: BioBank Japan is the repository for a massive collection of DNA samples, blood serum, and medical records from a variety of patients
Its DNA storage unit, maintained at a temperature of 4 degrees Celsius, houses some 700,000 test tubes containing the DNA samples. The 200,000 serum samples are in test tubes chilled to minus 150 degrees Celsius with liquid nitrogen, and are retrieved using a precision robot arm to avoid error. Medical records of some 230,000 individuals are carefully stored and managed in a large database. Since its inception, BioBank has served as the “infrastructure” required to advance personalized medicine research under the mandate of the Japanese government.
© 2016 The University of Tokyo.

Research in the life sciences typically begins with a hypothesis, which researchers then set out to prove. “I found the approach taken by genomic research very refreshing, in sharp contrast to what I was accustomed to,” says Matsuda, who signed on right away. He quickly became convinced that “genome-based medical research would soon become the norm.”

To compile and consolidate genetic information that could be applied to personalized medicine, there would need to be some sort of “DNA sample bank” set up to provide researchers with a centralized stock of DNA samples from a broad range of patients. Matsuda’s next step was to become involved with the operation of BioBank Japan. “I had benefited from using their samples in my research, so I thought I could perhaps return the favor and assist in setting up the infrastructure for collecting them. The samples would help my own research too.” Driven by a sense of both mission and curiosity, Matsuda no longer saw himself as just a research scientist, but also found himself at the center of efforts to develop BioBank Japan’s infrastructure, which had been in place since 2003.

BioBank is set up to collect blood samples from 12 medical institutions throughout Japan, targeting 51 different diseases. So far, it has collected the DNA of more than 230,000 individuals. State-of-the-art technology is used to store these precious blood serum samples and the DNA extracted from them, together with medical records and lifestyle data on the donors. BioBank provides this information to those researchers in Japan who have passed a stringent screening process (figure 1).

What genes can teach us about diseases

“Why do we get sick? As a scientist, I want to know the cause.” Thus motivated, Matsuda, working as a researcher, has used BioBank samples in his own studies, leading to such significant milestones as discovering the genes associated with duodenal ulcer, which occurs in the upper part of the small intestine, and cancer of the esophagus.

The method researchers like Matsuda employ is known as the genome-wide association study (GWAS), a comprehensive analysis of the entire genome. GWAS is based on the idea that multiple sections of the gene taken together are responsible for causing a disease—rather than a single location being the instigator. Researchers must check over 500,000 regions along the genome to identify the vast number of gene variations that may combine to make a person susceptible to a particular disease.

Both duodenal ulcer and stomach cancer are linked to infection by the bacteria Helicobacter pylori. Further research led Matsuda to point out a correlation between the incidence of the two diseases and variance in people’s genes; he suggested these genomic differences led individuals to produce proteins with dissimilar properties that affected their capability to repair and restore the mucous membrane of their intestines, and the capacity of their immune cells to fend off disease. He published his findings in February 2012 (figure 2). It was a major discovery that not only shed light on the mechanisms by which these diseases develop, but also pointed to information on which diseases and to what degree people should be concerned about contracting them.

Treatments in step with society

DNA is the “ultimate personal information,” containing the most intimate details about a person, capable of identifying an individual most conclusively; hence it posits significant ethical issues to institutions that handle such data. BioBank Japan came into being right at a time when personal information was emerging as a sensitive issue in Japan, and it takes this matter very seriously. BioBank’s Ethical, Legal and Social Issues (ELSI) Committee, composed of law and policy experts, engaged in heated debates at what seemed like every meeting. 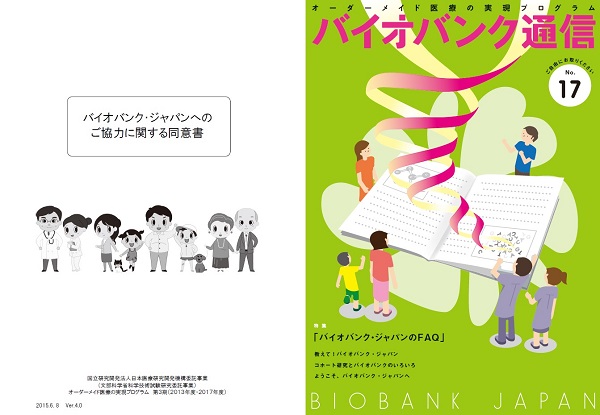 Figure 3: Left: an informed consent form, used to ascertain a patient’s willingness to cooperate with BioBank Japan; Right: an issue of the magazine BioBank Tsushin (BioBank Bulletin)
Medical coordinators at hospitals throughout Japan explain the personalized medicine goals of BioBank Japan and how patients can contribute, and obtain consent from donors. An annual publication, BioBank Tsushin provides sample donors and other contributors to the BioBank project with updates on recent achievements and current activities.
Credit: Tailor-made Medical Treatment Program.

Taking an active part in the discussions was Professor Kaori Muto of the Institute of Medical Science, specializing in the study of health care in society. “Perhaps people saw a potential threat to society in a worldview that advocated an all-encompassing analysis to achieve an ideal medical science,” notes Muto. It is a concern that has been raised not only about genomic research, but about any application of new methods that aims to reveal the deeper secrets of biological life.

Muto was originally an ELSI Committee member, but after taking a post at the University of Tokyo, she found herself in the position of providing internal support to BioBank Japan. There she took the initiative in developing informed consent forms, which verify the willingness of patients to allow their data to be used in research, as well as public outreach efforts via publications about the activities of BioBank (figure 3).

About 86 percent of all patients approached consent to providing samples and clinical data about themselves. Many are no doubt motivated by a desire to help reduce the number of sufferers from the same disease. Muto says that she wants donors to view their encounter with BioBank as “a joyful and memorable experience”—much like an ideal bank that provides its depositors with both interest and a sense of security, and at the same time contributing to the community’s economic development. For its part, BioBank Japan is also a place that brings researchers into contact with the expectations and goodwill of cooperating patients.

BioBank will celebrate its 15th anniversary in 2017. Professor Yoshinori Murakami, who serves as Dean of the Institute of Medical Science, avers that the work of adding to the bank’s vast store of biospecimens must continue on a large scale and unabated for years to come if disease prevention and treatment tailor-made to the individual patient’s constitution are to become a reality (figure 4). So, what sort of future does Murakami envision if BioBank Japan’s goal of personalized medicine is realized?

“A society in which everyone can live a reasonably long and healthy life, no matter what physical constitution they are born with,” says Murakami. “There’s the proverb: ‘A creaking door hangs the longest,’ suggesting that those who carry an illness live longer because they are more careful about their health. Whereas in the past we coped with a single illness, the day will come when we can coexist with 10 illnesses, and not only live longer, but also enjoy a higher quality of life.” He goes on: “These days we are obsessed with individual differences. If we can enjoy longer lifespans regardless of differences in constitution, and whether or not we have disorders and disabilities, it should change how society views such differences, so that they are treated as just another aspect of our individuality. That is the sort of medical care we hope to provide.”

Figure 4: Personalized medicine, the goal of the BioBank project
“Tailor-made” treatment based on genetic information about the patient will make it possible to implement optimal disease-prevention strategies and medical care for each individual. The ultimate aim is a society where people can live long, healthy lives whatever physical constitution they were born with.
© 2016 The University of Tokyo.

Many issues, of course, remain to be resolved, from the technological advances that will make this dream come true to the participation of society at large.

Muto considers it her mission to integrate the new technology with society. “My job is to study and think about what is needed to utilize personalized medicine appropriately and effectively,” she says. She aims to get society more engaged on both the legal and policy fronts if we are to prevent discriminatory or malicious misuse of our growing knowledge of genes and genomes, and apply it toward the greater good.

Also needed is development of the technological means to apply preventive strategies, treatments, and drugs tailored to individuals with different genetic makeups. New drugs will have to be developed, too. There are still a number of time-consuming processes to take up, but at the same time the path ahead has become clear.

Taking a big-picture view of the core issues facing BioBank Japan, Matsuda muses, “How do we make our newfound knowledge useful for actual treatment? We have to figure out how to convert discoveries into applications.” His own role, he goes on, “is to provide the requisite infrastructure to facilitate the ‘discovery’ phase of the process. But however long it takes, personalized medicine is destined to become an everyday part of our lives.” Wearing two hats—that of a researcher and that of a BioBank Japan administrator—Matsuda is convinced that the steadfast course of his labors ultimately will lead to help create the advanced society of the future.