A petrochemical complex in the palm of your hand 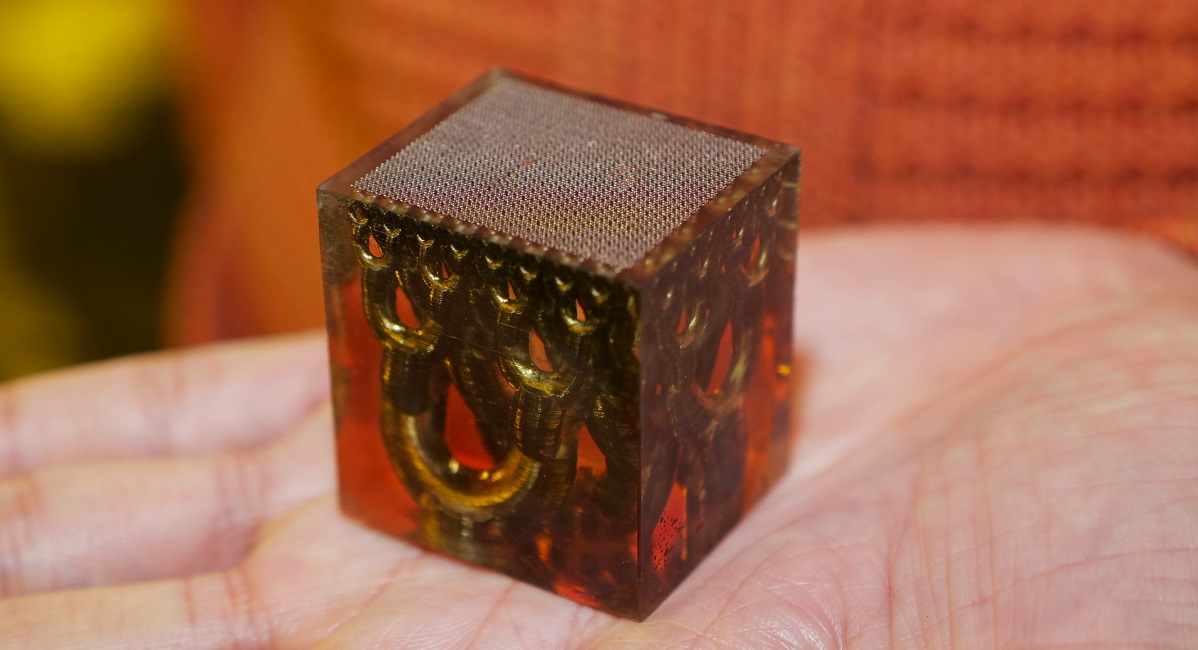 A “micro flow path” is formed with the photocurable resin-type 3D printer RECILS. The microreactor was in fact created inside the 4-centimeter cube by splitting two inlets into two branches, each repeated 11 times until there were 4,096 outlets.

We are not usually conscious of the industrial products that make our daily lives possible. Practically everything surrounding us, from desks to PCs to ballpoint pens, are products of industry. These cheap manufactured products have without doubt enriched our lives quantitatively. “However, in an age where there are calls for diversity from all sides, it may be time to re-examine the economic system of mass production and mass consumption that has produced standardized goods ever since the Industrial Revolution,” said Professor Junji Yumoto.

For example, metal pressing, which has until now made mass production possible, can be replaced by lasers’ cutting capability. Instead of cutting steel plate with a specially crafted die, a laser can freely cut any shape. Lasers can be computer controlled, so designs are not limited to one die, but each product can be individually designed. 3D printers use lasers’ capability to melt and harden material. This can replace injection molds, and using a computer-aided design program, products can be made one by one.

This is where RECILS, the photocurable resin-type printer developed by Yumoto’s group, comes in. Resin is built up layer by layer using a rotating cylinder. This circumvents the need when using existing 3D printing techniques to remove the product from a base that results in distortion and improves molding accuracy to the micron level.

The object in the photo at top is a cube, with each of its edges measuring 4 centimeters, created by splitting two pipes in two repeatedly and doubling their number 11 times — into four, eight, 16 and so on — until there are 4,096 pipes. This “micro flow path” can be used for the preparation and reaction of various materials and chemicals. It is even possible to create a petrochemical complex made up of thousands of pipes and tanks that fits in the palm of your hand.

With laser manufacturing technology able to create a whole chemical plant, we could be at the start of a whole new industrial revolution.