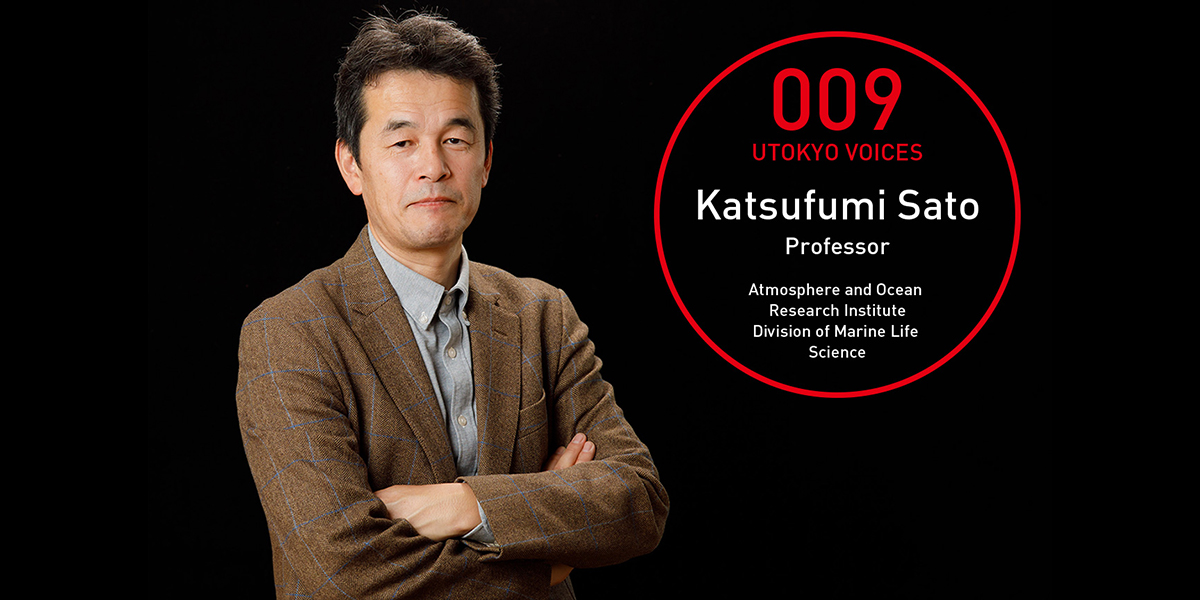 The oceans are filled with mysteries.

Twenty-five years ago, compared to what was known about land animals, the ecology of many aquatic animals was virtually unknown. Bio-logging using a small recorder, called a data logger, was the solution scientists came up with to address this. Attaching data loggers to animals contributes not only to revealing the behavior, physiology, and ecology of aquatic animals but is also used to contribute to meteorological research on a global scale.

Sato’s interest in bio-logging was triggered when he read Tsurikichi Sanpei (Fishing Enthusiast Sanpei), a Japanese manga, as a child. Beginner’s luck on his first fishing trip resulted in his catching a bigger fish than his father did, and fishing became a fun and absorbing pastime for him. Although Sato was keen on soccer while a junior and senior high school student, he still found time to read all 65 volumes of Tsurikichi Sanpei and harbored a desire to find a job that would let him fish. He enrolled in the Faculty of Agriculture’s Department of Fisheries at Kyoto University. Sato grew up in Kanagawa Prefecture, and recalls that “One of the reasons I chose Kyoto University was because I wanted to move away from my parents.”

“In those days, micro research using biotechnology was catching on, and I found myself in a minority of people involved in macro research on whole animals.” During his time at university, Sato loved soccer, which strengthened him physically and mentally, and he never imagined becoming a researcher. For his graduation research project, Sato used a data logger to research sea turtles, and it was this project that put him on the path to becoming a researcher. Sato encountered a series of hurdles, such as loggers falling off turtles and turtles not returning, that prevented him from obtaining data. So, rather than leave his research unfinished, he decided to continue it at graduate school.

In his second year at graduate school, he obtained results that flew in the face of the received wisdom of the day and led to his becoming more and more interested in bio-logging. “Sea turtles are classified as reptiles, so they should be cold-blooded animals, but analysis of the data I obtained led to my discovering that the temperature in sea turtles’ stomachs does not change.” Ultimately, Sato discovered that “turtles are large objects which, in terms of physics, do not readily cool, and this became my doctoral dissertation topic.”

The hottest research topic now is a behavioral study that attaches a flight recorder developed by JAXA to the backs of birds and records in detail data such as their direction, altitude, speed, acceleration and temperature. “One student hit on the idea of measuring wind speed, wind direction and temperature using a flight recorder attached to a bird, and we discovered that we could also use it for metrological data to fill the gaps in satellite observations.” Bio-logging started as a means of studying animal ecology and evolved into a revolutionary device for meteorologists. In December 2016, Sato started working with meteorologists on a major project using data from bio-logging. “We know that wind information estimated using birds can be quite reliable. We will achieve a massive breakthrough if we can increase the accuracy of weather forecasts using data from birds.”

“The word ‘bio-logging’ now appears in junior high school textbooks for Japanese language study. It makes me very happy when I think that each year, hundreds of thousands of children will read the text and get a sense of the possibilities of bio-logging.” Bio-logging is telling us ever more about the ecology of many species of wild animals. “I want us to understand wild animals, not in a vague way but as important species with which we share this planet.”

It is Sato’s hope that “not only will research results produced using bio-logging become the new normal, but that more and more people will experience the fascination of bio-logging as a research means.” 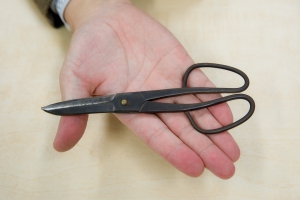 All of Sato’s materials at his laboratory in Otsuchi in Iwate Prefecture were lost in the tsunami that followed the Great East Japan Earthquake, except for this pair of scissors, “Tanegashima,” once used by his grandfather, which he found among the debris. These scissors are over 100 years old and have survived both the air raids on Nagaoka, Niigata Prefecture, in 1945 and the tsunami in March 2011. Sato still uses them to open envelopes. 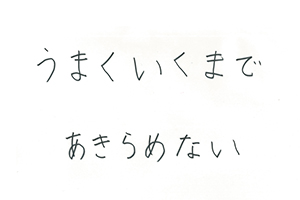 Sato offers the following message of support: “While most research does not go as planned, repeated trial and error will eventually result in things going well. Bio-logging is a fascinating field that I strongly encourage you to get involved in.” [Text: Umaku iku made akiramenai (“Keep trying until it works”).]

Katsufumi Sato
Graduated from Fisheries Department, Faculty of Agriculture, Kyoto University in 1990; completed Master's in fisheries at Graduate School of Agriculture, Kyoto University in 1992; received Ph.D. (Doctor of Agriculture) from Division of Fisheries, Graduate School of Agriculture, Kyoto University in 1995. After a stint as a special researcher at the Japan Society for the Promotion of Science (National Institute of Polar Research), took up a position as an assistant at the National Institute of Polar Research in 1997. Appointed as an associate professor at the International Coastal Research Center, Atmosphere and Ocean Research Institute, University of Tokyo in March 2004, and as a professor of behavioral ecology measurement at the Institute in 2014. Author of Sabori Jozuna Dobutsutachi (Animals Skilled at Procrastinating) (Iwanami Kagaku Library), and Penguin mo Kujira mo Byosoku 2 Meter de Oyogu—Hai-tech Kaiyo Dobutsugaku e no Shotai (Penguins and Whales Swim at a Speed of 2 Meters per Second—Invitation to High-Tech Marine Zoology) (Kobunsha Shinsho).