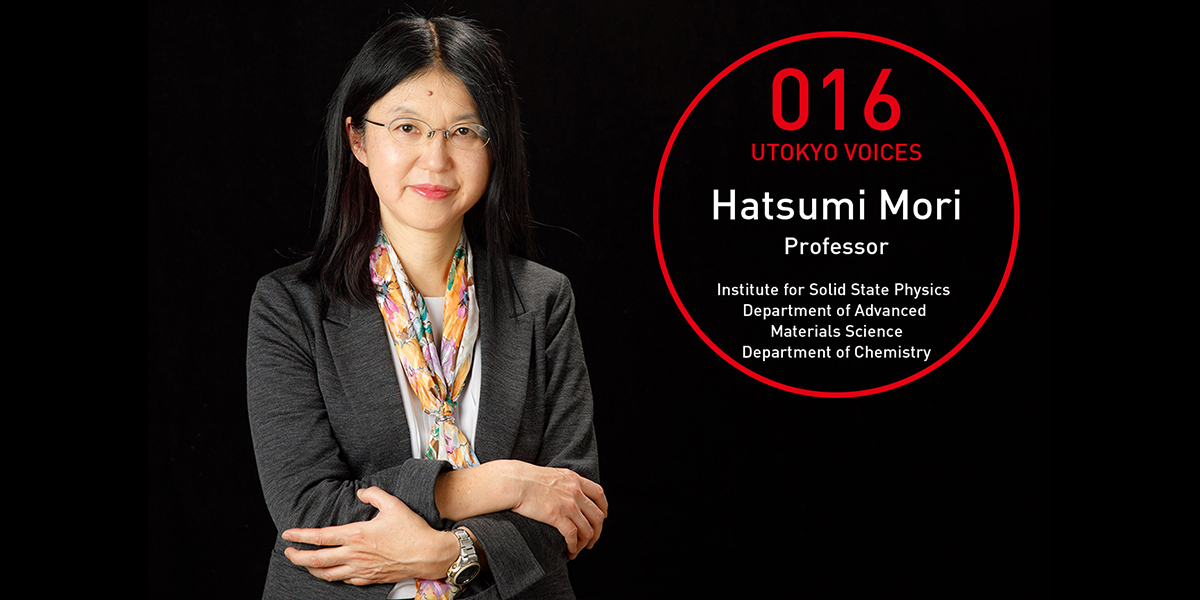 When trace amounts of chrome are added to clear alumina it transitions to red ruby, and when trace amounts of titanium and iron are added it transitions to blue sapphire. When Mori asked her high school teachers why, she was told that “she can learn about inorganic chemistry at university.” Attracted by such color changes, Mori decided that she wanted to “find out about the origin of functional matter such as gems” and enrolled in the Faculty of Science at Ochanomizu University.

In her fourth year, Mori joined Yusei Maruyama’s research laboratory, which was engaged in research into organic semiconductors. “For my thesis, the topic of developing new intramolecular polarization complexes aiming for room temperature superconductivity (which is still a dream for the future) was somewhat randomly thrown my way, with Professor Maruyama suggesting that I might find it interesting.” Her goal was to create superconductors from organic matter using the properties of a semiconducting organic dye.

Mori recalls that, “my research finally started to produce results in the fall of the second year of my Master's. This taught me that research is about making dreams come true.” Mori went on to pursue her thesis theme for her doctorate. A graduate student at Ochanomizu University, Mori studied as a visiting student under Professor Maruyama who had transferred to the Institute for Molecular Science, and threw herself into research into the synthetic and physical properties of organic materials that conduct electricity just like inorganic copper wire. She says that she got a real feel at this time for just how interesting research can be.

After completing her Master’s, Mori got a job offer but Gunji Saito, her joint researcher, asked her to work as a technical associate; so, she took and passed the civil service examination and started working at the Institute for Solid State Physics at the University of Tokyo. “I studied for my Ph.D. while working and discovered substances that were organic superconductors at temperatures above 10 Kelvin (on the absolute thermodynamic temperature scale, or -263.15 Celsius).” This led to Mori becoming the only female professor in the 60 years since the Institute for Solid State Physics was established.

Diversity in the form of interaction with people of various nationalities, genders, and values lies behind Mori’s research results. In Mori’s third year as an undergraduate student, her parents went to the US on a work transfer, and Mori spent a year as a third-year student at the State University of New Jersey, where she lived in a dormitory and studied together with exchange students of various nationalities, enjoying the diversity and experiencing both opportunities and difficulties.

There are not many female researchers in Japan, and less than 6% of the members of the Physical Society of Japan are female. Efforts are therefore being made to increase opportunities for women. A number of events such as “Mirai wo nozokou! (Peek into the Future!)” and “Yappari Butsuri ga Suki –Butsuri ni Susunda Joshigakusei/insei no Career (We Love Physics –The Career of Female Students and Graduate Students of Physics),” have taken place at the Kashiwa Campus aimed at female junior and senior high school students, and nursery schools have been opened at the University of Tokyo. Mori says that, “I got where I am today thanks to my seniors and colleagues.”

Mori considers both research and diversity to be her lifework. “Research is easier when conducted with others, but diversity is essential to achieve things no one has yet achieved.” Horizons widen when communicating patiently and engaging in lively exchanges of opinion, and the chance of discovering something new increases. In fact, Mori has been actively pursuing diversity, adding women and foreign visiting professors and researchers from different fields to her research team.

As well as human diversity, diversity in organic materials has also contributed to the high quality of Mori’s research results. There are over 100 elements, but combining just carbon, hydrogen, oxygen, and nitrogen atoms produces an infinite number of organic molecules. In other words, an idea can be taken and turned into a design for an organic molecule, which can then be synthesized. Organic matter is, in itself, diverse, and there are more and more fields for which useful organic materials can be synthesized.

Research into functional organic materials combines both basic and applied research. In this way, such research is capable of responding to social needs and can make an impact by creating a world of organic electronics that will replace silicon. Says Mori, “If you carry out research into something you hope for, nature will respond,” and her dream of creating functional organic materials and organic electronics seems to be coming ever closer to reality. 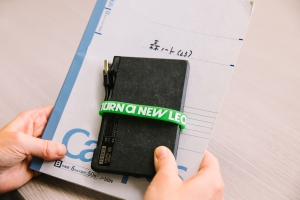 Mori’s notebook, which she uses to write ideas for developing room temperature superconducting materials from organic materials with infinite combinations, and this compact hard disc are the starting point and tools for making that dream a reality. The phrase “Turn a new leaf” is written on the band tied around the hard disc. 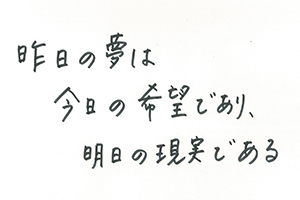 On a day-to-day basis, Mori practices the idea of “research making dreams a reality,” inspired by the words of Robert H. Goddard, the father of modern rocketry. [Text: Kino no yume wa kyo no kibo de ari, ashita no genjitsu de aru. (“Yesterday’s dream is today’s hope and tomorrow’s reality.”)] 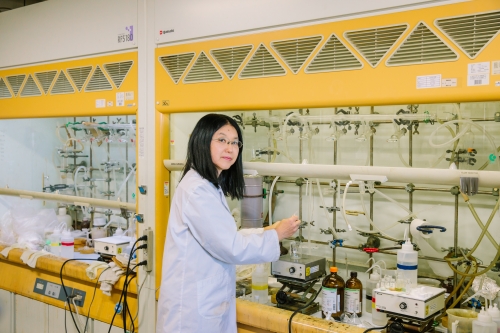 Hatsumi Mori
Graduated from the Department of Chemistry, Faculty of Science, Ochanomizu University in 1984 and completed master’s program in science at Graduate School, Ochanomizu University in 1986. Technical Associate, the Institute for Solid State Physics (ISSP), the University of Tokyo, Researcher, International Superconductivity Technology Center, appointed Associate Professor at ISSP in 2001, and appointed Professor at ISSP in April 2010 (current position). Awarded 2016 Ministry of Education, Culture, Sports, Science and Technology Minister Prize for Science and Technology (Research Category) for the field of science and technology (2016) and the FY 2017 (2018) Chemical Society of Japan (CSJ) Award for Creative Work (2018).