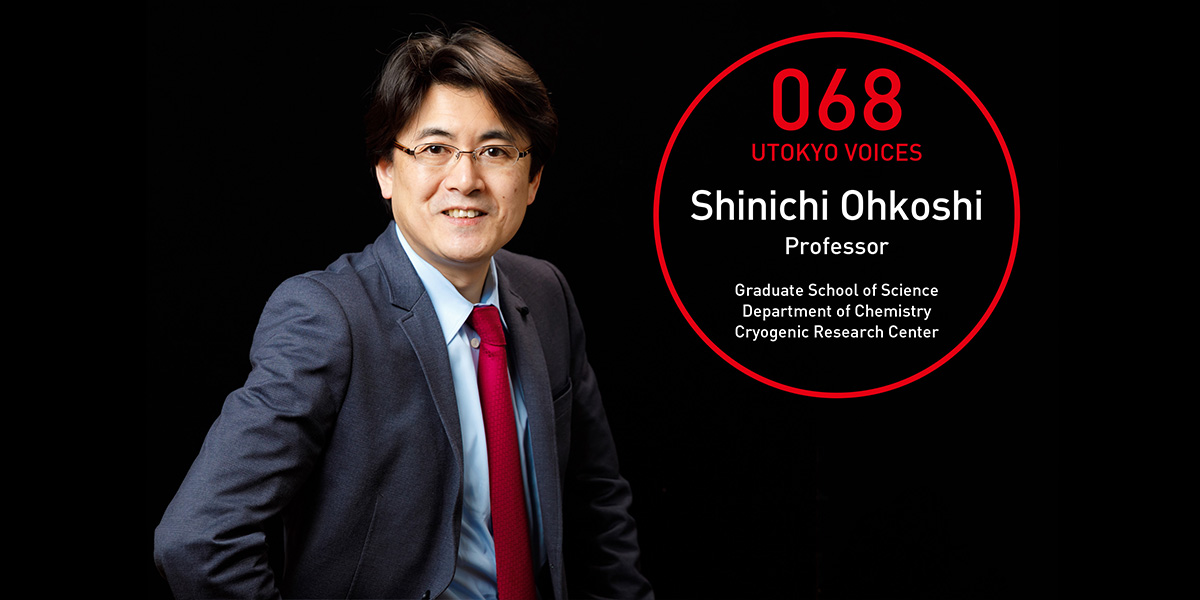 Professor Shinichi Ohkoshi is a “wizard” in the world of chemical synthesis who keeps on creating new materials that never existed before. His strengths were nurtured from a young age: cohesion of form and shape came from playing with building blocks; wide-ranging knowledge was gained by reading illustrated reference books of science and astronomy. In addition, Ohkoshi, gifted with a singular creativity, was captivated by chemical reactions.

“Once you start thinking about creating a new material with small environmental burden, using commonplace elements, with no adverse effects to the human body, and something that is useful to society — you begin to see the problems that need to be solved, and get a sense of direction. A good example is the magnetic tape we developed recently with a new magnetic ferrite, using epsilon iron oxide (ε-Fe2O3) composed of iron and oxygen elements. The tape has the world’s smallest and most powerful magnetic coercivity (magnetic stability in the face of interference).”

Up until now, the only recording media with a proven track record of data storage of more than 50 years was magnetic tape. As we adapt to the world of the “100-year life span,” we are likely to see problems arising from the loss of stored data, for example in fields such as insurance. So there is a growing demand for a new recording media for reliable long-term data storage.

Furthermore, we are rushing into the era of big-data transmission. With the advent of the next generation of mobile internet connectivity (5G networks) and millimeter wave technology used in car radars, we need to find an electromagnetic wave absorber that can prevent electromagnetic interference and absorb waves outside a specific range. However, there are almost no materials that can selectively absorb millimeter waves of 80GHz and over. Thus, there are concerns that electromagnetic interference may occur in this bandwidth.

“Epsilon iron oxide not only allows for long-term big data storage, but it serves another role. It is a highly efficient millimeter wave absorber. We hope to see the material being used for other purposes besides a recording medium. We have already submitted multiple patent applications in preparation for commercialization. Since this is something that never existed before, we are getting the go ahead for lots of method-of-use usage patents. Things are going swimmingly! (Laughs). So far, we have submitted more than 140 applications and more than half have been accepted. We are aiming for production in five to ten years.”

Ohkoshi was the first in the world to create another novel material from oxygen and titanium. Lambda-trititanium-pentoxide is a material that releases stored heat energy upon application of pressure, and returns back to normal when heated. It is a new material for storing heat for a prolonged period, based on a completely unique concept. It requires no electricity, but stores discarded heat, which can be recovered on demand. The new material can be used to recycle industrial heat waste, heat energy from power plants, and heat waste from automobiles. It will be an efficient way to recycle energy. Implementation is eagerly awaited.

These results could never have been achieved by sticking to one novel field or to his own specialty. Ohkoshi combines organic and inorganic chemistry, physical chemistry, research on magnetism, and photochemistry among others. Using his collective strengths, Ohkoshi says, “I create new magnets, magnetic materials and ceramics that no one has seen before.”

“What makes research so fun, is that you can make your dreams come true. In order to make something that no one has ever even thought of, you bring all your basic knowledge and make use of every methodology that is out there. It’s an exciting process. In the corporate world, when you are working towards a goal, there will be restrictions such as cutting costs and developing new markets. But in academia you are given a free hand in research. And I think that is wonderful.”

“My ideas can entertain people, and make them happy. Their smiles become my motivation. That’s why I am so eager to show off my stuff!” says Ohkoshi, with a laugh. This trailblazer in the world of chemical synthesis is bound to keep on challenging himself to create new things that no one in the world has ever thought of. 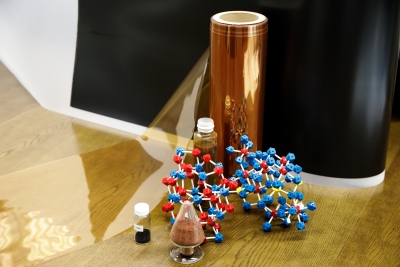 Project to product
A powder sample of a newly developed material, a crystal structure model, and ink and film made from the new material. Building on an inspiration, using unconventional methods no one else can come up with, Ohkoshi has been creating new materials that tie in directly with our society. His recent discovery, epsilon iron oxide (ε-Fe2O3), in the foreground, was on display at the Science Museum in the U.K. 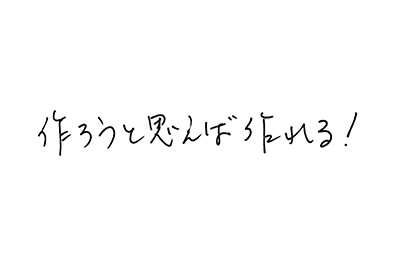 [Text: “Tsukuro to omoeba tsukureru!” (If you think you can make it, you can make it!)]
“I don’t start by thinking how something could be used. It begins with, wouldn’t it be nice if I could come up with something that we don’t have yet. Then I fiddle around using a model, trial-and-error style, and bring it to realization using every kind of methodology available.” 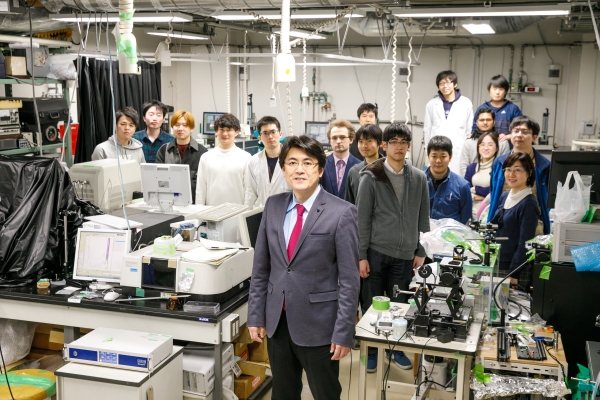 Received his Ph.D. from the Graduate School of Science, Tohoku University in 1995, and became researcher at Kanagawa Academy of Science and Technology. Became research associate at the University of Tokyo Research Center for Advanced Science and Technology in 1997, was promoted to lecturer in 2000, associate professor in 2003. After becoming associate professor, Department of Applied Chemistry, Graduate School of Engineering, the University of Tokyo in 2004, became professor in the Department of Chemistry, Graduate School of Science, the University of Tokyo. In 2017, became councilor, UTokyo Education and Research Council, became director, CNRS Joint Research Unit, International Associated Laboratory “IM-LED (Impacting Materials with Light and Electric Fields and Watching Real Time Dynamics)”, became director at the Cryogenic Research Center, and vice dean, the Graduate School of Science. Is the recipient of the Japan Academy Medal, Japan Society for the Promotion of Science (JSPS) Prize, IBM Japan Science Prize, the Ichimura Prize in Science, the Inoue Prize for Science, the Mukai Award, and the Chemical Society of Japan Award, among others.