The Division for Strategic Public Relations has published a magazine titled Future Society Initiative: Society 5.0 and the University of Tokyo. The magazine highlights some of the research projects at UTokyo registered under the university’s Future Society Initiative (FSI), a framework to bring together ongoing research projects that contribute to the United Nations Sustainable Development Goals (SDGs). The following article, an expansion of that in the magazine, takes an in-depth look at one researcher who is actively tackling challenges related to health and wellbeing. 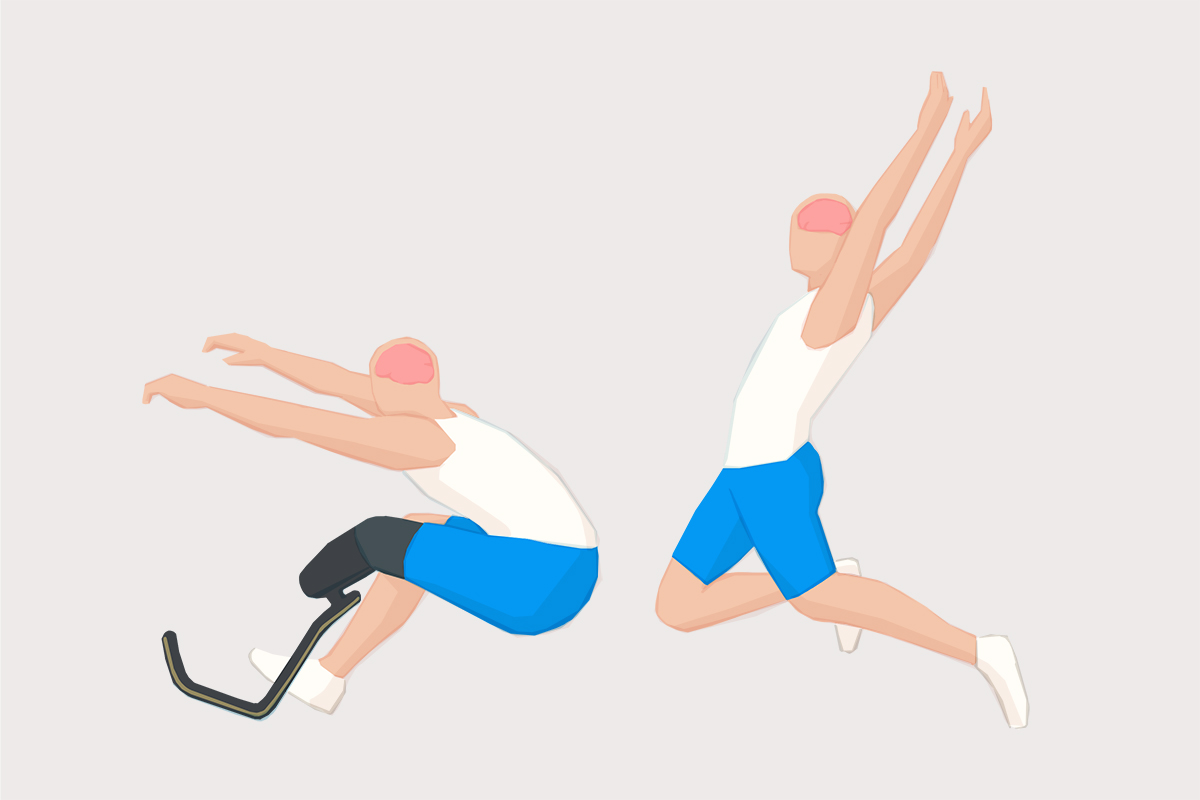 Graduate School of Arts and Sciences Professor Kimitaka Nakazawa leads a research project to develop physical training or rehabilitation techniques informed by the neurology of Paralympians and other athletes with physical differences. © 2018 The University of Tokyo.

Professor Kimitaka Nakazawa built a career studying neurological rehabilitation after spinal cord injury. He had long been interested in sports physiology and when he moved to the University of Tokyo in 2009, he had the academic freedom to add studies of dancers and baseball pitchers to his research. It wasn't until a chance encounter with a documentary film crew in 2016, though, that he began a new project to understand the brains of Paralympic athletes. Nakazawa is now finding new rehabilitation and sports training methods that are relevant to everyone.

An American swimmer, decorated with eight Paralympic medals, was the subject of a television special by the Japanese public broadcaster, NHK, in 2016. The right side of the swimmer’s body is weak with limited movement due to a stroke at birth, a condition known as cerebral palsy. When doctors and researchers took pictures of the swimmer's brain as part of the television special, they saw unexpected patterns of activity. The television crew had asked Nakazawa to participate in the broadcast as an expert.

"We were shocked when we saw that data," said Nakazawa.

After Nakazawa was finished with the documentary, he sought out other Paralympians to observe how the brain and body adapt to neurological injuries or amputations. To date, he has worked with five other Paralympians: two Japanese and one German track and field athletes, all of whom are missing part of one leg due to injury, an American archer who was born without arms, and a Japanese bench press weightlifter who is paralyzed below the chest.

Nakazawa and his collaborators are just beginning to publish their first peer-reviewed academic papers to announce their findings to the scientific community. Their results come from small sample sizes and limited testing, but are promising and have inspired multiple follow-up studies.

"So far, I can give a very positive message to injured or elderly people. The human brain has huge potential to change with physical training or rehabilitation, or even just playing sports," said Nakazawa.

The body in your brain 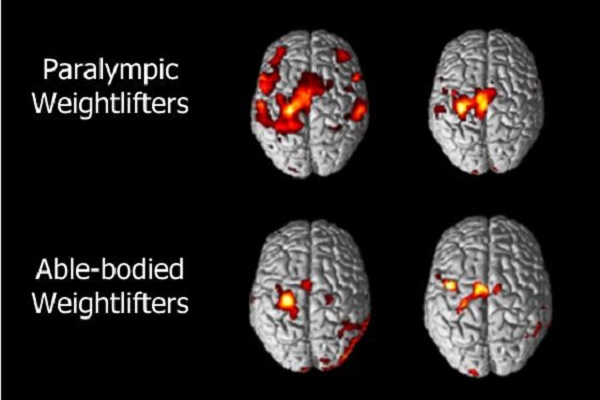 The textbook model of motor control is depicted as distinct groups of nerves within a brain region called the primary motor cortex. Body parts with fine motor skills, like the face or hands, are controlled by more nerves than areas for gross motor skills consisting of bigger movements, like the chest or thighs. Until now, many scientists thought only one side of the brain controlled one side of the body, what researchers call unilateral brain activation: that is, the left half of the brain controls the right side of the body, and vice versa.

The textbooks, however, never included data from para-athletes. When Nakazawa and his collaborators ask Paralympians to move unimpaired areas of their body, they see expected patterns of activity in the expected parts of the brain. The unexpected surprise for researchers comes when Paralympians with unilateral injuries – paralysis of one side of the body or an amputated leg – move the injured body part: Both sides of their brain light up with activity, indicating bilateral brain activation.

"It’s as if the brain has reorganized itself to exert more control over the parts of the body that remain after the injury," explained Nakazawa.

The swimmer with cerebral palsy has an area of her brain that appears black – completely without activity – on functional magnetic resonance imaging (fMRI) studies, a type of brain scan that measures neurological activity by monitoring changes in blood flow. Other areas of her brain, far beyond the expected boundaries of the primary motor cortex, have reorganized and are active. These fMRI images revealed that the human brain can compensate for damanged regions.

The archer provided an opportunity to test a different condition: missing body parts. Nakazawa gave a fine motor skills test to the American archer without arms, in which colored pegs about the size of a pen cap are taken out of a pile and put into holes on a board. The archer completed the task with his toes.

"He has a competitive spirit, so he made the test harder by sorting the pegs by color and then completed the entire task in less than one minute," said Nakazawa.

Areas of the brain usually dedicated to controlling only the hands or feet are both activated when the archer uses his toes.

"The brain reorganizes itself to suit the body," said Nakazawa.

Increased neurological control over remaining body parts is something that Nakazawa is also exploring with people who use wheelchairs.

When Paralympic bench press weightlifters were in the lab, the research team asked them to clench a fist and control the strength of their hand muscle contraction at specific intensities. Subsequently, researchers did the same test with able-bodied weightlifters and non-weightlifters, as well as wheelchair users who weightlift and those who do not. Nakazawa's research team discovered that all wheelchair users could clench a fist with nearly perfect fine-tuned control of muscle strength. The muscle contractions of people without spinal cord injuries wavered above and below the target intensity with more deviations than wheelchair users.

"I like this result very much. Perhaps without needing to control the legs after a spinal cord injury, a larger portion of the brain is free for more specific control of the arms," said Nakazawa.

The plastic brain: adapting to a new body

All of these preliminary results from small case studies indicate that regardless of the physical differences – cerebral palsy at birth, being born without limbs, amputation, or spinal cord injury – the brain can adapt to achieve optimum control of the body. Researchers hope that the information provided by the para-athletes will lead to new rehabilitation or sports training techniques to improve the physical condition of all people, whether they aspire to sit up independently or win a gold medal.

"We want to know, how can we increase the brain’s potential for reorganization? We are looking at many unique cases to find universal knowledge we can apply to the future of rehabilitation science," said Nakazawa.

The future Nakazawa envisions is one that combines rehabilitation and regenerative medicine to provide patients the most comprehensive and the quickest recovery from an injury.

The difficulties of studying Paralympic neurology and motor control are not only funding constraints, which are common in science, but also the unique challenges of recruiting Paralympians to come into his lab on the university’s Komaba Campus. Nakazawa is hopeful that the 2020 Tokyo Paralympic Games will create additional research opportunities to better understand the Paralympic brain.

Nakazawa’s lab is within the Graduate School of Arts and Sciences and he is also a member of the University of Tokyo Sports Science Initiative, which promotes cross-disciplinary research in sports and health sciences. A total of 30 research associates, students, and administrative staff support the team’s scientific endeavors, including collaborators in the U.S. and Australia.