The year 2021 marks the start of the United Nations Decade of Ocean Science for Sustainable Development, a major campaign to advance the science of the ocean, which is the birthplace of all life and sustains the lives of organisms on Earth. This year, the University of Tokyo welcomed as its new president a scientist who has lived and worked with the ocean. From engineering, physics and biology to agriculture, law and economics, we introduce UTokyo’s ocean research and marine education activities as illustrated by examples from various fields.

At the Center for Ocean Literacy and Education (COLE), experts in the fields of pedagogy and oceanography have joined forces to develop and promote the spread of an ocean and marine education curriculum in school-based education at the elementary and junior high school level. The director of COLE, who has taken the lead in this initiative for the past twelve years, offers an overview of Center’s activities as well as some of his reflections.

In 2010, the Research Center for Marine Education was established as part of the Ocean Alliance to promote the creation of a network to link the frontlines of ocean and marine education practice. This was the forerunner to the Center for Ocean Literacy and Education (COLE), which was incorporated into the Graduate School of Education in 2019.

The sea was once thought to be a processing apparatus with unlimited capacity, but this has proved to be incorrect. The sea’s absorption of the heat of an atmosphere warmed by greenhouse gases results in an increase in typhoons and tropical cyclones, and leads to droughts and desertification in inland areas. Warming is a problem that pertains more to the sea than to the atmosphere. This problem is not simply a science issue, nor is it exclusive to social studies or moral education.

Japan has a system known as “specialized curriculum schooling” (kyoiku katei tokureiko) that allows for the creation of unique syllabi that can go beyond the education ministry’s curriculum guidelines. We have called on specialized curriculum schools across Japan to implement a full-year curriculum making use of the sea. Examples might include reading novels about the sea in Japanese class, studying impacts on the fishing industry in social studies, thinking about climate mechanisms in science class, and learning songs about the sea in music class. By positioning the sea as a core, with each subject on the periphery, the sea would act as an integrating theme to cut across the vertical boundaries of basic school-based education. At present, forty schools throughout Japan are implementing this curriculum, focusing mainly on schools close to the ocean, in places like Okinawa and Kesennuma (Miyagi Prefecture).
The National Ocean and Marine Education Summit is an annual event that has now been held eight times. Students and teachers from schools showing enthusiasm for ocean and marine education, including but not limited to those from specialized curriculum schools, are invited to hang posters describing the details of their research in the corridors of Yasuda Auditorium, after which the students give presentations. The event draws around 800 participants each year. Local versions of the event have been similarly held in Omuta in Fukuoka Prefecture and Kesennuma and Hirono in the Tohoku region.

We have also been focusing on our publishing projects, which involve the creation of textbooks, supplementary readers and teaching materials designed for instructors. We make sample content that helps instructors create materials that focus on local characteristics, such as by having instructors use the samples as a reference to create similar content that includes local marine life. In recent years, we also have been actively developing video teaching materials for the general public.

The Center also has a large part to play in shaping the philosophy of ocean and marine education. The goal of ocean and marine education is not to transmit knowledge of the ocean, but to shape human beings through ocean literacy. So what sort of human qualities should we be nurturing? Since the advent of modernity, the idea that humanity controls nature has become stronger, but on the other hand, we can also conceive of human beings as living by virtue of the blessings they receive from nature in the form of the sea. I would like to revitalize this Japanese view of nature, so to speak.

Key words in this context are “matrix” and “habitability.” The sea is the womb of all life, and a foundation for its survival. A reality that we have to acknowledge is that, in forgetting these two points, as human beings we have plunged ourselves into a crisis. We need to conceive of the sea as something with which to live together, rather than as an object to be manipulated. Caring for and valuing people and caring for and valuing the sea are inextricable in the context of education.

Some may argue that human beings are harmful to the global environment, but it is certain that we also have a vector that transcends the ego to approach the sublime. The idea that human beings are evil is only conceivable because humans have a side that is not evil. I feel that we have no choice but to continue our activities in the belief that despite this ambivalence, we will gradually head in the right direction.

Photos from the 7th National Ocean and Marine Education Summit, held in February 2020 on the theme of Climate Change and Ocean Literacy. In the poster session, the top award was won by Nakano Elementary School in Hirono, a town in Iwate Prefecture. 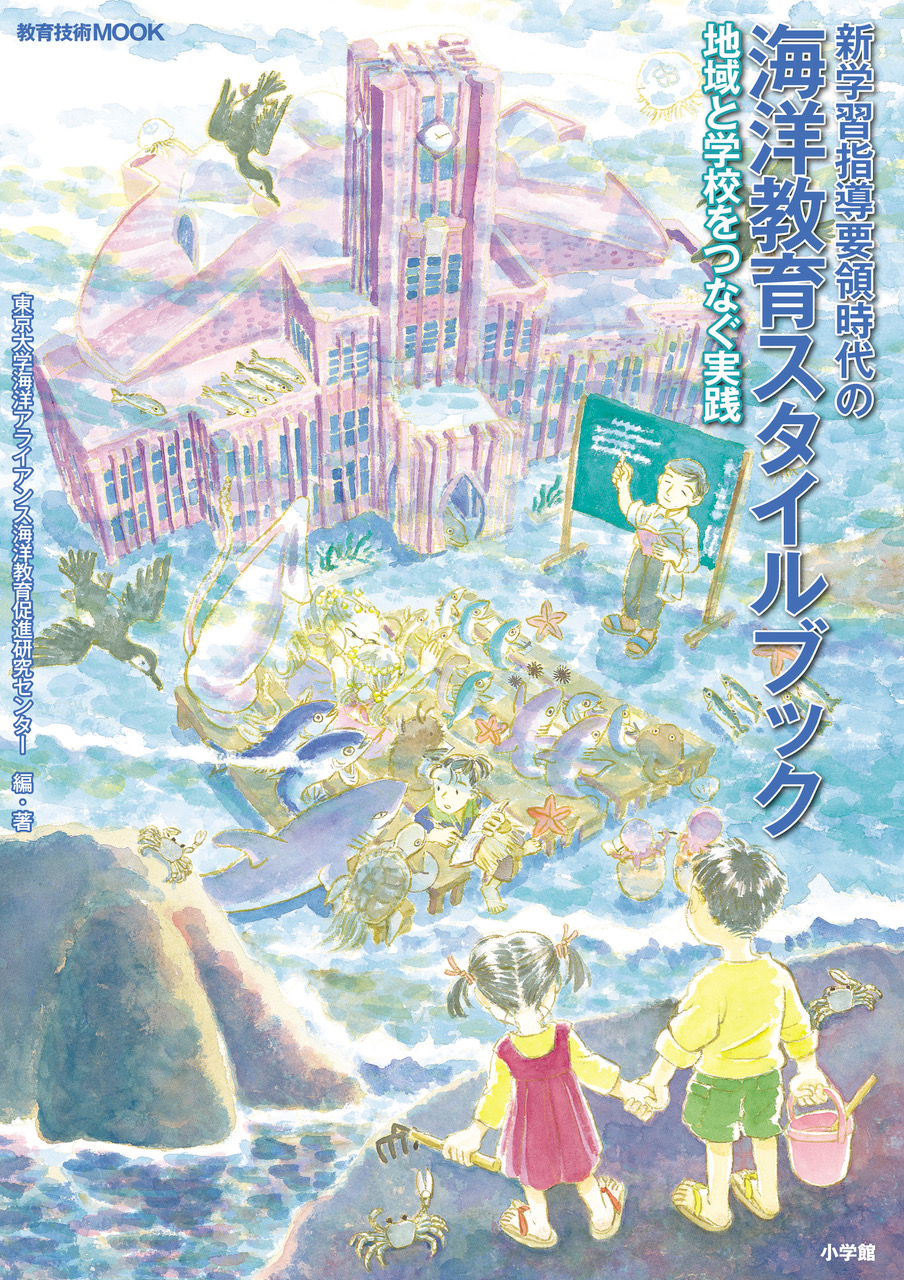 This book introduces a variety of practices implemented for ocean education, and seeks to present a model of ocean education through a panoramic view of these cases. The educational practices presented in this book have been implemented in kindergarten schools, elementary schools, and junior high sc...[Read more]