The University of Tokyo and IBM signed an agreement in December 2019 to promote an industry-academia partnership to make Japan a leader in quantum computing. Based on the Japan-IBM Quantum Partnership, UTokyo and the technology giant launched the IBM-UTokyo Laboratory in June 2020 to carry out their goals.

From the development of novel drugs and new materials, to the creation of financial models and optimization of supply chains, quantum computers, which excel at calculating equations containing many complex combinations, are expected to play a key role in the future of an advanced information-oriented society.

UTokyo has been in the forefront to implement quantum computing and other quantum technology applications in society. Through the establishment of the IBM-UTokyo Lab, three projects are getting into full swing.

The first is a project involving the world's first gate-model commercial quantum computer called IBM Q System One. Through an agreement signed by UTokyo, IBM and the city of Kawasaki, Kanagawa Prefecture, the leading-edge quantum machine will be installed in the city, south of Tokyo, with the aim of giving companies and universities access to utilize the computer. It is the first installation of this type of quantum computer in Japan, and only the third in the world following the United States and Germany.

“There are several types of quantum computers. The quantum gate-based type that operates with superconducting circuits in ultralow temperatures is considered as the mainstream of universal quantum computers, which aren’t tailored for specific applications,” said Professor Masashi Kawasaki, director of IBM-UTokyo Lab. “System One became the first quantum computer using this method to be commercialized.”

Quantum computing used to be the domain of a limited number of researchers. But in 2016, IBM made cloud-based access to its quantum systems available, paving the way for commercial quantum computers. Since then, the computers’ performance, indicated in units called qubits, has scaled up from 5 qubits to 53 qubits. UTokyo holds exclusive access rights to use the IBM machine, which will be installed in Kawasaki city in July 2021.

“Consortium members can conduct joint research using System One,” Kawasaki said. “Currently, there are 14 particpants, from the fields of finance, chemistry, electronics, information and energy. I believe expanding this circle will directly lead to advance quantum computing in Japan.”

The second project is the operation of a hardware test center. In order to operate gate-based quantum computers, it is essential to have hardware technology for cryogenic and microwave components, materials for stable operation of superconducting qubits, high-frequency parts and wiring for signal transmission, and control technologies for refrigerators and compressors. In June 2021, a highly stable 5-qubit test machine was installed at the test center set up in the Asano section of UTokyo’s Hongo Campus.

This is the first time IBM, which exercises strict control over its emergent technology, has set up a quantum computer test bed outside the company.

“How to input data into a quantum computer poses a big question,” said Professor Hiroshi Imai, who studies quantum computation and algorithms at the Graduate School of Information Science and Technology. “If we can enter data in a quantum fashion, it would be a breakthrough. And this test bed could make that possible.”

According to Imai, there have been several quantum computing-related breakthroughs in the 1990s. One of the most significant is the invention of the superconducting quantum gate method — the technology IBM has adopted — dreamed up by Professor Yasunobu Nakamura of the Research Center for Advanced Science and Technology in 1999, when he worked at the electronics and information technology company NEC. It is IBM’s custom to name its processors after birds, and they named the one at the test center Tsuru (Crane), long considered a symbol of longevity and good luck in Japan — and perhaps as a way to show respect to the Japanese researcher.

The third project in progress is the QII Research Center for industry-academia joint research being built on the Hongo Campus. IBM engineers will be stationed at the 100-square-meter collaboration facility being built on the 10th floor of the Faculty of Science Building 1’s west wing. They are expected to work with UTokyo researchers as well as QII member companies to develop the software, algorithms and applications necessary to accelerate the performance of System One. The center is currently aiming to start operations by mid-August.

“We’ve held 10 seminars so far,” said lab director Kawasaki. He continued, enthusiastically: “One of the main purposes of QII is to deepen ties among its members. We will build an ecosystem for quantum computing in Japan by bringing together technologies from industry, government and academia.” 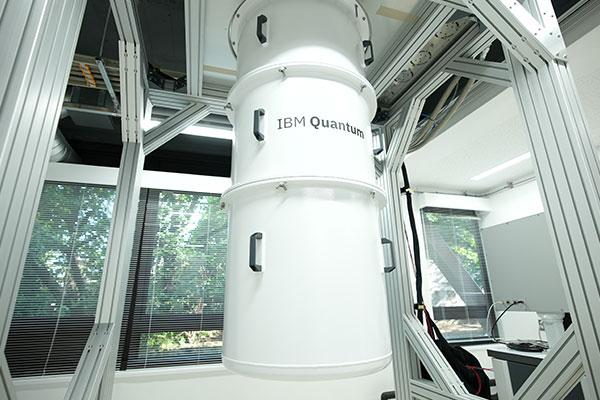 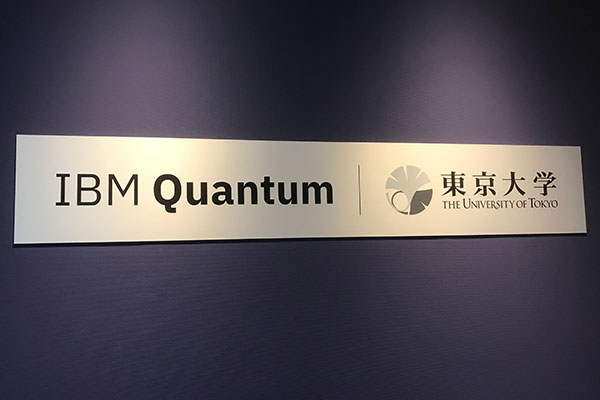 The quantum computer test bed installed at the University of Tokyo-IBM Quantum Hardware Test Center on the Asano section of UTokyo’s Hongo Campus.

“All at once” rather than “one by one”

We’ve so far described the IBM-UTokyo Lab’s ongoing projects, but what is a quantum computer, in the first place?

Quantum computers are characterized as having properties of both particles and waves; their ability to perform calculations by utilizing the quantum attribute of being able to represent multiple states at the same time far surpasses that of classical computers.

“Simply put, it is the ability to calculate scores of combinations at once, rather than one by one” that makes this kind of computer exceptional, explained Kawasaki. For example, take a sphere, which contains a myriad of similar line segments that are the length of the radius. Conventional computers would have to identify each line segment and calculate them one by one. But with a quantum computer, all possible combinations can be calculated at once without specifying the position of each line.

Quantum computers, however, are not set to replace all conventional computers. With current technologies, quantum computers inevitably generate “noise,” creating the additional task of correcting errors. There are also things that these computers are good at, and others they are not well suited for. Kawasaki says the key lies in the existence of combinations.

“For example, payroll calculations that use simple multiplication and addition are not problems involving combinations, so are better done with conventional computers,” he explained. “On the other hand, in quantum chemical calculations necessary for things like microfabrication of semiconductors, there is a huge number of combinations, as the many nuclei and electrons in molecules are in an excited state and in a constant state of flux. Such calculations are only possible with a quantum computer.”

One example where quantum computers can demonstrate their strength is in solving what is called the traveling salesman problem: to find the most efficient way to replenish tens of thousands of vending machines by computing all possible combinations of variables, including the location of the vending machines, the breakdown of cargo on each truck and the number of trucks, as well as ever-changing traffic conditions due to traffic accidents and other factors. There are high expectations for quantum computers in this type of logistics field, as well as cryptography, essential for the internet and digital currency; drug development, which requires finding the best candidate from a vast number of molecular combinations; and advancement of machine learning (quantum AI).

In addition, Kawasaki noted that there is another important reason for universities to operate quantum computers — to nurture “quantum natives” who are exposed to quantum technology and pick it up at a young age.

“It is important to increase the number of young people who are familiar with quantum technology, not only future researchers, but also people who will work in banks or become doctors,” the lab director said. “I believe UTokyo having a quantum computer and giving students the opportunity to experience it directly have special significance for the future of Japan and the world.”

In November 2020, IBM held a quantum computer programming contest, IBM Quantum Challenge 2020, where more than 3,300 people from 85 countries participated. The winner was Hironari Nagayoshi, a fourth-year undergraduate student from the Department of Applied Physics in the Faculty of Engineering. The university hopes many quantum natives like Nagayoshi will emerge in the future.