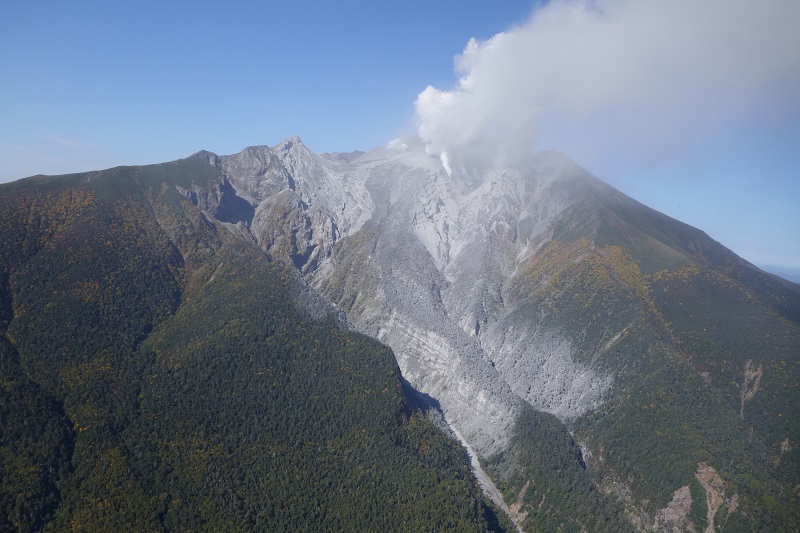 2014 Mount Ontake eruption
Mount Ontake is located 200 km west of Tokyo on the border of Gifu and Nagano Prefectures. This image shows the continued release of steam and gas from the volcano after the eruption.
© 2015 Earthquake Research Institute, The University of Tokyo.

University of Tokyo researchers discovered an increase in a helium isotope during a ten-year period before the 2014 Mount Ontake eruption in central Japan. The finding suggests that this helium isotope anomaly is related to activation of the volcano’s magma system and could be a valuable marker for the long-term risk mitigation concerning volcanic eruptions.

Small quantities of the isotope helium-3 are present in the mantle, while helium-4 is produced in the crust and mantle by radioactive decay. A higher ratio of helium-3 to helium-4 therefore indicates that a sample of helium gas originates from the mantle rather than the crust. Previous research suggested that variation of helium isotopic ratios over time in crater fumaroles and hot springs correlates well with volcanic activity.

However, helium anomalies reported in these studies were all related to magmatic eruptions, and not to hydro-volcanic or phreatic eruptions, caused when a heat source such as magma vaporizes water to steam. Because phreatic eruptions are highly local phenomena, they are extremely difficult to predict. Mount Ontake, which erupted unexpectedly on September 27, 2014 just before noon, is believed to have been a phreatic eruption, and resulted in 58 deaths with 5 still missing.

An international research group lead by Professor Yuji Sano at the Atmosphere and Ocean Research Institute, the University of Tokyo, found that prior to the 2014 eruption, the helium-3 to helium-4 ratio at the hot spring closest to the volcanic cone increased significantly from June 2003 to November 2014, while that at distant hot springs showed no significant change. In addition, the helium isotopic ratios of the closest hot spring remained constant from November 1981 to June 2000.

These findings suggest that helium anomalies are also associated with phreatic eruptions. The research group suggests that increased input of magmatic gas over a ten-year period resulted in the slow pressurization of the volcanic conduit and eventually lead to the eruption.

“We were aware that helium isotopic ratios of the closest hot spring increased significantly from June 2003 to July 2009. At that time we did not understand the reason behind it,” recalls Sano. He adds, “Our findings suggest that the anomaly was related to the 2014 eruption and may have been a precursor. Although this new research does not offer a way to predict an eruption in the short-term, it offers a guide that may be useful for long-term risk management and disaster mitigation.”