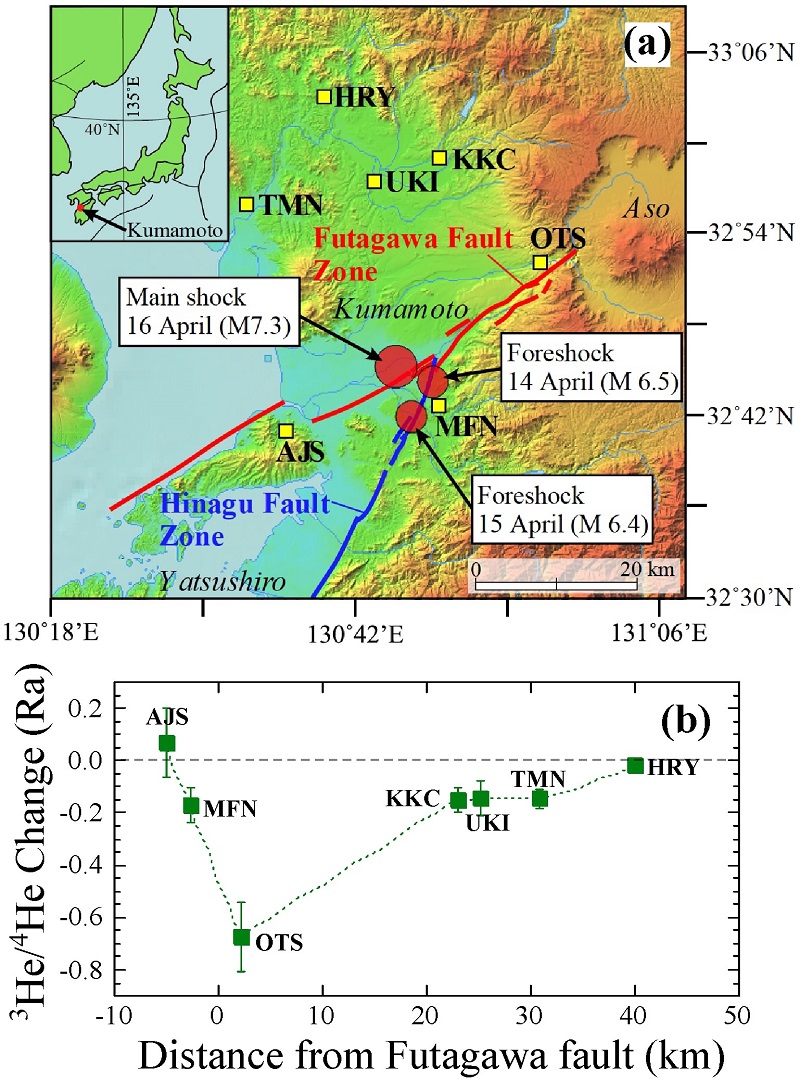 Researchers at the University of Tokyo and their collaborators have revealed a relationship between helium levels in groundwater and the amount of stress exerted on inner rock layers of the earth, found at locations near the epicenter of the 2016 Kumamoto earthquake. Scientists hope the finding will lead to the development of a monitoring system that catches stress changes that could foreshadow a big earthquake.

Several studies, including some on the massive earthquake in Kobe, Japan, in 1995, have indicated that changes to the chemical makeup of groundwater may occur prior to earthquakes. However, researchers still needed to accumulate evidence to link the occurrence of earthquakes to such chemical changes before establishing a strong correlation between the two.

A team of researchers at the University of Tokyo and their collaborators found that when stress exerted on the earth’s crust was high, the levels of a helium isotope, helium-4, released in the groundwater was also high at sites near the epicenter of the 2016 Kumamoto earthquake, a magnitude 7.3 quake in southwestern Japan, which caused 50 fatalities and serious damage.

The team used a submersible pump in deep wells to obtain groundwater samples at depths of 280 to 1,300 meters from seven locations in the fault zones surrounding the epicenter 11 days after the earthquake in April 2016. They compared the helium-4 levels derived from chemical analyses of these samples with those of identical analyses performed in 2010.

“After careful analysis and calculations, we concluded that the levels of helium-4 had increased in samples that were collected near the epicenter due to the gas released by the rock fractures,” says the study’s lead author Yuji Sano, a professor at the University of Tokyo’s Atmosphere Ocean Research Institute.

Furthermore, scientists estimated the amount of helium released by the rocks from the change of helium content in groundwater based on certain assumptions. They also calculated the amount of strain change at the sites for groundwater sample collection using satellite data. Combined, the researchers found a positive correlation between helium amounts in groundwater and the strain change, in which helium content was higher in areas near the epicenter, while concentrations fell further away from the most intense seismic activity.

More studies should be conducted to verify our correlation in other earthquake areas,” says Sano. He continues, “It is important to make on-site observations in studying earthquakes and other natural phenomena, as this approach provided us with invaluable insight in investigating the Kumamoto earthquake.”