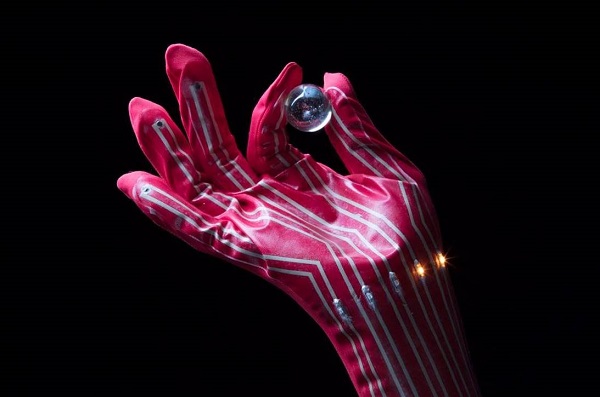 LED-integrated pressure-sensing glove
Each fingertip pressure sensor mounted on this glove is connected to an LED. The intensity of the LEDs varies according to the pressure applied by the fingertips. The glove makes it possible to ascertain degrees of pressure that are difficult to obtain just by examining images.
© 2017 Someya Group, The University of Tokyo.

A newly developed printable elastic conductor retains high conductivity even when stretched to as much as five times its original length, says a Japanese team of scientists. The new material, produced in paste-like ink form, can be printed in various patterns on textiles and rubber surfaces as stretchable wiring for wearable devices incorporating sensors, as well as give human skin-like functions to robot exteriors.

The development of wearable devices such as those monitoring a person’s health or physical performance, like heart rate or muscle activity, is currently underway with some products already on the market. Moreover, with the advent of robots in areas such as health care and retail, in addition to manufacturing, future applications for sensitive elastic conductive material that can withstand high strain from stretching are likely to increase at a fever pitch.

"We saw the growing demand for wearable devices and robots," says Professor Takao Someya at the University of Tokyo’s Graduate School of Engineering, who supervised the current study. "We felt it was very important to create printable elastic conductors to help meet the need and realize the development of the products," he adds.

To achieve a high degree of stretchability and conductivity, the researchers mixed four components to create their elastic conductor. They found that their conductive paste consisting of micrometer-sized silver (Ag) flakes, fluorine rubber, fluorine surfactant—commonly known as a substance that reduces surface tension in liquid—and organic solvent to dissolve the fluorine rubber markedly outperformed the elastic conductor they had previously developed in 2015.

Without stretching, printed traces of the new conductor recorded 4,972 siemens per centimeter (S/cm), high conductivity using the common measure for assessing electrical conductance. When stretched by 200 percent, or to three times its original length, conductivity measured 1,070 S/cm, which is nearly six times the value of the previous conductor (192 S/cm). Even when stretched by 400 percent, or to five times its original length, the new conductor retained high conductivity of 935 S/cm, the highest level recorded for this amount of stretching.

Magnification by a scanning electron microscope (SEM) and transmission electron microscope (TEM) showed that the high performance of the conductor was due to the self-formation of silver (Ag) nanoparticles—one-thousandth the size of the Ag flakes and dispersed uniformly between the flakes in the fluorine rubber—after the conductive composite paste was printed and heated. "We did not expect the formation of Ag nanoparticles," comments Someya on their surprising discovery.

Furthermore, the scientists found that by adjusting variables like the molecular weight of the fluorine rubber, they could control the distribution and population of nanoparticles, while the presence of surfactant and heating accelerated their formation and influenced their size.

To demonstrate the feasibility of the conductors, the scientists fabricated fully printed stretchable pressure and temperature sensors—that can sense weak force and measure heat close to body and room temperatures—wired with the printable elastic conductors on textiles. The sensors, which can be installed easily by laminating onto surfaces by hot pressing with heat and pressure, took precise measurements even when stretched by 250 percent. This is enough to accommodate high-stress flexible areas such as elbows and knees on conformable, form-fitting sportswear or joints on robotic arms often designed to surpass human capabilities and thus undergo higher strain.

The new material, which is durable and suitable for high-capacity printing methods like stencil or screen printing that can cover large surface areas, points to easy installation, and its properties of forming Ag nanoparticles (which are a fraction of the cost of Ag flakes) when printed provide an economical alternative for realizing a wide range of applications for wearables, robotics, and deformable electronic devices. The team is now exploring substitutes for Ag flakes to further reduce costs, while they are also looking at other polymers, like nonfluorine rubbers, and various combinations of materials and processes to fabricate elastic conductors with similar high performance.