Graphs of global sea levels around the time of the poorly understood Last Glacial Maximum (27,000 to 20,000 years ago) previously showed stable ice sheets for about 10,000 years before the ice slowly started to melt. New analysis of the first Great Barrier Reef samples covering the time 22,000 years ago to 19,000 years ago finally adds detail to that period, providing valuable insights for models of climate and ice sheet dynamics.

The research team, led by Professor Yusuke Yokoyama of the University of Tokyo, now divides the Last Glacial Maximum into two distinct periods: 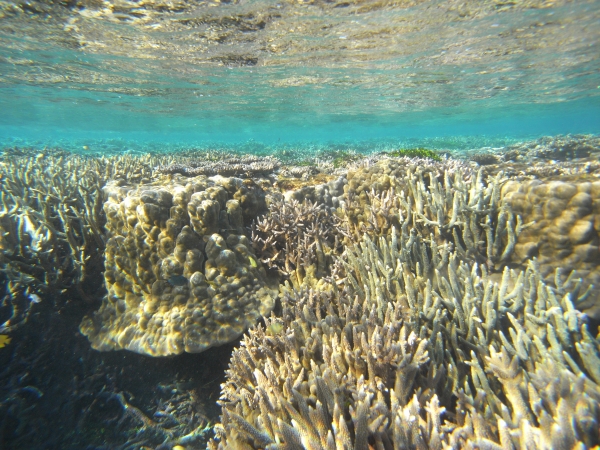 Great Barrier Reef coral in 2010
Coral reefs grow in shallow waters where they remain covered by the sea but still receive sunlight. The remains of ancient reefs can be examined to determine sea levels from long ago. ©2018 Hironobu Kan.

The rapid drop in sea level observed 21,000 years ago is particularly striking because it contradicts current understanding of this period.

"This challenges the paradigm that glacier size can only change slowly, because rapid sea level changes mean water must melt or freeze rapidly," said Yokoyama, lead author of the research paper published in Nature on 26 July 2018.

These rapid shifts in the size of ancient glaciers are significant in the context of modern climate change and its associated impacts. "Current models of glacier dynamics may be too conservative. The possibility of rapid increases or decreases in sea level should be considered," said Yokoyama.

Future climate prediction models are tested by their ability to accurately calculate historic climate parameters that are verified by sample data. All accurate, detailed data about ancient climates are additional points to check the accuracy of climate models.

"Research teams like ours collect data about how the Earth used to be, and then other research groups use those data to continuously improve their models of the future climate," said Yokoyama.

"It's really important to understand the size and location of ice sheets because large bodies of ice act like a freezer for the local environment — glaciers change ocean temperature and salinity, which affect ocean conditions. Understanding ancient sea levels can reveal geological structures, such as land bridges, that could have been important for migration routes or species separation," said Yokoyama.

Collecting from the reef

In 2010, Yokoyama was the co-chief scientist of the international Integrated Ocean Drilling Program Expedition 325: Great Barrier Reef Environmental Changes. Associate Professor Jody Webster from the University of Sydney, School of Geosciences was also co-chief scientist on the expedition. The research team spent two months on the 93.6-meter-long research vessel Greatship Maya collecting fossil coral reef samples. The reef cores analyzed in this study came from two sites: Hydrographers Passage offshore of Mackay and Noggin Pass offshore of Cairns, both on the East Coast of the Australian state of Queensland. 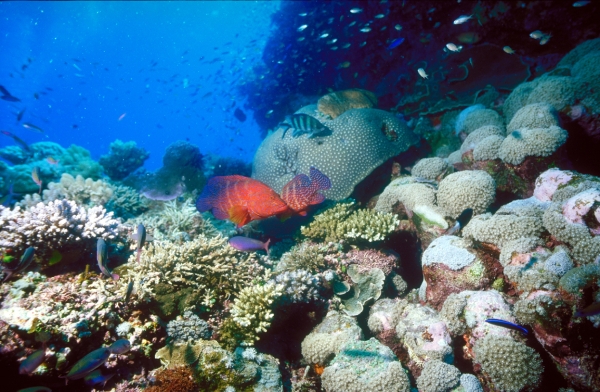 Collecting fossil corals from the Last Glacial Maximum is technically and logistically challenging.

"We sampled coral from 90 meters to 130 meters below the current sea level. It's difficult to collect data anywhere between 50 and 200 meters underwater; divers usually can't go below 30 meters and ship captains prefer to not go shallower than 200 meters," said Yokoyama.

The Great Barrier Reef was selected as the coral core sample site because it can reveal a uniquely clear picture of past glacier ice sheet behavior. The reef's tropical position near the equator means it was and remains far from the immediate influence of glacier ice sheets, so sea level changes local to the Great Barrier Reef reflect global changes.

Additionally, the Australian tectonic plate has minimal seismic activity, so earthquakes did not change the position of the reef. The gentle sloping structure of the ancient Great Barrier Reef also meant researchers could physically collect the samples they need.

"Sites close to the former ice sheets cannot provide accurate sea level histories because over time they are overwritten by large deformations of the Earth," said Yokoyama. 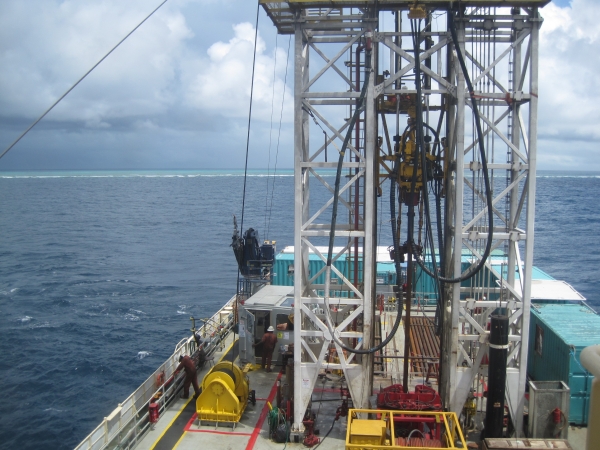 View towards Cairns, Australia, from Greatship Maya on a research voyage collecting data about ancient sea levels
The Greatship Maya is about to start sample collection using a research drill (center) over the remains of ancient portions of the Great Barrier Reef, now submerged in deep water. In the distance, waves break over the modern Great Barrier Reef in shallow waters. ©2018 Yusuke Yokoyama.

Researchers studied the structure of coral and algae layers within coral core samples to determine water depth. Advanced radiocarbon and uranium-thorium dating results provided by the team at the University of Tokyo identified when water was at particular levels. Researchers combine time and depth data to determine when global average sea levels would have reached certain depths.

"Two death events of reefs are very clear in the coral cores we examined," said Yokoyama.

When the ice sheets grew, the global sea level fell so the coral dried out and died, but coral in deeper waters survived. If the water becomes too deep, sunlight and nutrients become unavailable and the reef can drown.

These two death events are consistent with a drop in sea level and a subsequent rise. The ages of the two death events suggest that both happened over only 4,000 years, which researchers remark is particularly abrupt.

Webster led the team of reef scientists from Spain, Japan, and the U.S. responsible for interpreting ecological data used to track reef habitat depth, and therefore relative sea level, over time. That information was then combined with radiometric data and used by Yokoyama and his team to model fluctuations in the vertical position of the seafloor caused by changes in water or ice volume. The combined results clarified ice sheet dynamics during the poorly understood Last Glacial Maximum period.

"Fossil coral reefs were very sensitive to environmental changes, so by examining the biological assemblages in the cores we were able to reconstruct how ancient water depths changed through time," said Webster.

Research figure of ancient Great Barrier Reef coral samples collected in 2010
Layers of coral remains are examined to identify characteristic species that grow at specific depths. Radiocarbon and uranium-thorium dating of those samples then identify the age of the sample. Age and depth data are combined to determine when global average sea levels would have reached certain depths. ©2018 ECORD/IODP.

No living coral is harmed during the collection process of drilling into the remains of ancient reefs. Active coral reefs grow in shallow waters where sunlight can reach them and the sea keeps them wet. The coral core samples from Integrated Ocean Drilling Program Expedition 325 are stored long-term in an official Japanese IODP core facility at Kochi University.