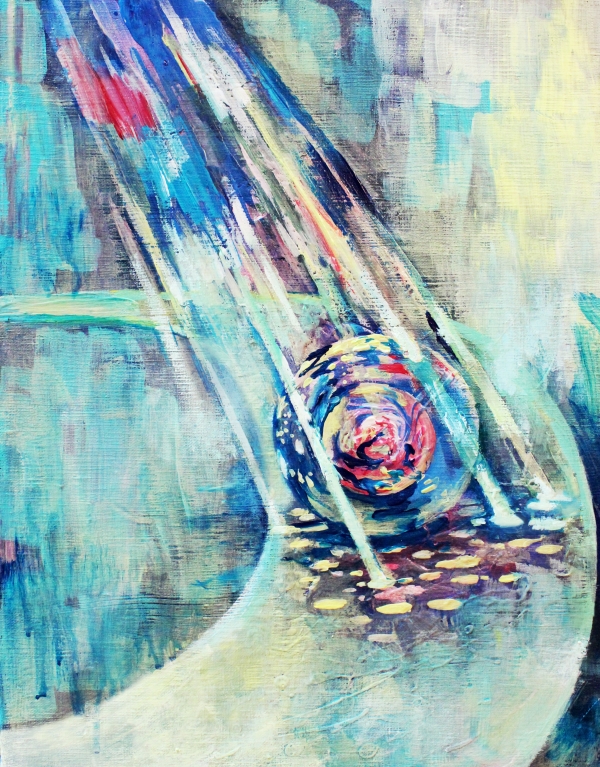 Artist's representation of a cell moving through the Ghost Cytometry system.
Ghost Cytometry is an image-free visual system enabled with artificial intelligence to quickly identify and sort cells. The technology has research, clinical, and industrial applications for classifying and selectively isolating single cells with high accuracy and throughput. Image by Sacco Fujishima. Re-use only with attribution. Creative Commons license CC BY-ND.

A team made of a scientific start-up company and academic researchers has invented a new cell identification and sorting system called Ghost Cytometry. The system combines a novel imaging technique with artificial intelligence to identify and sort cells with unprecedented high-throughput speed. The scientists leading the project hope that their method will be used to identify and sort cancer cells circulating in patients' blood, enable faster drug discovery, and improve the quality of cell-based medical therapies.

"Ghost Cytometry will help researchers who need to classify cells in the lab, and benefit clinicians and patients who need fast and accurate isolation and diagnosis of cell samples," said Associate Professor Sadao Ota from the University of Tokyo.

In an article published in the June 15, 2018, issue of Science, the researchers demonstrated that Ghost Cytometry can sort at least two different types of cells with similar sizes and structures with very few misidentified cells. Ghost Cytometry can identify cells at a rate of more than 10,000 cells per second and sort cells into appropriate groups at a rate of multiple thousands of cells per second. Existing cell-sorting machines cannot distinguish between cell types with such similar appearances. Human experts using microscopy routinely identify and sort fewer than 10 cells per second, sometimes with less accuracy.

The Ghost Cytometry name refers to how the technique analyzes minimal light wave data without transforming any of that light data into a picture; it is image-free imaging technology. Current methods to identify different types of cells rely on microscope images of the cells, which are then classified by either a computer image recognition program or human observer. Relying on full images has made real-time, high-throughput cell sorting an elusive goal.

"At the beginning of this project, we were a small team of young scientists in a poorly equipped room. Due to our limited resources, we focused on the most efficient way of using information rather than creating better hardware. This led us to the idea of not developing new image-based techniques in a conventional fashion, but instead to transform visual information into a format that allows rapid processing via machine learning," said Ota. Ota is part of the interdisciplinary research group of optical imaging specialists, bioengineers, biophysicists, and machine learning experts who developed the technique. Some members of the research team also founded ThinkCyte, a company that aims to commercialize the equipment.

"Sometimes there are no stains, dyes, or other biomarkers that can effectively label different types of cells or different activation states of the same cell. That is one time when Ghost Cytometry can be especially valuable for clinicians, patients, and researchers," said Ota.

In Ghost Cytometry, cells rush one at a time though a narrow channel underneath a single pixel detector camera that senses the fluorescent light waves emitted by each cell. This interpretation of light waves without needing to transform them into a full image is what makes Ghost Cytometry an image-free visual system. An electrical circuit equipped with machine learning algorithms is attached to the single pixel detector camera and learns the unique light wave pattern of each cell type to identify cells within 10 microseconds. The circuit then sends an electrical signal to push cells into the correct sorting pathway for their type as they flow past.

The machine learning system does not need images to analyze the cells, but if researchers require images for additional analysis, the single pixel detector camera does capture enough information to digitally reconstruct traditional, two-dimensional pictures of cells that pass through the cytometry system.

This is the first ultrafast fluorescence imaging-activated cell sorting technology and it can isolate a specific cell type from a mix of physically similar cells at high-throughput. ThinkCyte plans to start oncology and regenerative medicine clinical research projects using Ghost Cytometry in collaboration with research institutes this year. The company has also developed a research prototype of the Ghost Cytometry equipment and plans to commercialize a research-use beta product in 2019.

Collaborators from JST PRESTO, Osaka University, RIKEN, and the Japan Aerospace Exploration Agency also contributed to the work. The start-up company ThinkCyte is hosted in part at the University of Tokyo Entrepreneur Plaza.