For the first time researchers have demonstrated a new way to perform functions essential to future computation three orders of magnitude faster than current commercial devices. The team lead by Associate Professor Shinobu Ohya, created a nanoscale spintronic semiconductor device that can partially switch between specific magnetic states trillions of times a second (terahertz — THz), far beyond frequencies of devices at present.

There’s a high chance you’ve purchased a computer or smartphone sometime this decade. When you looked at the description you may have noticed the speed of such devices is often measured in gigahertz (GHz). At present most devices are around a few gigahertz. But progress accelerates and new ways are sought to increase the frequency and performance of our devices. To this end, UTokyo researchers from the Graduate School of Engineering and Graduate School of Frontier Sciences explore the emerging field of spintronics.

“I hope our research leads to spintronic-based logic and memory devices,” said Ohya. “Within decades people should see spintronic smartphones and data centers. We would realize incredible performance gains in areas such as artificial intelligence and beyond.”

Spintronics, aka “spin electronics,” exploits an intrinsic property of electrons called spin, — responsible for magnetic behavior — to perform functions. For example, computation relies on switchable states of a physical material as a way to transfer information. Famously, the 1 and 0 comprising binary code are represented by voltage levels in communication wires or magnetic states of a magnetic metal in a hard drive. The faster the switch between states, the greater the device’s performance. In spintronic devices, discrete spin magnetization states represent binary digits. 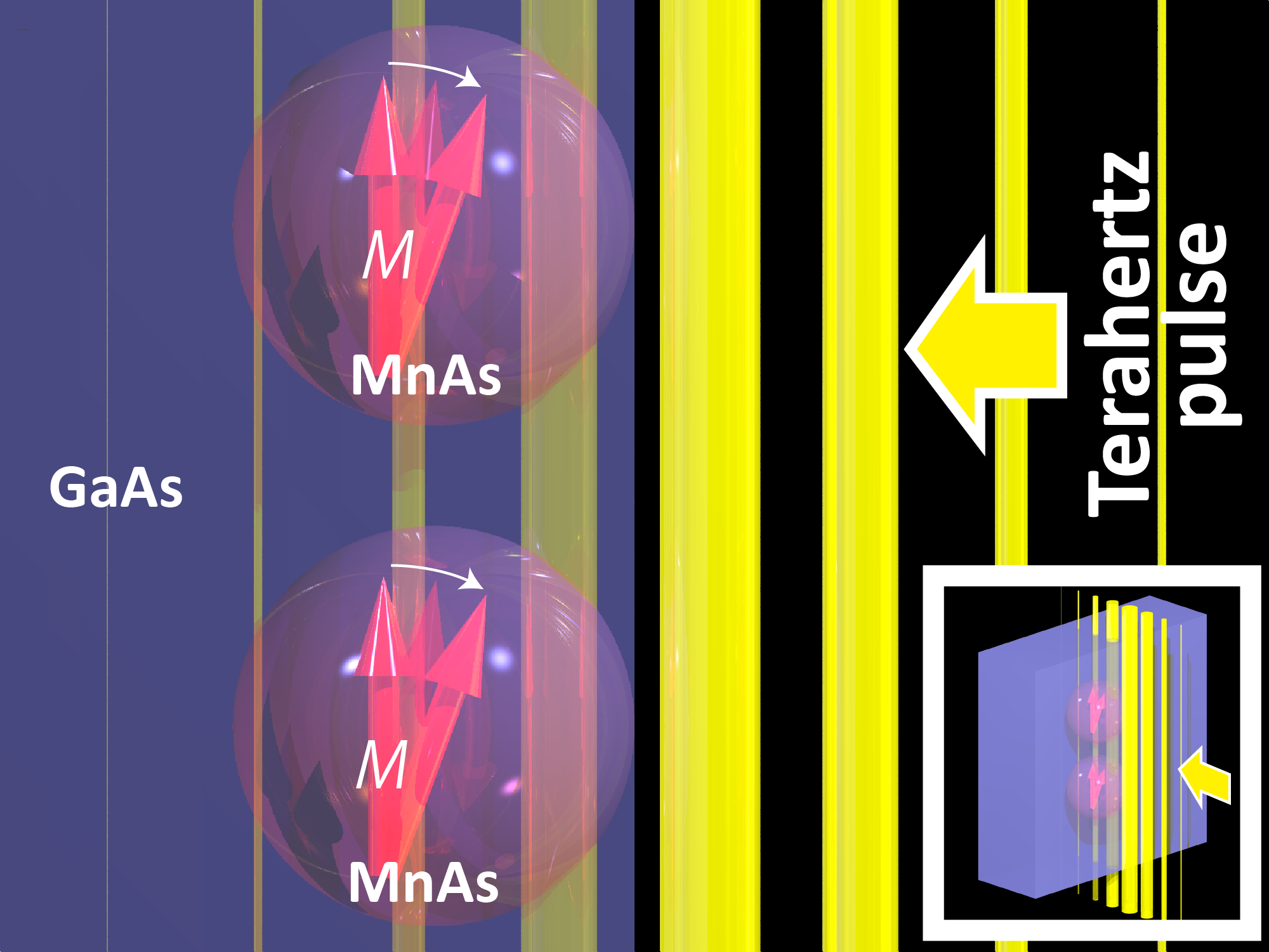 The Ohya research group successfully affected spin by 20 percent in under a picosecond. This is a promising technique for ultrafast nonvolatile memory devices. ©2019 Ohya Laboratory.

One way researchers create this property is to irradiate a special magnetic material with short but high-frequency pulses of terahertz radiation, similar to that of airport body scanners. The radiation flips electron spins in this material — ferromagnetic manganese arsenide (MnAs) — and thus its magnetization, in under a picosecond, three orders of magnitude quicker than transistors switch in microchips. Other researchers have attempted this before but the magnetic change in response to the pulses was only 1 percent, too small to be of practical use.

Now, however, Ohya and his team successfully demonstrated a larger magnitude change in magnetization of MnAs nanoparticles subjected to terahertz pulses. This greater response of 20 percent means it could be more useful in research and hints at possible future applications. Their trick was to take advantage of the electric component of the terahertz electromagnetic radiation rather than the magnetic component.

“Until now researchers in this area used ferromagnetic metal films to study terahertz modulation of magnetization, but these impeded the radiation’s energy,” said Ohya. “Instead we embedded our ferromagnetic nanoparticles in a semiconductor film 100 nanometers thick. This hinders the radiation far less so the terahertz electric field uniformly reaches and flips the spins, and therefore magnetization, of the nanoparticles.”