Rhythmic waves of brain activity cause us to see or not see complex images that flash before our eyes. An image can become practically invisible if it flashes before our eyes at the same time as a low point of those brain waves. We can reset that brain wave rhythm with a simple voluntary action, like choosing to push a button.

The new results come from experts who use optical illusions to understand human vision. Human sight involves activity both in the eyes and in the brain. Optical illusions are formed by playing tricks on any part of our complex visual system.

“This is the first record of rhythmic brain activity used to achieve integrated visual perception,” said Associate Professor Isamu Motoyoshi from the University of Tokyo and co-author of the recent research publication.

Reoccurring rhythms of attention and perception

Previous research identified that attention fluctuates six to eight times per second (6 to 8 Hertz), a rate researchers refer to as theta rhythms.

The recent investigation started when Motoyoshi and colleagues were studying the Gabor pattern illusion, in which a smoothly moving circle appears to jump across the screen.

The circle of black and white lines may appear to jump, but is actually moving smoothly across the screen. Researchers can change how fast the circle actually moves and it will still appear to jump at the same rate. This effect is likely caused by fluctuating levels of attention called theta rhythm brain waves. Image Credit: Nakayama et al. 2018, originally published in Scientific Reports, DOI: 10.1038/s41598-018-24131-6

Viewers saw jumps at a constant rhythm regardless of the actual speed of the illusion. The rhythm of jumps in the optical illusion was remarkably similar to the theta rhythm of brain waves related to attention.

“That led us to want to study rhythms of attention and visual perception in more detail,” said Motoyoshi. 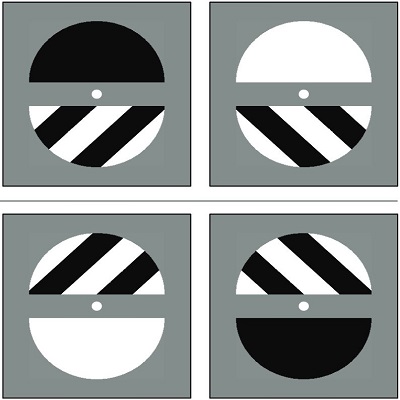 Any two of these images would flash briefly onscreen some unpredictable time after volunteers pushed a button to start the test. Viewers had to identify both the light intensity (white or black color) and the orientation of the image (left or right diagonal lines). Image Credit: Nakayama and Motoyoshi 2019, originally published in The Journal of Neuroscience DOI: 10.1523/JNEUROSCI.2494-18.2019

In their recent experiments, researchers asked participants to push a button to begin each trial, whenever they felt ready. Then after some unpredictable wait time, two images would quickly flash on a computer screen, one after the other. Participants then reported which images they saw.

“These tests are considered high cognitive load tasks. You have to identify both the light intensity - white or black color - and the orientation of the image - left or right diagonal lines,” said Ryohei Nakayama, Ph.D., previously a project researcher in Motoyoshi’s lab and a currently a researcher at the University of Sydney, Australia.

Volunteers would push a button and then at some unpredictable length of time afterwards (between 50 and 800 milliseconds) two images would briefly flash onscreen. Volunteers then had to report the color (black or white) and orientation (left or right diagonal lines) of the two images they had seen. This video shows a slowed-down version of the test and the almost actual speed of the test. Volunteers performed up to 2,000 individual trials of the test. Original images by Ryohei Nakayama

You can’t see what you don’t pay attention to 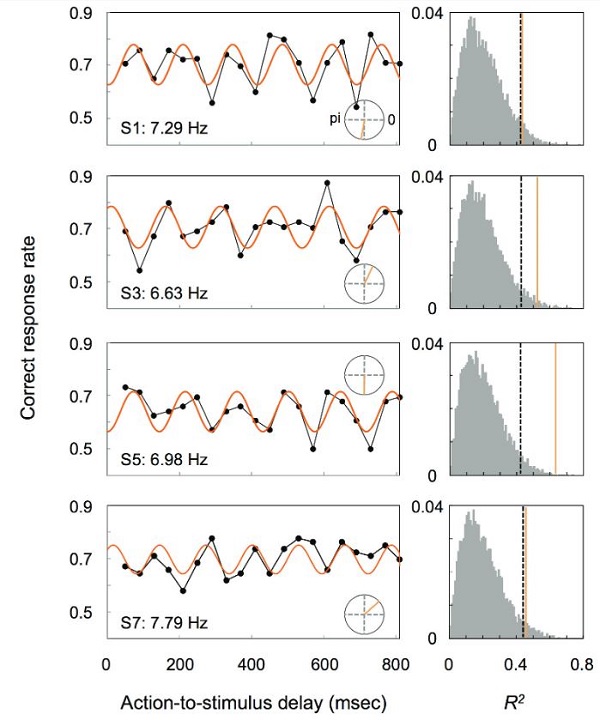 High points of brain waves and correct answers occur at similar times. Participants’ theta rhythm brain waves were measured by EEG (conceptually illustrated by orange lines) while an image was flashed before their eyes. Volunteers were more likely to correctly report (black lines) what image they had seen if the image was flashed at the same time as a high point of their attention brain wave. Image Credit: Nakayama and Motoyoshi 2019, originally published in The Journal of Neuroscience DOI: 10.1523/JNEUROSCI.2494-18.2019

The wait time between the button push and the image flash was between 50 to 800 milliseconds long. In that length of time, theta rhythm brain waves can fluctuate four to seven times.

Theoretically, an image could become functionally invisible if it always flashed in time with the low points of theta rhythm attention brain waves.

“But, it is unlikely that one specific brain region is important for attention. Instead, we think the new story is that periodic rhythmic waves of brain activity are required for both visual perception and attention,” he continued.

Motoyoshi and Nakayama hope that their ongoing visual perception research will continue to reveal the complexities of consciousness.