Magic numbers make nickel nucleus stronger Researchers made magic with nickel, but this was no coin trick Research news 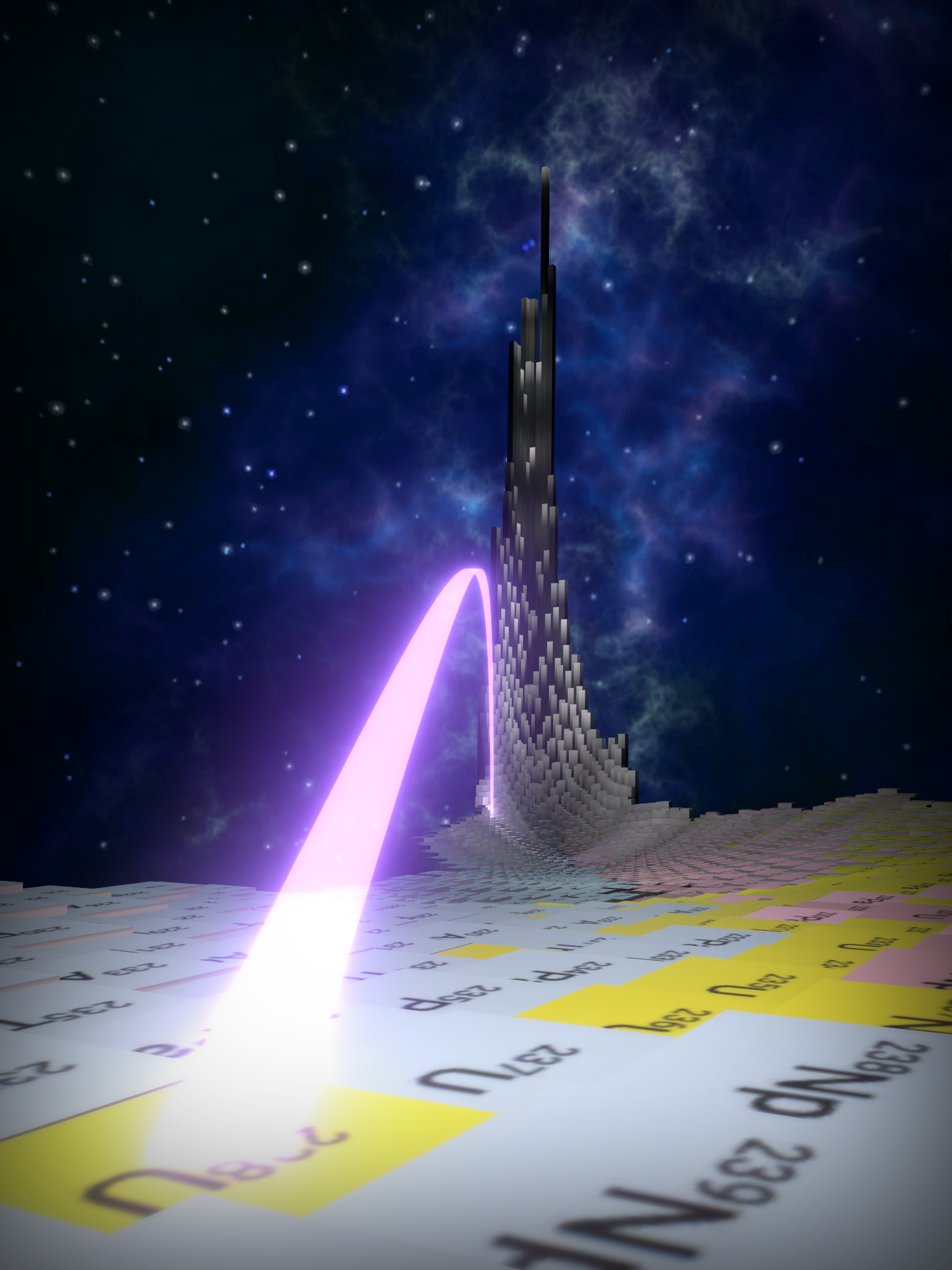 An artistic rendering to visualize the landscape of isotopes. The purple line connects 78Ni with 238U, the substance from which researchers created their sample. Image: © 2019 Bajo-kanna - with permission

Researchers provide the first direct evidence for a rare kind of atomic nucleus. The special nickel nucleus (78Ni) is an isotope of typical nickel (58Ni), meaning they share the same number of protons but a different number of neutrons. Usually more neutrons make isotopes less stable, but this isotope is special. 78Ni is more tough or rigid than other nickel isotopes with similar numbers of neutrons — it takes more energy to excite 78Ni into a different state.

A typical nickel atom has 28 electrons (negative charges) surrounding a nucleus of 28 protons (positively charged nucleons) and 30 neutrons (neutral nucleons). Seventy percent of all nickel in the world is like this. The greater the disparity between neutrons and protons in nickel, the more susceptible it is to the destabilizing effect known as beta-decay. However even though 78Ni has many more neutrons than typical nickel isotopes, it is tougher than most of them.

So why is 78Ni so special and what makes it so rigid?

It’s because of magic, but not the Harry Potter kind. In nuclear physics, magic numbers refer to a number of protons or neutrons that are said to form complete shells within the nucleus, structures that are more robust than incomplete shells. The idea of these shells is somewhat euphemistic as we’re talking about the quantum domain where the logic of everyday experience doesn’t apply. But a complete shell in this case relates to the strength of the nucleus. It takes more energy to excite and destabilize nuclei with complete shells.

“As far as we’re aware 78Ni does not exist on Earth, so to study it we had to make some,” said Taniuchi. “To do this we had to break apart some heavy uranium, 238U, which is good for making neutron-rich nuclei. For this we used the powerful Radioactive Isotope Beam Factory (RIBF) at RIKEN in Japan.”

The researchers used RIBF to smash 238U particles on a target to induce an artificial fission (splitting) reaction. 78Ni was one of the products of the reactions they set up. Instruments at RIBF also allowed them to probe the sample they created. To do this the researchers observed gamma rays (a kind of radiation) from their excited 78Ni sample and recorded their characteristics. In this case, Taniuchi and colleagues looked for a telltale signature in the gamma-ray data to confirm their hypothesis.

“This was an extremely difficult task and took a long time, but it was worth it for my Ph.D. You need sufficient data to identify the doubly magic characteristic and we struggled to get that despite access to the world-leading accelerator facility, RIBF,” said Taniuchi. “After the experiment, colleagues from around the world helped analyze the data. Results suggest 78Ni is doubly magic, but also that the magic nature suddenly disappears in isotopes beyond 78Ni.” 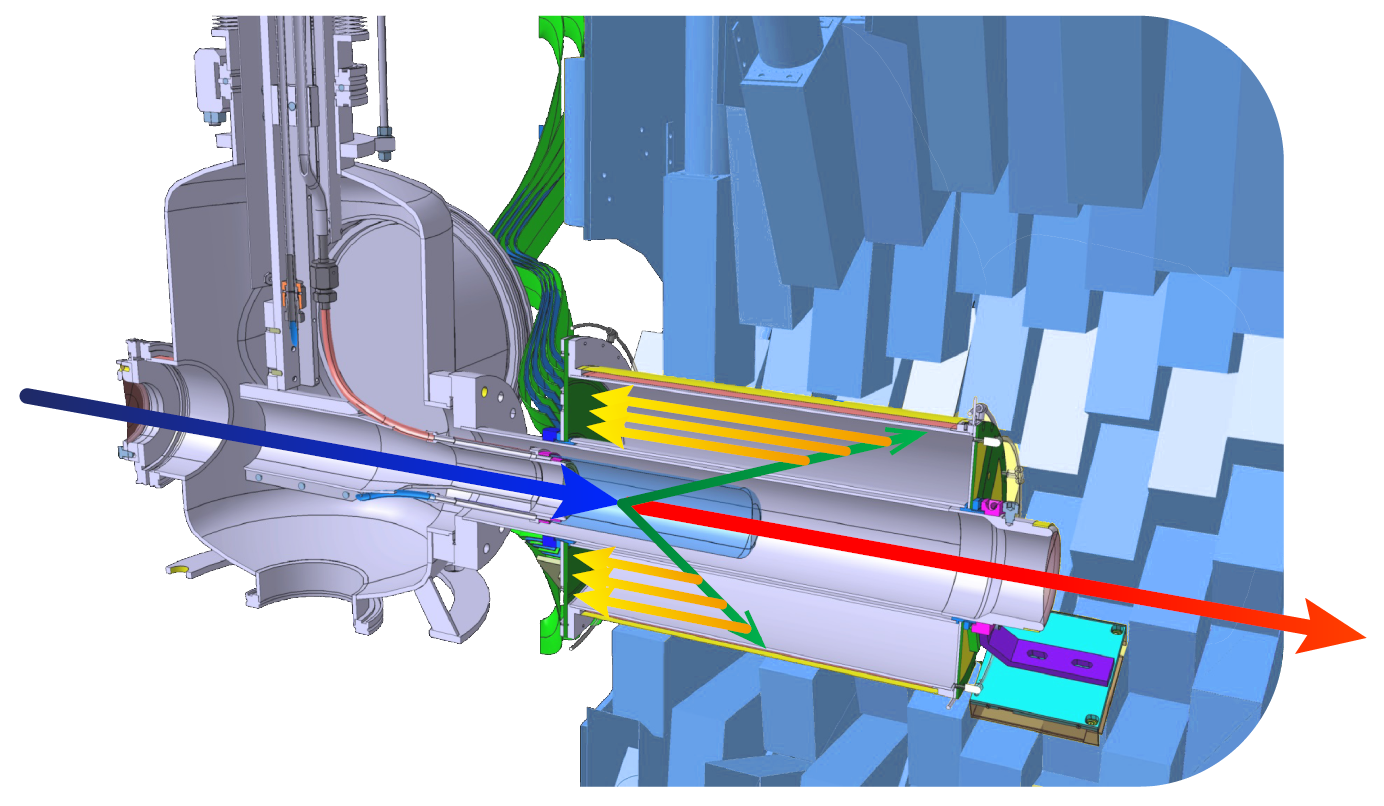 A schematic view of the sophisticated target and gamma-ray detector at RIBF. Image: © 2019 Ryo Taniuchi

You might wonder what is so important about 78Ni in the first place. Its existence may actually be pivotal to understanding the origin of matter. Life may not have been possible without it.

“The Earth as we know it would not be the same without certain heavy elements, so it’s important to know where these came from. We know that many are made in supernova explosions — the death throes of giant stars — or even in collisions between neutron stars,” explained Taniuchi. “There is strong reason to believe that 78Ni and unstable nuclei beyond play a significant role in this process — called nucleosynthesis. As a consequence of our discovery, researchers exploring this fascinating field can create better ideas about the origin of matter.”