All in the angles 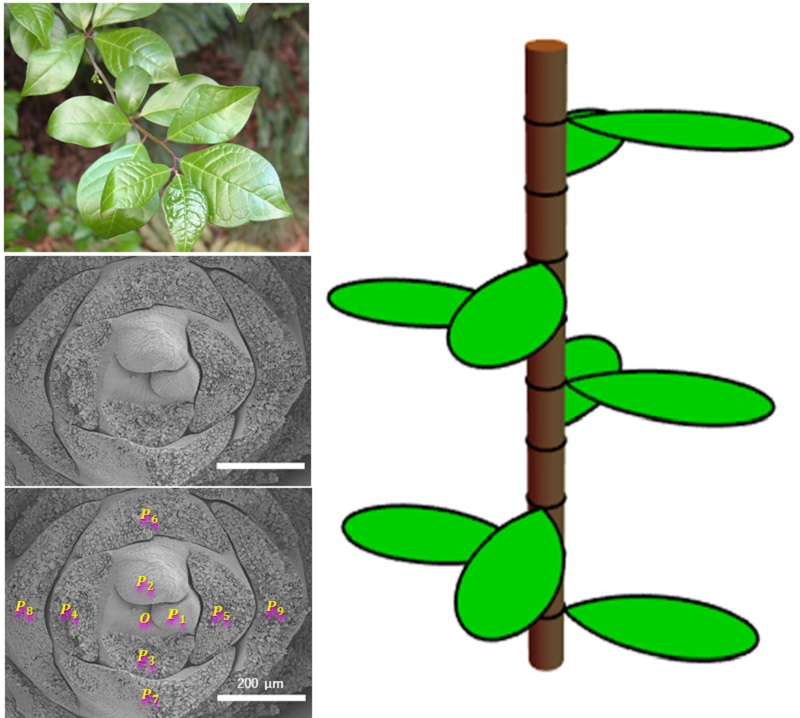 Leaves on an O. japonica branch (upper left) and a schematic diagram of orixate phyllotaxis (right). The orixate pattern displays a peculiar four-cycle change of the angle between leaves (180 degrees to 90 degrees to 180 degrees to 270 degrees). A scanning electron microscope image (center and bottom left) shows the winter bud of Orixa japonica, where leaves first begin to grow. Primordial leaves are labeled sequentially with the oldest leaf as P8 and the youngest leaf as P1. The label O marks the shoot apex.

To identify the leaf arrangement of a plant species, botanists measure the angle between leaves, moving up the stem from oldest to youngest leaf.

Common patterns are symmetrical and have leaves arranged at regular intervals of 90 degrees (basil or mint), 180 degrees (stem grasses, like bamboo), or in Fibonacci golden angle spirals (like the needles on some spherical cacti, or the succulent spiral aloe).

The peculiar pattern that Sugiyama’s research team studied is called “orixate” after the species Orixa japonica, a shrub native to Japan, China, and the Korean peninsula. O. japonica is sometimes used as a hedge.

"Our research has the potential to truly understand beautiful patterns in nature," said Sugiyama.

The math of a plant

Leaf arrangement has been modeled mathematically since 1996 using an equation known as the DC2 (Douady and Couder 2). The equation can generate many, but not all, leaf arrangement patterns observed in nature by changing the value of different variables of plant physiology, such as the relationships between different plant organs or strength of chemical signals within the plant.

The DC2 has two shortcomings that researchers wanted to address:

1) No matter what values are put into the DC2 equation, certain uncommon leaf arrangement patterns are never calculated.

2) The Fibonacci spiral leaf arrangement pattern is by far the most common spiral pattern observed in nature, but is only modestly more common than other spiral patterns calculated by the DC2 equation.

At least four unrelated plant species possess the unusual orixate leaf arrangement pattern. Researchers suspected that it must be possible to create the orixate pattern using the fundamental genetic and cellular machinery shared by all plants because the alternative possibility — that the same, very unusual leaf arrangement pattern evolved four or more separate times — seemed too unlikely.

One fundamental assumption used in the DC2 equation is that leaves emit a constant signal to inhibit the growth of other leaves nearby and that the signal gets weaker at longer distances. Researchers suspect that the signal is likely related to the plant hormone auxin, but the exact physiology remains unknown.

“We changed this one fundamental assumption — inhibitory power is not constant, but in fact changes with age. We tested both increasing and decreasing inhibitory power with greater age and saw that the peculiar orixate pattern was calculated when older leaves had a stronger inhibitory effect,” said Sugiyama.

This insight into the inhibitory signal power changing with age may be used to direct future studies of the genetics or physiology of plant development.

Researchers call this new version of the equation the EDC2 (Expanded Douady and Couder 2).

First author of the research paper, doctoral student Takaaki Yonekura, designed computer simulations to generate thousands of leaf arrangement patterns calculated by EDC2 and to count how often the same patterns were generated. Patterns that are more commonly observed in nature were more frequently calculated by the EDC2, further supporting the accuracy of the ideas used to create the formula.

“There are other very unusual leaf arrangement patterns that are still not explained by our new formula. We are now trying to design a new concept that can explain all known patterns of leaf arrangement, not just almost all patterns,” said Sugiyama.

Do it yourself — ID the pattern

Experts recommend looking at a group of relatively new leaves when identifying a plant’s leaf arrangement, or phyllotaxis, pattern. (In Greek, phyllon means leaf.) Older leaves may have turned (due to wind or sun exposure), which can make it difficult to identify their true angle of attachment to the stem.

Think of the stem as a circle and begin by carefully observing where on the circle the oldest and second-oldest leaves are attached. The angle between those two leaves is the first “angle of divergence.” Continue identifying the angles of divergence between increasingly younger leaves on the stem. The pattern of angles of divergence is the leaf arrangement pattern.