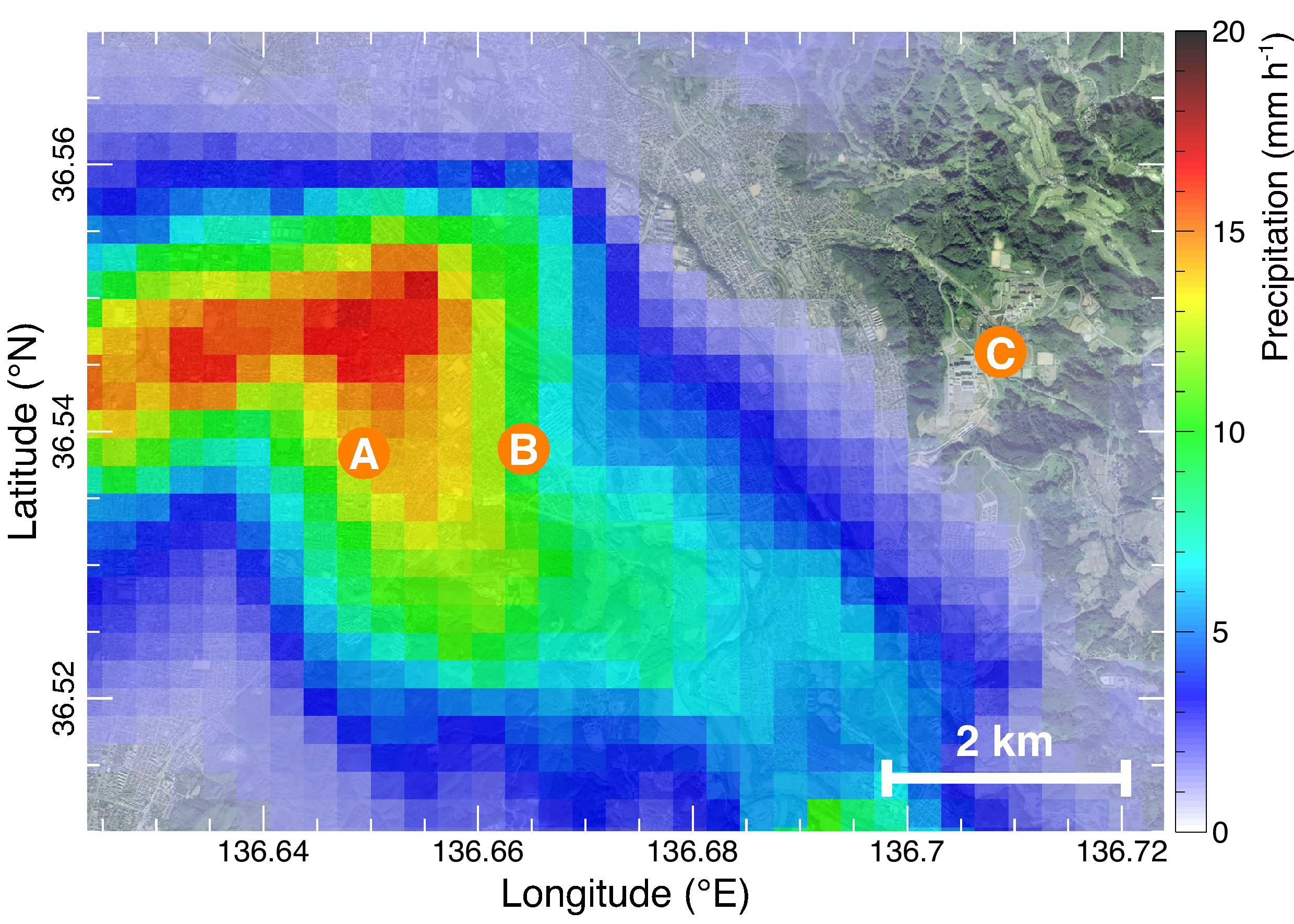 A thundercloud over the city of Kanazawa. The gamma-ray glow terminated abruptly around location B. The lightning struck between locations A and B. Image: © 2019 Yuuki Wada

University of Tokyo graduate student Yuuki Wada with colleagues from Japan discover a connection between lightning strikes and two kinds of gamma-ray phenomena in thunderclouds. The research suggests that in certain conditions, weak gamma-ray glows from thunderclouds may precede lightning bolts and their accompanying gamma-ray flashes.

In the city of Kanazawa, Ishikawa Prefecture, in central Japan, Wada and colleagues work with local schools and businesses to install radiation monitors onto buildings. These radiation monitors are not there due to some worry about local radiation levels, though. They form a network, the purpose of which is to detect radiation coming from the sky. It may surprise some, but it’s been known for around 30 years that thunderstorms can bring with them gamma-ray activity.

“Forever, people have seen lightning and heard thunder. These were the ways we could experience this power of nature,” said Wada. “With the discovery of electromagnetism, scientists learned to see lightning with radio receivers. But now we can observe lightning in gamma rays - ionizing radiation. It’s like having four eyes to study the phenomena.” 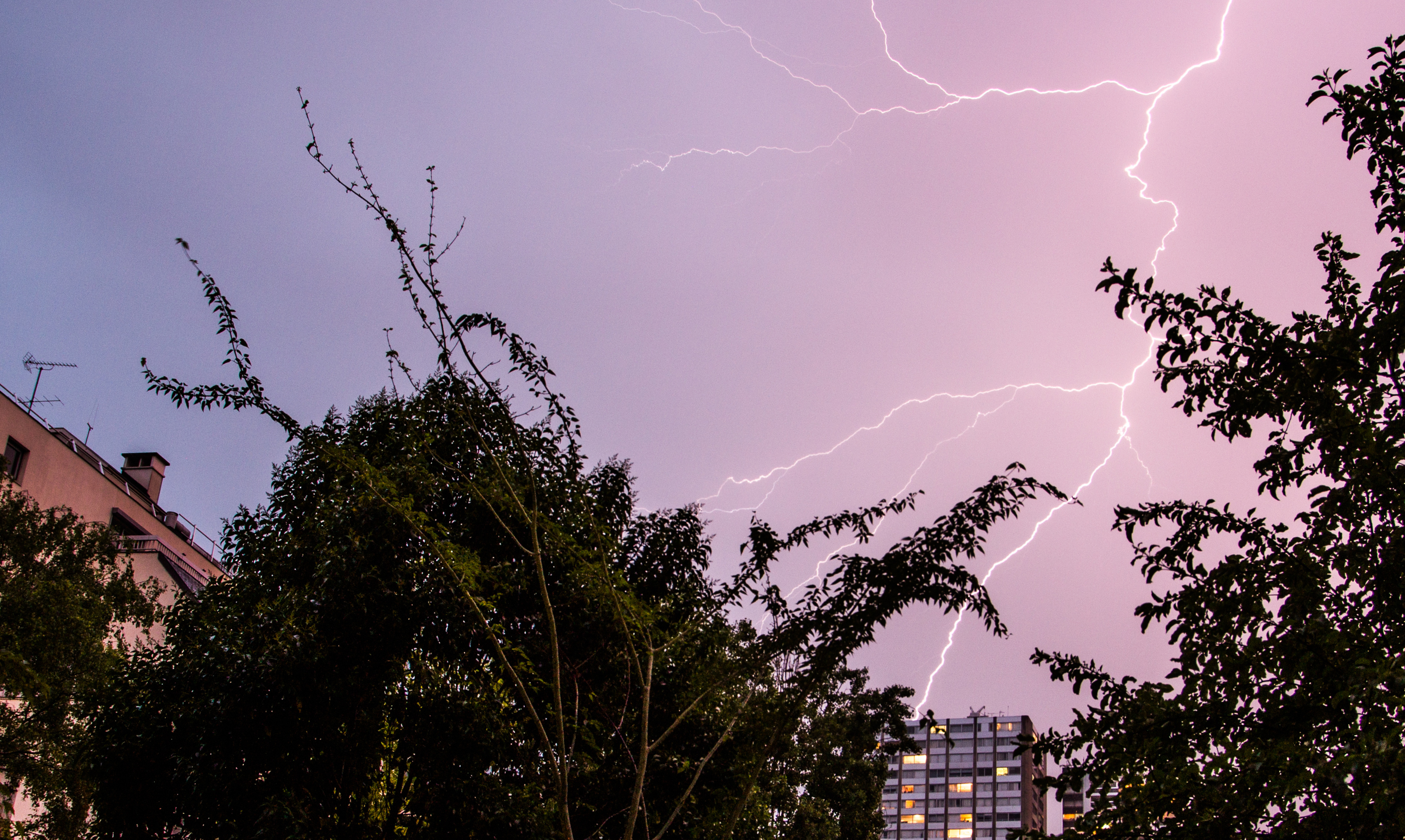 A thundercloud can carry over 1 billion volts of electricity. Image: © 2019 Yuuki Wada

There are two known kinds of gamma-ray phenomena associated with thunderclouds: gamma-ray glows, weak emissions which last about a minute, and short-lived terrestrial gamma-ray flashes (TGFs), which occur as lightning strikes and are much more intense than gamma-ray glows. Both occur in regions of thunderclouds sandwiched between layers of varying charge. The charged regions accelerate electrons to near the speed of light. At these speeds, referred to as relativistic, electrons that stray very close to the nuclei of nitrogen atoms in the air slow down a little and emit a telltale gamma ray. This is called bremsstrahlung radiation.

“During a winter thunderstorm in Kanazawa, our monitors detected a simultaneous TGF and lightning strike. This is fairly common, but interestingly we also saw a gamma-ray glow in the same area at the same time,” continued Wada. “Furthermore, the glow abruptly disappeared when the lightning struck. We can say conclusively the events are intimately connected and this is the first time this connection has been observed.”


The mechanism underlying lightning discharge is highly sought after and this research may offer previously unknown insights. Wada and team intend to further their investigation to explore the possibility that gamma-ray glows don’t just precede lightning strikes, but may in fact cause them. Radiation levels of the gamma-ray flashes are quite low, approximately a tenth the level one may receive from a typical medical X-ray.

“Our finding marks a milestone in lightning research and we will soon double our number of radiation sensors from 23 to about 40 or 50. With more sensors, we could greatly improve predictive models,” explained Wada. “It’s hard to say right now, but with sufficient sensor data, we may be able to predict lightning strikes within about 10 minutes of them happening and within around 2 kilometers of where they happen. I’m excited to be part of this ongoing research.”

Further investigations will likely still take place in Kanazawa as the area has rare and ideal meteorological conditions for this kind of work. Most radiation observations in storms come from airborne or mountain-based stations as thunderclouds are generally very high up. But winter storms in Kanazawa bring thunderclouds surprisingly close to the ground, ideal for study with the low-cost portable monitors developed by the research team.

The researchers created these unique portable radiation monitors in part with technology derived from space-based satellite observatories designed for astrophysics experiments. This is appropriate as the data from this kind of research could be useful for those who research astrophysics and in particular solar physics in the context of particle acceleration. But there is a more down-to-earth offshoot as well.

“Paleontologists who study life from the last 50,000 years or so use a technique called carbon-14 dating to determine the age of a sample. The technique relies on knowledge of the levels of two kinds of carbon, carbon-12 and carbon-14,” said Wada. “It’s commonly thought carbon-14 is created by cosmic rays at a roughly constant rate, hence the predictive power of the technique. But there’s a suggestion thunderstorms may alter the ratio of carbon-12 to carbon-14, which may slightly change the accuracy of or calibration required for carbon-14 dating to work.”

Wada and colleagues will continue to unpick the mysteries of lightning, one of nature's most captivating and iconic phenomena. An upcoming collaborative project based in France will launch a dedicated satellite for worldwide lightning observations from space. 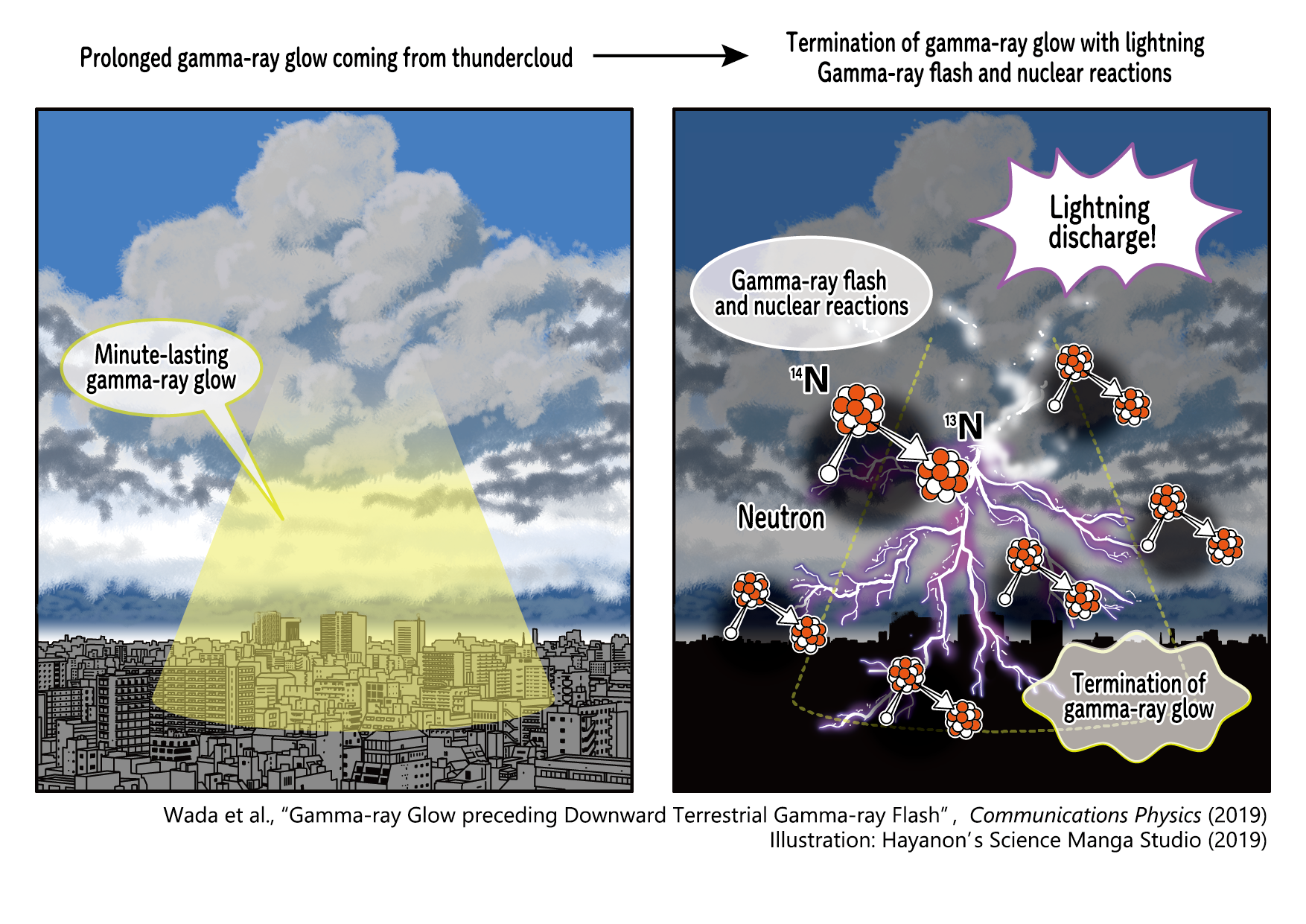